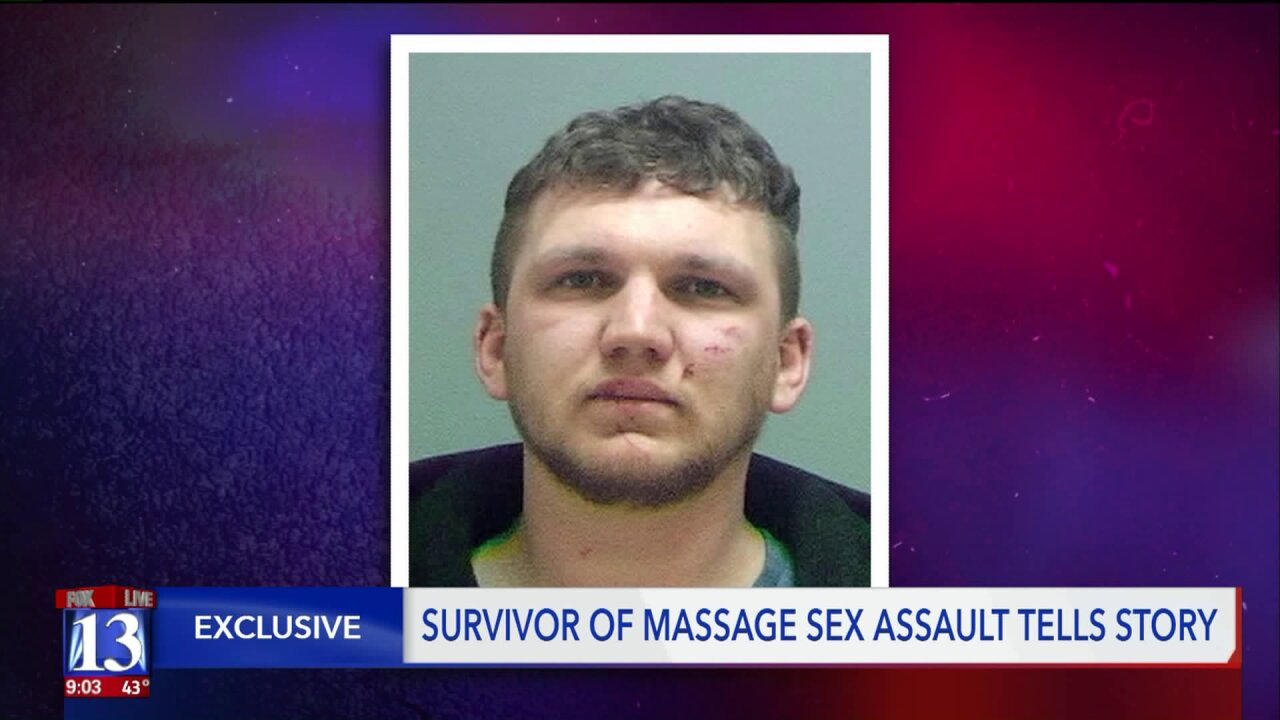 SOUTH JORDAN, Utah — A Utah woman is sharing her story after she was touched inappropriately by a massage therapist at a South Jordan spa in 2017. Now, as her aggressor awaits jail time, she hopes her words will encourage other victims to speak up.

“Today is my day and my voice will finally be heard,” Courtney Smithson said, reading her victim’s statement as she sat outside of the Third District Court in West Jordan.

“The second I walked through those doors, was the same second that Brandon Blacka’s hands not only violated my body, but diminished my entire identity,” she continued.

This is just a glimpse of Smithson’s four-page victim’s statement. Words she said she has waited years to say aloud to her aggressor.

“It was powerful,” Smithson said describing the moments after she read the letter in court Thursday.

But, the thought of what happened to her on March 5, 2017, still lingered.

“It was 60 minutes in a massage room that he took away as 60 minutes… whereas it was three years of my life, and it’s still ongoing, that he’s affected me,” Smithson said. “I see him everywhere I go.”

Nearly three years ago, Smithson had booked a massage at Massage Green Spa in South Jordan.

“I was in a room with a man that was supposed to be trusting,” she said.

That’s when it happened.

“He violated his right and sexual assaulted me within that room,” she continued.

According to a probable cause statement, Smithson told police she had received several massages in the past, but never one from Blacka.

“C.S. stated that during the massage, after she flipped over onto her back, BLACKA began to fondle her,” the statement reads. “C.S. asked, ‘what are you doing?’ And told him to stop. BLACKA apologized and stated, ‘Sorry, I didn’t mean to perv you out.'”

“No one ever thinks it’s going to happen to them, that you kind of are in a paralyzed form,” Smithson said. “In that moment, you just kind of bottle up and clam up and you really don’t know what to do… you feel very vulnerable and you feel very victimized.”

According to court documents, Blacka denied any inappropriate touching had happened, but just over a year later, in April 2018, a second complaint was filed against Blacka, this time in Spanish Fork.

Following the second report, the State Attorney General’s Office filed a disciplinary action against his license. Blacka then agreed to surrender his license to practice as a massage therapist in Utah without any admission or denial of guilt.

“I hope it becomes apparent how much your hands have changed my life, how they have transformed my body and my soul into a blank space and giant question mark where someone with so much life used to be,” Smithson said as she continued to read from her victim’s statement.

After years of waiting, and a series of court dates and hearings — on September 19, Smithson’s nightmare came to an end.

“In the courtroom, having him hear what he’s put me through, it’s given me the ability to kind of push forward,” Smithson said.

Smithson’s voice is finally being heard.

“I will never forget what you did to me that day, ever, but I will forgive you today — not for you, but for myself, for the three years of suffering you’ve distinguished in my life. I need those words for me: I forgive you,” Smithson said as she read the end of her victim’s statement.

Now, she hopes her story will inspire others to come forward.

“It gives you that sense of relief and it makes you feel empowered. I know it makes me feel empowered as a woman. The past three years I have not felt that way,” Smithson said. “I think that’s the first step to healing… getting your story out there. And once it’s out there, I think the good things start to happen… it’s time for you to heal.”

Blacka pleaded guilty to charges for sexual battery, a Class A misdemeanor. He was sentenced to 14 days in jail, two years’ probation, 90 hours community service and to pay restitution. He is expected to be booked into jail Monday.