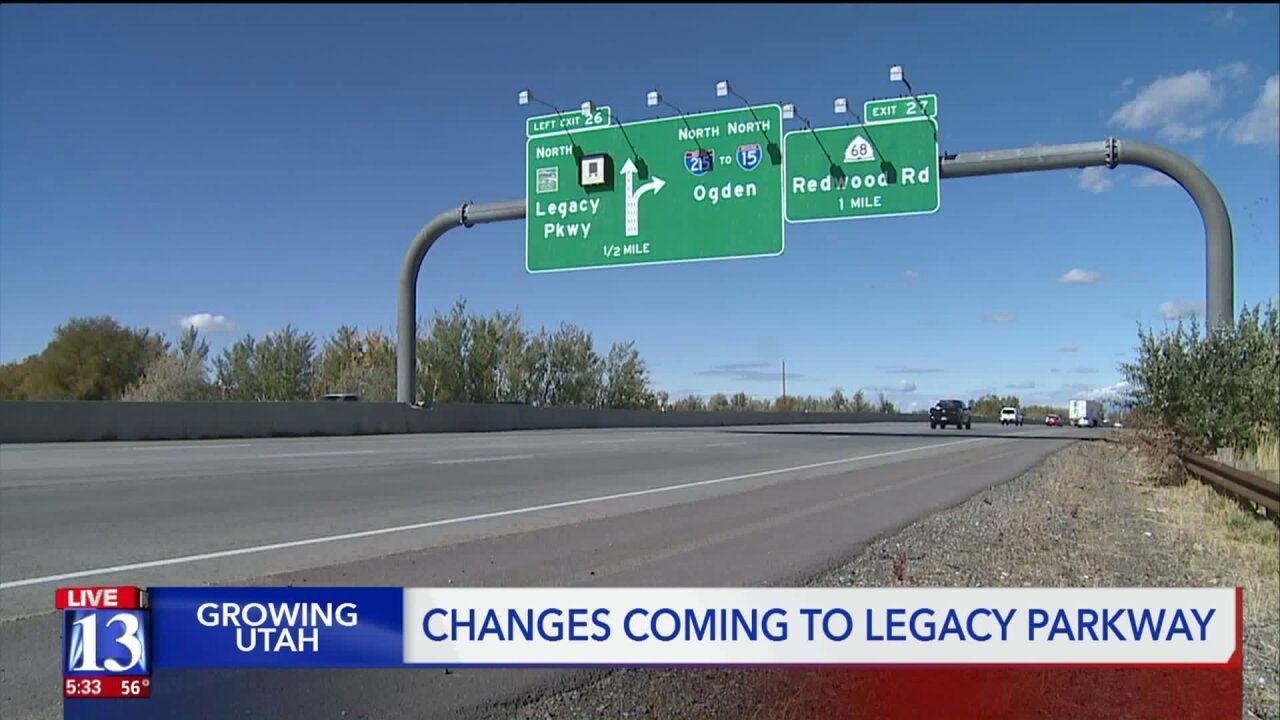 DAVIS COUNTY, Utah — The Utah Department of Transportation has announced speed limits on Davis County's Legacy Parkway will increase to 65 mph beginning January 1, and large trucks will also be allowed to use the parkway.

The speed limit on the route was initially set at 55 mph and semitrailers with five or more axles (or 80,000 pounds or greater gross vehicle weight) were prohibited in accordance with an agreement signed in 2005. The agreement ended litigation that halted the construction of the 14-mile, four-lane roadway.

The settlement agreement expires on January 1, 2020.

State legislators attempted to pass bills that would extend the agreement, but their initiatives were voted down.

Angie Keeton, the founder of “Save Legacy Parkway” said organizations across the valley are now trying to negotiate with UDOT. Many homeowners do not want changes due to Legacy Parkway’s lack of collisions and lack of noise pollution.

“It’ll be like having a blender running in your house,” Keeton said. “The vibrations of heavy trucks can often do damage to structures nearby… I cannot understand why (UDOT) would take the taxpayer’s investment in this roadway and throw it away and simply turn it into another I-15. We don’t need another I-15.”

“We don’t really have the authority to ban trucks from any of our roads,” said John Gleason, a spokesperson for UDOT.

Keeton and other environmental groups disagree, citing the settlement signed in 2005.

“It says, ‘UDOT could consider the need’ to allow trucks and raise the speed limit,” Keeton said. “It also allows UDOT the option to continue the truck ban… If UDOT really wants to meet their goal of zero fatalities, they will consider keeping safe roadways safe.”

“The Agreement was a great thing because it allowed us to complete a roadway that has made a real difference in mobility in south Davis County,” UDOT Traffic and Safety Director Robert Miles told Transportation Commissioners. “But the Agreement had a sunset date: Jan. 1, 2020. The only way that sunset could be extended is through legislative action, and the legislature has chosen not to extend it. So the Agreement expires Jan. 1.”

UDOT speed studies indicate drivers are already averaging between 65 and 70 mph on Legacy Pkwy., despite the current 55 mph speed limit.

“Legacy Parkway was designed to accommodate speeds higher than 55 miles per hour, so it is safe and comfortable to drive at 65,” Miles said. “We decided to raise the speed limit to a speed that is closer to what drivers are actually driving. In doing so, we hope to eliminate the safety risk of speed discrepancy, which can happen when you have a significant difference between the speed most drivers are actually traveling and those who are driving the posted speed limit.”

Representatives with Save Legacy Parkway and Utahns for Better Transportation now say, without some sort of a compromise, things may revert to how they were in 2005 – with the threat of a lawsuit.