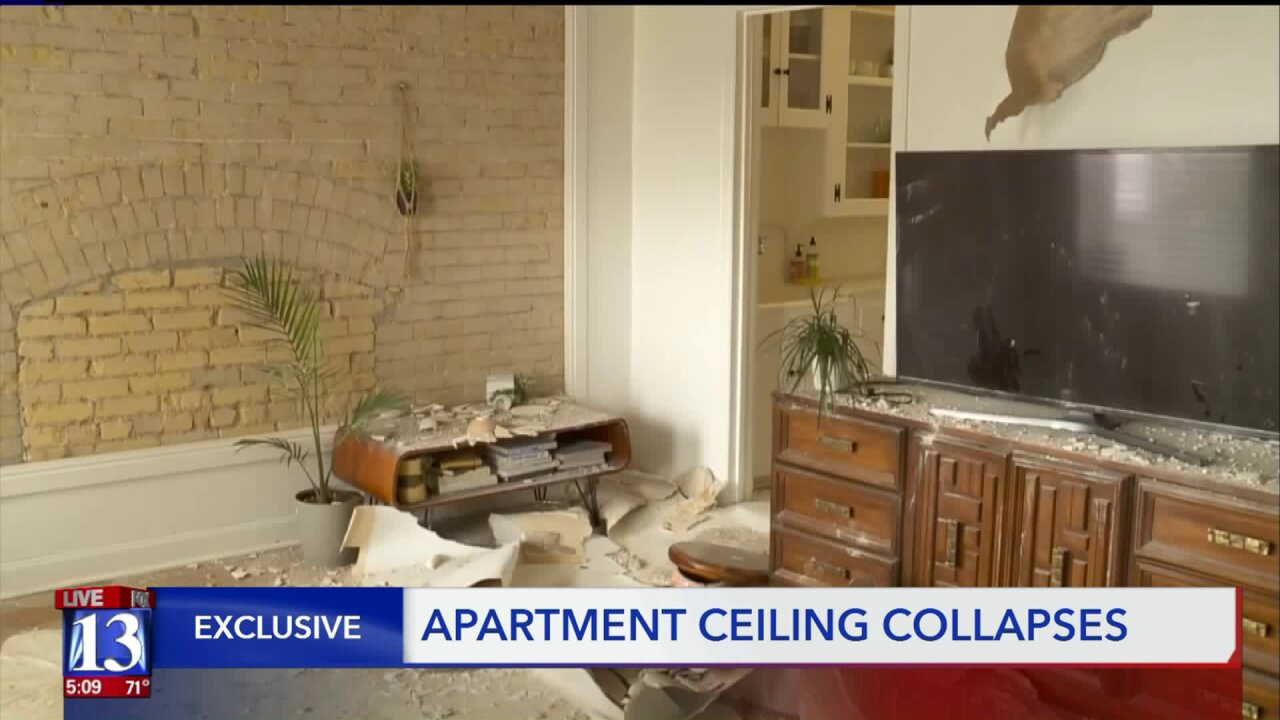 SALT LAKE CITY — A Salt Lake couple has been left without answers and displaced from their apartment after they say a number of their requests for maintenance weren’t taken seriously.

“It just makes you feel weird when you don’t have a home,” said Nina Pearson as she looked around her living room.

Right now Nina and Devin’s apartment looks more like a construction zone than a home.

Rubble and debris now coat their broken and shattered belongings and furniture, after their ceiling came crashing down Wednesday night — Nina was in the room when it happened.

“I started to hear it cracking and debris falling,” Nina said. “I grabbed my dog and ran, I screamed.”

“It just, ‘BOOM!’ sounded like an earthquake,” she continued. “The TV sparked, stuff went flying everywhere, my dog was freaking out.”

Of course their space at the Kensington Apartments in downtown Salt Lake City didn’t always look like this.

“On Sunday, I noticed a crack coming from both sides of the light fixture,” said Nina.

The crack above the lighting fixture.

So, she emailed management.

“My subject line on the email was, ‘Ceiling Caving In,’” she said.

But what started with a crack and bowed ceiling, quickly turned into destruction following unanswered requests for help.

“I had been sending photos since Sunday saying ‘Hey this is what it looks like,’ ‘Hey it’s getting worse,’ ‘Hey is someone coming in?’ And she never responded to me once… not one time,” Nina shook her head.

While Nina said she still never received a call or message back from building management, someone did show up at their door on Tuesday to ‘put a bandaid on it.’

“[The maintenance man] saw that it was an issue, he had the spackle in hand and he goes, ‘Yeah, I didn’t see this,’” said Devin Pearson, Nina’s husband. “I was telling him it’s not just something he could do cosmetically, like you can see it’s bowing in, it’s caving in and we need to get somebody out here, a restoration company — someone immediately.”

“Why isn’t there anything happening from it?” Devin said of the conversation.

Devin and Nina said the man that was sent with the spackle told them he would tell his boss who typically handles the maintenance requests.

“He said his helper [the man sent with spackle] had mentioned there’s a crack in 51, and that was it,” Nina said.

Come Wednesday, things continued to escalate. Noticing how large the crack had become and how bowed the ceiling was, Nina called the emergency maintenance line.

But it was already too late. While they were on the phone, Nina said she could hear a cracking sound and debris started to fall, that’s when it collapsed.

The couple's living room after the roof collapsed.

“It was terrifying, I was shaking for like two hours,” said Nina.

The Pearson’s believe it’s a reality, they should never have had experienced.

“Furious! If they would have come in three days ago this whole debacle wouldn’t have happened,” Nina said. “Now it’s a big issue.”

The couple said they have had issues with management responding to maintenance requests in the past.

“[The maintenance manager] just told me he has a list of items in apartments that he needs to fix and he just hasn’t been able to get to it,” Devin said. “So, I think we’re running into a situation where it’s, ‘rent out a bunch of places, but we’re not putting any effort into the actual aspect of what it is.’”

Now, nearly 24 hours later, nothing has been done to clean it up or fix it.

“The most disappointing part was their response, which has been basically nothing,” said Nina. “No one asked if we’re okay, or where we’re living, they just said, ‘Have you filed an insurance claim yet?’ And that was it.”

With lead-based paint on the debris and the other half of the ceiling barely hanging up, Nina and Devin said their apartment is now uninhabitable.

“We’re all in here right now and we’re all standing away from this because we’re scared, that could fall right now — if i touched it, it would probably just collapse… and that’s the reality,” said Devin as he pointed to the dropped drywall on half of the ceiling. “It’s not okay that that’s the situation and that’s how they’re approaching it.”

Maintenance did drop something off at Nina and Devin’s front door, a trashcan and two brooms.

“Just care, you know? That’s literally the biggest focus we need to start doing as people, and that’s not what’s happening today, they’re just like ‘meh, whatever,’” said Devin.

Nina and Devin are currently paying out-of-pocket to stay at a hotel in Salt Lake City.

Fox 13 reached out to Kensington Apartments multiple times Thursday, they did not respond to our requests either.