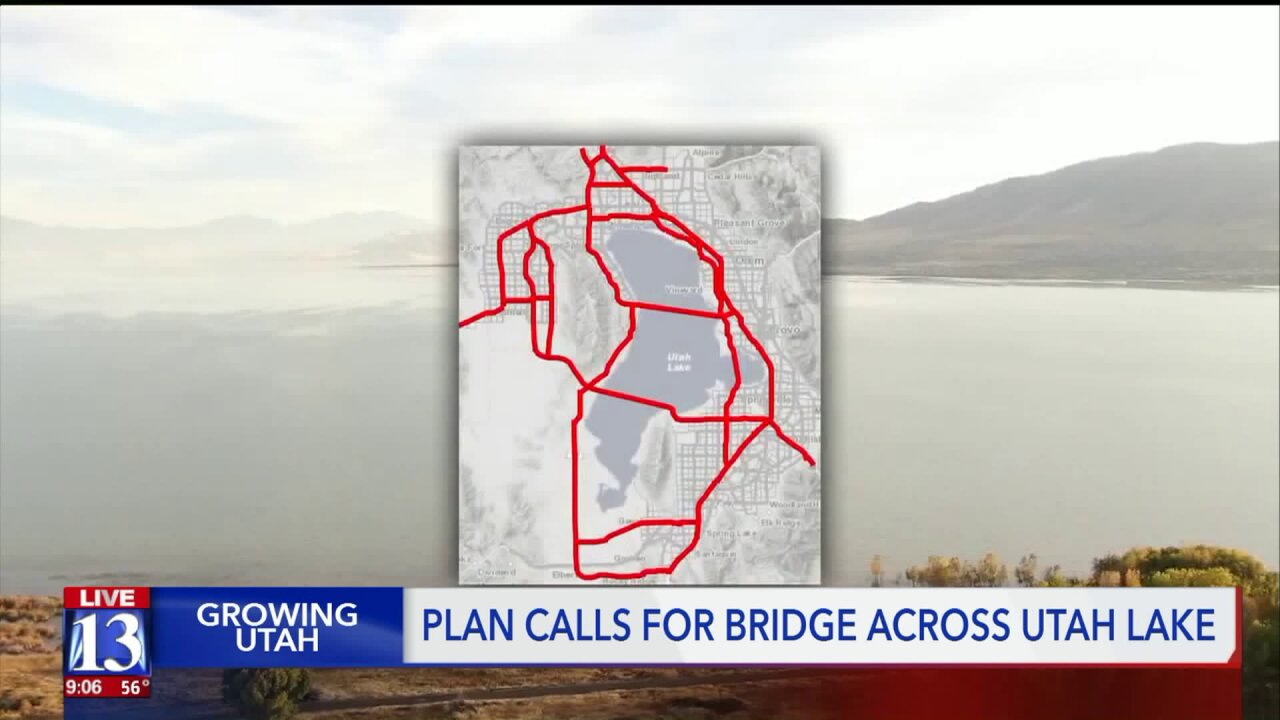 UTAH COUNTY —An updated transportation plan calls for some huge proposals for Utah County roads and transportation systems over the next few decades-- including a major project on Utah Lake.

TransPlan50 is a projected regional transportation plan through the year 2050, to keep up with the exploding growth in cities like Eagle Mountain, Saratoga Springs, Vineyard, Payson and Lehi.

Right now, drivers who live in Utah County will tell you it's not a quick commute driving to and from work.

He said it can take an hour to an hour and a half driving home from Salt Lake City. Sometimes he commutes home from American Fork, less than 10 miles away, and it takes a solid 30 minutes.

The only main ways to get in and out of Saratoga Springs and Eagle Mountain are through Redwood Road or Pioneer Crossing.
"I'm tired of sitting in traffic all the time," Shannon Dreyer said. "It's just, that's what you do."

Dreyer, who lives in Lehi but often drives out to Saratoga Springs or up to Salt Lake City explained how the areas have grown in just the four years she's been living there.

"The more people that come in, the worse it gets," she said. "We all moved out here because it was quiet. It's not anymore."

Recently, the Mountainland Association of Governments (MAG) released their TransPlan50, with an in-depth look at the future of transportation in Utah County.

It projects the Utah County population as skyrocketing from 600,000 people to 1.3 million by the year 2050. A graph predicts that some cities will grow by nearly 240 percent.

The plan maps out some possible transportation projects, including two bridges over Utah Lake.

The first bridge, according to TransPlan50, would be built by 2050 and connect Saratoga Springs to a community on the east side, like Vineyard. The second bridge further south on the lake is shown as a project to consider after 2050.

What are some initial thoughts from residents?

Dreyer said the bridge is needed, but wonders about the impact to the ecosystem and wetlands around the lake.

Burr said he thought it would help alleviate traffic on the southern end of Saratoga Springs, but doesn't help anyone heading north. They also had their own ideas to improve traffic.

"Adding parallel roads, so that not everyone has to come in and go in and out on Pioneer Crossing," Burr suggested.

TransPlan50 does call for strengthening major arterials between the west and east, as well as adding a north-south legacy highway to the west of and parallel to I-15 from Payson to Lehi.

It also shows that Pioneer Crossing could turn into a freeway.

Dreyer wants to see, "TRAX out here. Not just along the freeway, but bringing it out the east and west directions, too."

TransPlan50 lays out the possibility of a light rail system in Utah County, with potential east-west and north-south routes.

At a presentation to the Lehi City Council last week, a MAG representative said they finalized the plan during the summer, and are now visiting various city councils to talk about it.