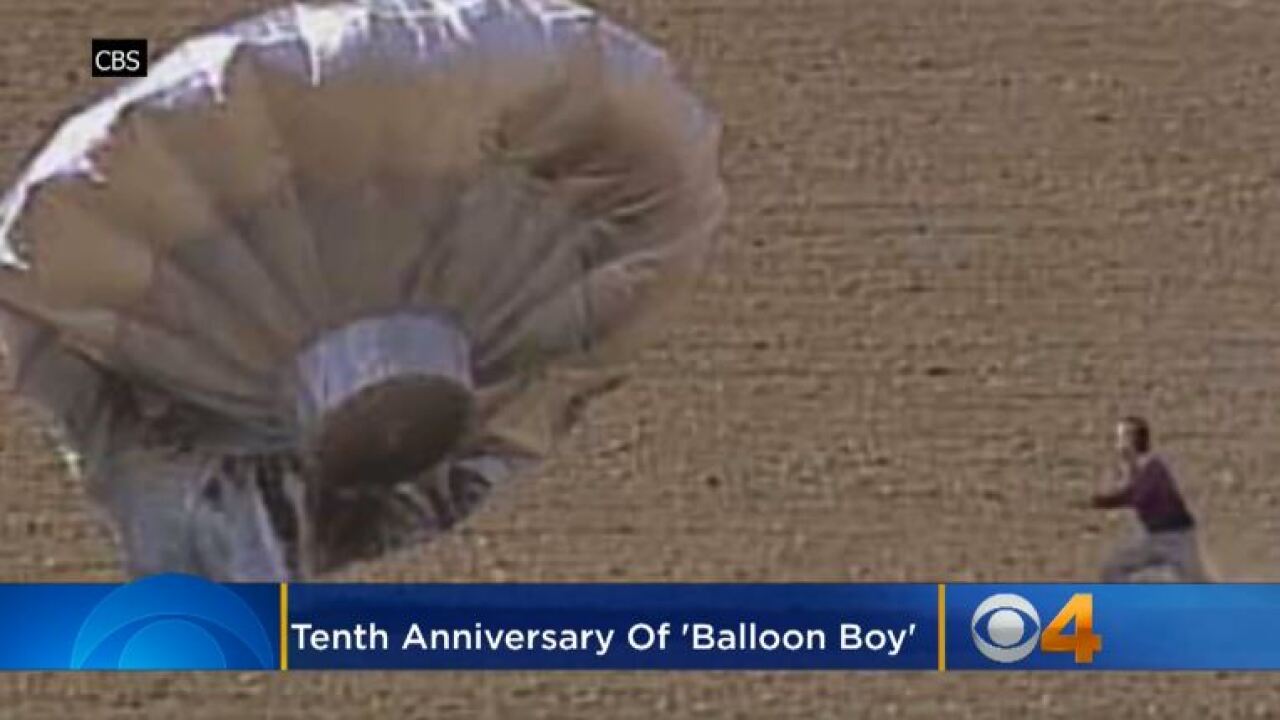 FORT COLLINS, Colo. (KMGH) — Ten years ago, the world watched as a homemade balloon soared across the Colorado skies. And inside was a 6-year-old boy, probably terrified and possibly injured.

Or so everybody thought.

This month, Robert Sanchez, a senior staff writer with 5280 Magazine, published an in-depth look at the viral “Balloon Boy” stunt after spending several days with the family accused of planning the hoax, though the parents still claim to this day it was not a stunt.

Sanchez visited the family, who had just moved to New York in May. The two parents of the Heene family, Richard and Mayumi, were there, as well as their three boys, 16-year-old Falcon, 18-year-old Ryo and 20-year-old Bradford, plus a dog.

The family was living in Fort Collins at the time of the incident, which happened on Oct. 15, 2009.

“That moment that there was this balloon in the air — it was just so absurd, but the interesting thing I thought was that it was this very unifying event,” Sanchez said. “People look at social media and TV as something that can tear people apart, but the “Balloon Boy” incident, at that moment when the balloon was in the air, when people thought 6-year-old Falcon Heene was in there — it was this unifying moment.”

The outpouring of empathy was beautiful, Sanchez said.

“People at one moment in our country’s history were all thinking about this one boy and this one family and really hoping things turned out well for them,” he said.

But behind the dramatic day was a detailed plan. Sanchez said the parents were trying to get a television show started, but nobody was expressing any interest. So, they hatched a plan: Richard would build a metallic craft-shaped balloon with his family’s help and they would take videos of the process. According to Sanchez’s 5280 story , the balloon was 20 feet wide and “was constructed using 16 pie-shaped plastic sheets and two rolls of duct tape. A circular plywood basket was attached to the bottom of the balloon with string, wood, and more duct tape.”

When it was completed, Falcon would pretend like he wanted to get in. Instead, as the empty balloon took flight, Falcon would go hide in the basement for half an hour. Richard, faking concern, would call the FAA and report the runaway balloon and tell authorities he thought his son was inside.

The plan was to wait a little while and then have Falcon appear from the basement. Everything would be filmed, and the Heene parents hoped their story would go viral. They wanted to gain attention for a science-based reality show that they had pitched to producers who filmed the couple’s appearance on ABC’s “Wife Swap” show in 2008, Sanchez wrote in the story.

But instead, Falcon hid in the attic of the home’s garage. And then he fell asleep. Various emergency personnel arrived at the home and followed the balloon for 50 miles as it whizzed through the air. The flight was broadcast across the country. It eventually landed in a farm field. When authorities reached it, there was no boy inside. Falcon was found soon after at the Heenes’ home.

“At some point I really believe Richard and Mayumi thought that Falcon had been taken by the balloon … because he was nowhere to be found,” Sanchez said. “And that’s why it appeared so real when they saw the reunification with the parents.”

The parents left their plan in the hands of a 6-year-old who didn’t follow it to the letter, he said.

Suspicions arose when Falcon looked up to his dad during a CNN interview and said, “You had said that we did this for the show.” Authorities, both locally and on the federal level, spent at least $62,000 pursuing the balloon and searching for the boy.

After an investigation and search of the Heene house, then-Larimer County undersheriff Ernie Hudson said, “There is absolutely no doubt in our mind that this was in fact a hoax.” Richard would go on to claim the Larimer County Sheriff’s Office lied during the investigation, which the office refuted.

In court, Richard denied the hoax (and still does), though he agreed to plead guilty to attempting to influence a public servant, which is a felony, to prevent Mayumi from being deported. Mayumi, who allegedly confessed the whole thing was a stunt, pleaded guilty to a misdemeanor charge of false reporting.

Richard served 90 days in prison starting on Jan. 11, 2010 and Mayumi served 20 days after his sentence ended. When Richard reported to jail, he choked back tears and said he was sorry, particularly to the rescue workers who chased down the balloon, fearing there may be a child inside, according to the AP.

“I think people felt betrayed because they really set their emotions out there for this family — for these people they didn’t know — and maybe that’s the lesson: You can’t believe what you see,” Sanchez said.

It became a silly story, but at the time, was very serious, he said.

Sanchez met with Lee Christian, Mayumi’s attorney, in Fort Collins and with his client’s approval, Christian showed Sanchez “at least 1,000 pages of investigative files, reports, and unreleased discovery,” Sanchez wrote. A series of notes, which were written by Mayumi, showed a detailed plan leading up to the incident. You can read the notes in the 5280 story here.

Now, despite what you may think of the parents, their children are “exceptional people,” Sanchez said. He described them as polite and hard-working during his visit to the family’s home in New York. The three boys are in a band called the Heene Boyz.

So, how is Falcon now? What sort of 16-year-old has he grown up to be?

He’s an outgoing teenager and full of life. He loves his parents, his brothers and his dog. And if you ask him about the whole incident, it doesn’t seem to fully register with him, Sanchez said. In his story, he wrote, “Falcon Heene isn’t ‘Balloon Boy.’ He’s Falcon Heene, regular teenager.”

“I think there’s some peace for him that his parents will never have,” he said.