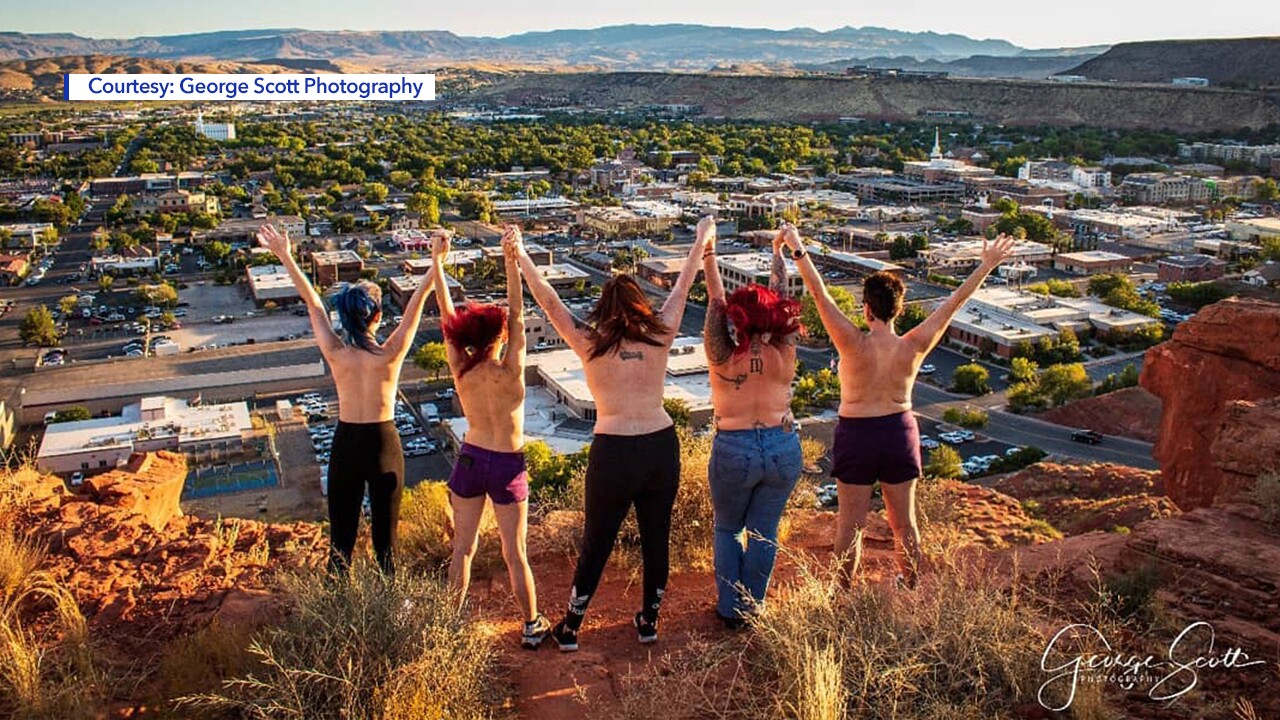 ST. GEORGE, Utah -- On a bluff overlooking this desert city, a group of women raised their arms and bared their breasts.

They were celebrating their newly-found freedom after the 10th U.S. Circuit Court struck down a Colorado city's anti-topless ordinance. Photographer George Scott had arranged a photoshoot to commemorate the court ruling.

"I don’t know if I'd quite go to political, but more so that than it was artistic," he said in a recent interview with FOX 13. "Just making the statement you’re free to do so."

The women are believed to be the first in Utah to take full advantage of the 10th Circuit Court ruling. Scott declined to identify them out of concerns they could still be subject to prosecution or even harassment. He described the photoshoot conducted last month as "comfortable," with the women volunteering to participate. Reaction to it has apparently been muted.

"There was an older couple down the trail and they kind of stopped for a minute and watched," Scott said, describing some passers-by as the women posed topless. "They rode their bikes along the trail."

The original case came out of Colorado where a group called "Free the Nipple" sued, alleging that Fort Collins' anti-topless ordinance discriminated against women. The 10th U.S. Circuit Court of Appeals agreed and Fort Collins dropped any future appeals.

The ruling's impact could affect Utah laws on lewdness and toplessness. It is being cited in the misdemeanor case against a Salt Lake City escort who is seeking to have the charges thrown out. A strip club may also mount a legal challenge. A West Valley City mother is also bringing her own legal challenge to a lewdness citation. A Utah lawmaker said she may run a bill to make Utah laws comply with the 10th Circuit ruling.

The Washington County Sheriff told FOX 13 last month his office would no longer enforce that particular provision of the law in light of the court ruling. St. George Police were taking a slightly different stance.

"It’s some re-wording that we’re not going to enforce," said Officer Tiffany Atkin. "Rather, we’re going to assess. This is a new ruling for us, we’re working our way through that."

Officer Atkin, who was aware of the photoshoot, said so far toplessness "hasn't been an issue for us." She said they would take it on a case-by-case basis in consultation with prosecutors.

"There’s no line. In police work, there’s a lot of different variance," she said. "A lot of gray."

Scott said he agreed with police's stance to largely not enforce anti-toplessness laws. He was planning to do some future shoots.

"It’s new," he said. "People just don’t really know how to react. I think over time, it’s not going to be a ton of people doing it."