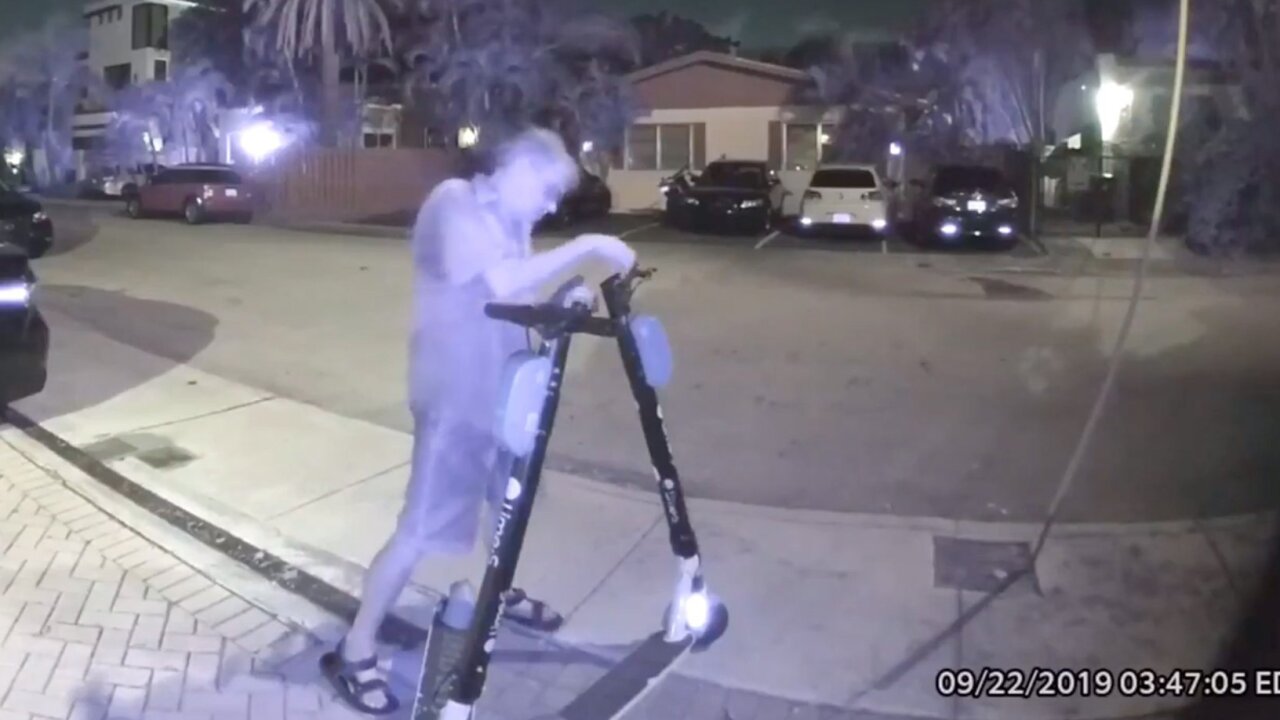 The Fort Lauderdale Police Department posted a surveillance video Tuesday showing 59-year-old Randall Williams walking up to an electrical scooter on the street, slapping a white sticker on its QR code, and cutting its brake lines, essentially rendering it impossible to use.

By Ryan Prior, CNN

A man in Florida has been sneaking around his neighborhood tampering with electric scooters parked on the streets, police say.

The Fort Lauderdale Police Department posted a surveillance video Tuesday showing 59-year-old Randall Williams walking up to an electrical scooter on the street, slapping a white sticker on its QR code, and cutting its brake lines, essentially rendering it impossible to use.

Police say that more than 140 scooters have been disabled and vandalized in a similar way in the southeast part of Fort Lauderdale since April 5.

Officers had already homed in on Williams as a possible suspect, and the majority of the acts of vandalism happened within two blocks of his apartment.

Caught in the act

Hoping to nab the saboteur, cops staked out the area over the weekend.

In the early hours of Saturday and Sunday morning, police say they saw Williams leave his apartment on his nightly rounds of scooter sabotage.

He “walked the neighborhood in a stealthy fashion, utilizing the shadows and the alleyways to conceal his movements,” according to their report.

Police say they saw him vandalize seven scooters on Saturday, and an additional nine on Sunday.

When they arrested Williams, he had with him two sets of wire cutters, a pair of handheld lock pliers, and he was wearing a glove, the police report says.

Police estimated the cost to fix each scooter at $70. For the total of 20 scooters to which they’ve linked him so far, the bill comes out to about $1,400.

A spokeswoman for the Fort Lauderdale Police told CNN that multiple brands of scooters were affected.

The cost estimate for the vandalism doesn’t take into account lost revenues from rentals while the scooters are inactive.

Williams did not return CNN calls for comment Tuesday.

According to the police report, Williams wanted to limit what he told authorities because he “didn’t want to dig himself into a grave.”

He was booked on charges of criminal mischief, resisting officers, and loitering or prowling. He was released Monday after posting $500 in bond, according to the Broward County Sheriff’s Office.

To help protect riders from jumping on a faulty scooter, a company operating the scooters, which authorities didn’t name, deactivated all its scooters in the neighborhood, the police report says.

Spokespeople for Lime and Bird told CNN that they’re grateful to the Ft. Lauderdale Police Department for taking action.

Lime said that they’ll seek “appropriate legal action against those that damage or vandalize our property.”

“We we have zero tolerance for vandalism and aggressively address it when it occurs,” a Bird spokeswoman said.