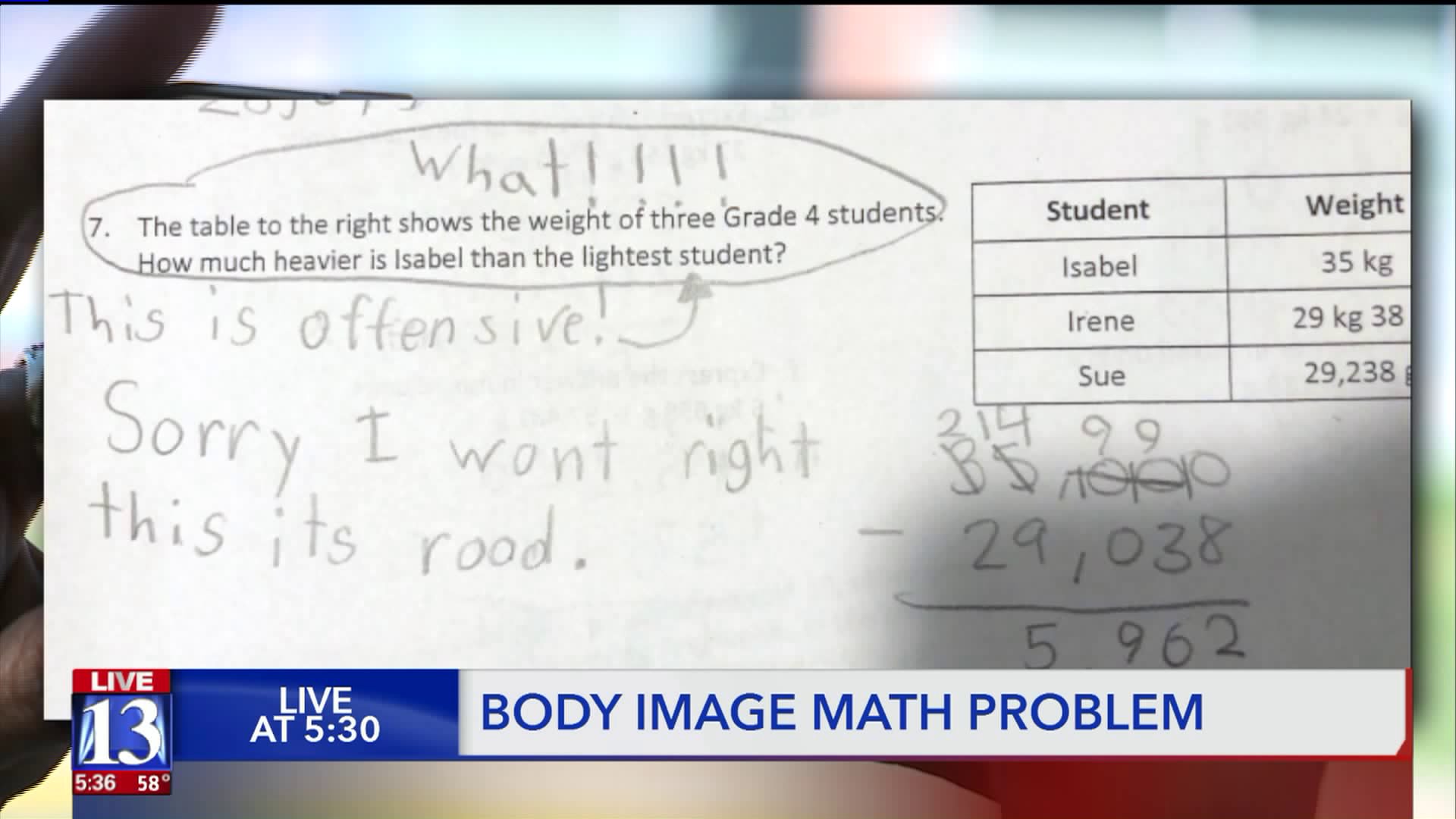 A Salt Lake County 4th grader is speaking up, claiming a math problem in her homework shed light on a bigger problem: young girls` body image. 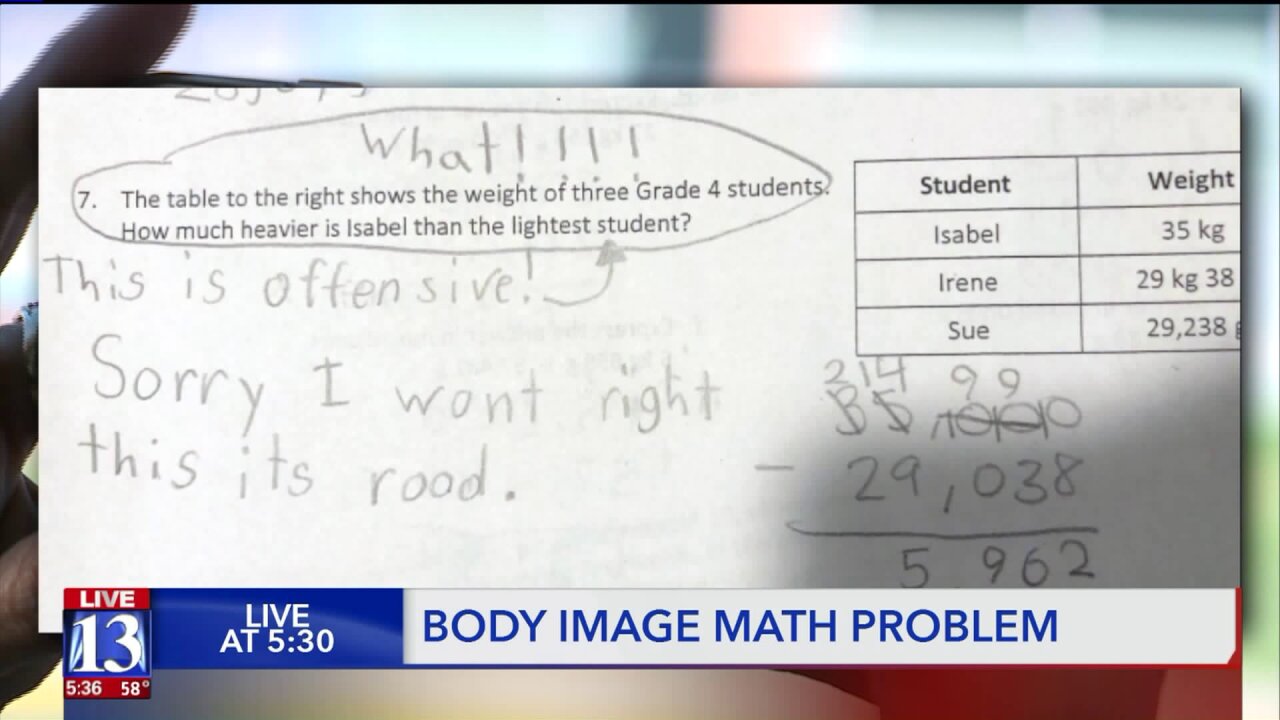 UPDATE: Eureka Math reached out to Fox 13 again on Thursday with a statement (below), in addition to an apology to any offended parties, the company has decided to remove the question from their curriculum.

"User feedback is a vital part of our culture; we are grateful to receive constructive feedback from students, teachers, and parents alike.  We apologize for any discomfort of offense caused by the question.  Please know that we will replace this question in all future reprints, and suggest that teachers supply students with an appropriate replacement question in the interim." - Eureka Math

The original story appears below:

“I was shocked… I was shocked, honestly,” said Naomi Pacheco as she stood in front of her daughter’s elementary school.

It was the last thing Naomi expected to see on her 4th-grader’s homework.

“I feel like it’s such an irresponsible way to teach children how to do math,” Naomi said.

“The problems right before that talked about watermelons, and then the problem before that, a Saint Bernard,” said Melissa Hamilton, the Murray City School District Director of Elementary Teaching and Learning. “So, 4th-grade student, 4th-grade problem.”

But the questionable equation wasn’t comparing apples and oranges.

“It says, ‘The table to the right shows the weight of three Grade 4 students. How much heavier is Isabell than the lightest student?” Naomi read the question aloud from a picture she had taken on her phone.

Naomi’s 9-year-old daughter, Rhythm, wasn’t okay with what she saw.

“I thought it was offensive,” said Rhythm. “I didn’t like that because girls shouldn’t be comparing each other. I know it was a math problem… but I don’t think that was really okay.”

Rhythm chose not to answer the question.

“She circled [the question] and wrote, ‘What! This is offensive! Sorry I won’t write this it’s rude!’” Naomi said as she continued to read from the photo.

Rhythm said she was concerned she would get in trouble, ‘because we get graded on this.’ So, she decided to write her teacher a letter in addition to the short message she wrote next to the question on her math worksheet.

“I don’t want to be rude, but I think that math problem wasn’t very nice, I thought that was judging people’s weight. Also, the reason I didn’t write a sentence is because I just didn’t think that was nice,” Rhythm read from the letter which she since got back from her teacher.

“Her teacher was so responsive and spoke to her about it and supported her decision,” Naomi said. “This isn’t about the teacher, the school, or anything — we love our school and our community. What it’s about is children being taught this everywhere, that it’s okay to make direct comparisons with weight.”

“They’re trying to make questions relevant to a fourth grader’s life and lifestyle and things that they encounter,” Hamilton said.

The school district said this is the first year they have used Eureka Math as a provider for their students. The district said they were, and still are, eager to use the curriculum given its proven success rates in other states.

“I didn’t really think that would be on homework, I thought that would be fruits or vegetables or things like that,” said Rhythm.

“I can certainly see if a 4th-grade student did misconstrue that question. However, in math curriculum, [it] wasn’t about body image — the question was about moving kilograms to pounds,” Hamilton said.

Fox 13 reached out to Eureka Math, they said in the six years they’ve provided math modules; they’ve never had a complaint about this question.

“There is no value judgment in the question about weight, it’s merely a comparison," Eureka Math’s Director of Marketing Communications Chad Colby told Fox 13 in a phone conversation. "It sounds like the parent is putting the value judgment on it, not the question."

“I think we have other resources and other ways of teaching our children math and how to weigh proportions, objects, people, without direct comparisons — especially comparing little girls,” Naomi said.

“The fact that they [Eureka Math] are asking questions like this irresponsible,” Naomi continued. “If it is such a great way to teach, then I think we can look outside of the box and ask questions differently. There’s just no need for it.”

Colby said he did not believe there was any reason for the company to address the question or have it removed.