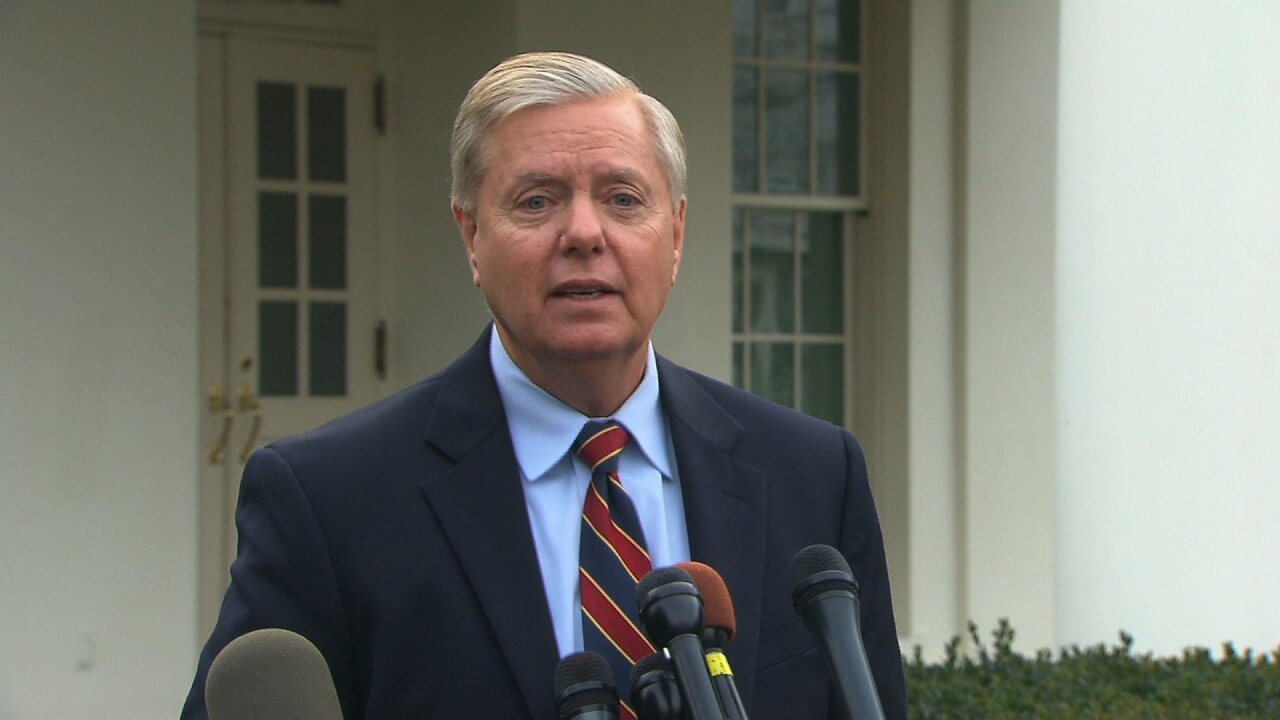 After having lunch with President Trump, Republican Sen. Lindsey Graham says the president now understands what is at stake in Syria and has agreed to slowing, for now, his plans to immediately withdraw all US troops from Syria.

Over the past four years, Lindsey Graham has gone from one of Donald Trump’s most vociferous critics to one of his most vociferous defenders, even as evidence mounted that the President had crossed policy and ethical lines the old Graham might not have tolerated.

Graham’s new approach may reflect the Republican senator’s evolving views of Trump and his presidency, which while controversial on many levels also counts numerous mainstream Republican wins, such as tax cuts and federal regulations and confirmation of scores of new judges, including two new Supreme Court justices who fill out the 5-4 conservative majority.

But Graham’s transformation also mirrors his need for the President’s endorsement as he runs for reelection to a fourth term in conservative South Carolina where the powerful Judiciary Committee chairman might not win again without Trump’s support.

It also is a sign that Graham wants to remain close to and influential to Trump, who he disagrees with on many foreign policy and national security issues, but still has regular audiences with him in the Oval Office.

Response to the whistleblower

In the wake of the latest Trump controversy — charges from a whistleblower that the President tried to strong-arm the new Ukrainian president to dig up dirt on Democratic presidential candidate Joe Biden, something that has triggered an impeachment inquiry in the Democratic-led House — Graham has gone on the offensive. He has repeatedly defended Trump’s actions and turned the blame to Biden for his dealings with Ukraine when he was vice president in the last administration and his son had business dealings there. There is no evidence of wrongdoing by either Joe or Hunter Biden.

“This seems to me like a political setup. It’s all hearsay,” Graham told CBS’ “Face the Nation” on Sunday. “You can’t get a parking ticket conviction based on hearsay. The whistleblower didn’t hear the phone call. Who told the whistleblower about the phone call and everything else? Donald Trump is still an American. Every American deserves to confront their accuser. So this is a sham as far as I’m concerned.”

Graham’s argument that the whistleblower was relying on hearsay was undercut Tuesday when Sen. Chuck Grassley, a Republican of Iowa and longtime advocate for whistleblowers, issued a statement saying, “uninformed speculation wielded by politicians or media commentators as a partisan weapon is counterproductive.”

“When it comes to whether someone qualifies as a whistleblower, the distinctions being drawn between first- and second-hand knowledge aren’t legal ones,” Grassley added. “It’s just not part of whistleblower protection law or any agency policy.”

In his CBS appearance, Graham also pointed to Trump’s common complaint that special counsel Robert Mueller’s Russia probe was a witch hunt by saying of the Ukrainian investigation, the “Salem witch trials have more due process than this.”

Those colorful and supportive comments may please the TV-watching Trump, who golfs regularly with Graham, including this past weekend, and are a far cry from Graham’s comments four years ago when he was running in the GOP presidential primary against Trump and called him “crazy” and a “jackass.”

At the time, Trump wasn’t so kind to Graham either, calling him a “nut job.”

“This guy Lindsey Graham, he’s one of the dumbest human beings I have ever seen,” Trump said at a rally in South Carolina. “He starts hitting me, saying vicious things, ends up with 0%. He left in disgrace.”

From McCain to Kavanaugh

Trump and Graham’s relationship was hobbled by Graham’s close friendship with the late Sen. John McCain, a bipartisan-minded Republican from Arizona, who despised Trump and whom Trump despised in return. The President kept up his attacks on McCain posthumously, something Graham decried as “disturbing.”

Graham may have won Trump back by his spirited and effective defense last year of Brett Kavanaugh when the now-Associate Supreme Court Justice’s confirmation to the court was endangered by allegations of sexual assault when he was in high school. Kavanaugh denied the allegations against him.

Despite their growing bond, Graham, a defense hawk, is critical of Trump’s handling of Iran, Saudi Arabia, Afghanistan, and other areas of tension around the world. Graham worries the war-wary Trump is unwilling to use military might to enforce US goals around the globe.

For example, after Iran allegedly shot down a US military drone, Trump and Graham clashed on Twitter after Trump didn’t strike Iran militarily.

“The measured response by President @realDonaldTrump regarding the shooting down of an American drone was clearly seen by the Iranian regime as a sign of weakness,” Graham tweeted.

“No Lindsey, it was a sign of strength that some people just don’t understand!” Trump replied.

While Graham can’t always persuade Trump to act the way he wants militarily and diplomatically, his now reliable political support for Trump — through the many scandals and mini-scandals that unfold weekly — allows Graham to be at the President’s side as Trump is weighing key decisions.

He’s one of the few Republicans on Capitol Hill with that kind of regular access to Trump, which may help explain why Graham, who appears headed to reelection, picks his battles with the President carefully.