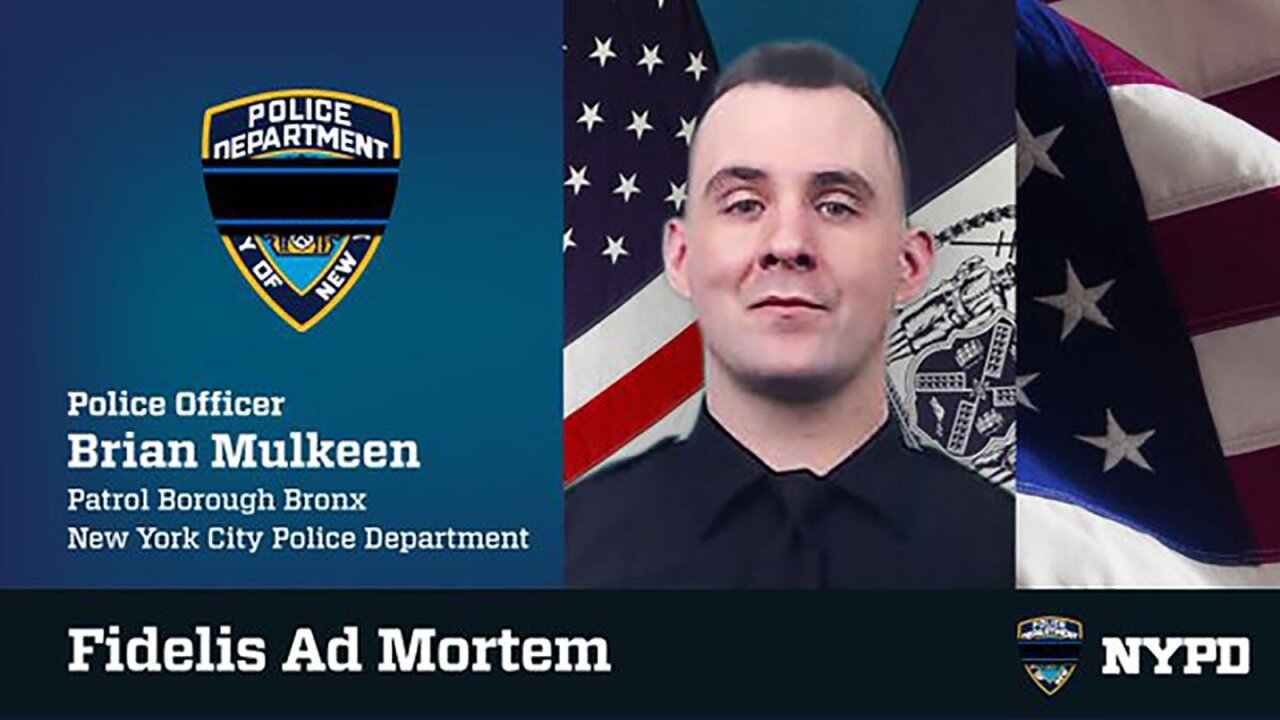 Police say the fatal shooting of a New York Police Department officer was the result of friendly fire. Source: NYPD

Police say the fatal shooting of a New York Police Department officer was the result of friendly fire.

“This is a tragic case of friendly fire, but make no mistake, we lost a life of a courageous public servant solely due to a violent criminal who put the lives of the police and all the people we serve in jeopardy,” New York Police Department Commissioner James O’Neill said Monday.

Brian Mulkeen, a 33-year-old member of The Bronx Anti-Crime Unit, was investigating gang activity, including recent shootings with two other officers at about 12:30 a.m. Sunday, NYPD said.

The officers got out of their vehicle to question a man, who then fled, and the officers gave chase. As the officers tried to apprehend the suspect, a violent struggle on the ground began, NYPD Chief of Department Terence Monahan previously announced.

Mulkeen fired five rounds and his partners fired 10 rounds, two of which struck Mulkeen, O’Neill said. Police previously said Mulkeen was hit three times, but O’Neill said one of the wounds was “an in and out wound.”

“Officer Mulkeen retained his firearm during the entire violent struggle he had with the suspect,” O’Neill said. “Brian was the one who fired his own weapon, and he fired five rounds at the suspect.”

The 27-year-old suspect, Antonio Williams, was shot and killed. He was on probation for a narcotics-related arrest and had served time in prison on a burglary conviction, Sgt. Mary Frances O’Donnell of the NYPD said. He also had been arrested for petty larceny and false documents, she said.

O’Neill said Williams’ loaded gun was not fired during the incident.

Though body-cam video was available, Mulkeen’s camera was not activated, O’Neill said.

Mulkeen had served on the NYPD for over six and a half years and lived in Yorktown Heights with his girlfriend, who is also an NYPD officer.

Mulkeen graduated from Fordham in 2008 and was a two-year field captain for the track and field team, competing in weight throw and hammer throw, the university said.

Mulkeen is the second NYPD officer to be shot and killed on the street this year. In February, an NYPD detective was fatally shot in a friendly fire incident as police responded to a reported robbery at a cell phone store in Queens.

As Det. Brian Simonsen, 42, and a sergeant went in to the store, a suspect came out of a back room with a replica handgun, the NYPD said. The two officers fired, and as they were leaving the store, Simonsen was apparently shot by uniformed officers. The sergeant was struck in the leg, police said.

In addition, nine NYPD officers have died by suicide this year, a cluster that has rattled the department.

Sunday’s killing comes more than a day after a gunman shot dead Texas Deputy Sandeep Dhaliwal, an observant Sikh who gained national attention years ago when he got permission to wear a turban as part of his Harris County Sheriff’s Office uniform.

Dhaliwal had stopped a man for a traffic violation and was walking back to his patrol car Friday afternoon when he was shot twice, including at least once in the back of the head, authorities said.