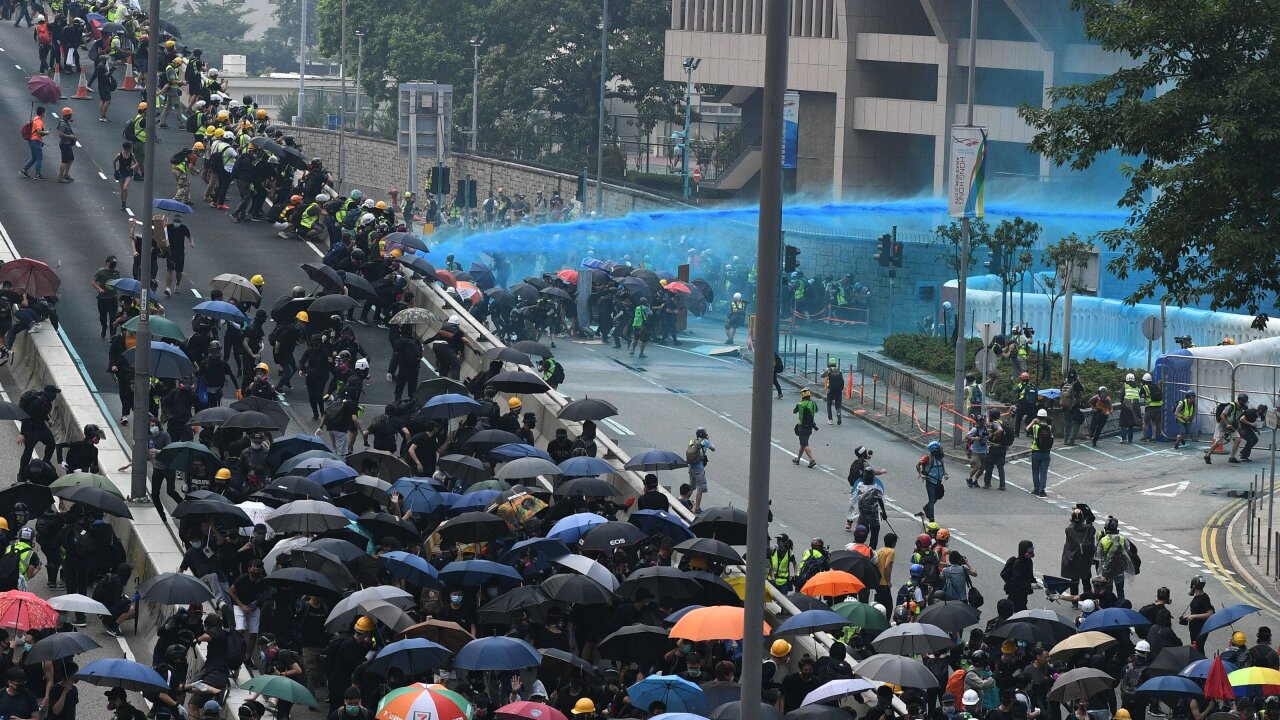 Hong Kong police fired blue dye from a water cannon and rounds of tear gas as protesters threw petrol bombs and bricks in clashes ahead of the 70th anniversary of the People’s Republic of China. Source: Mohd Rasfan/AFP/Getty Images

Hong Kong police fired blue dye from a water cannon and rounds of tear gas as protesters threw petrol bombs and bricks in clashes ahead of the 70th anniversary of the People’s Republic of China.

Despite organizers not requesting permission from authorities, thousands of protesters marched in Hong Kong’s usually busy shopping district on Sunday. It was the 17th consecutive weekend of unrest in an ongoing protest movement that has seen both large-scale peaceful marches and violent clashes with the police.

The violence came two days before October 1, when the People’s Republic of China will mark its 70th anniversary.

Although Sunday’s march drew thousands of peaceful protesters of all ages, it took an aggressive turn. Police and protesters clashed on Sunday afternoon, with protesters throwing bricks and petrol bombs and setting fires on the street.

Police fired tear gas and pepper spray at protesters. Police also used a water cannon equipped with blue dye — aimed at staining protesters to make them easier to identity later — to clear people from the area around the Legislative Complex, an area that has often been a target during the ongoing demonstrations.

On Saturday, protesters gathered to mark five years since the start of the pro-democracy Umbrella Movement that brought parts of the city to a standstill for 79 days.

But Saturday’s protests also ended in aggression, with protesters throwing bricks and petrol bombs at the government buildings, and police using water cannons on the activists.

On Tuesday, President Xi Jinping will oversee a special National Day military parade in Beijing, featuring about 15,000 personnel, more than 160 aircraft and 580 pieces of weaponry and equipment. Hong Kong’s leader Carrie Lam will head to Beijing on Monday to take part.

Back in Hong Kong, protesters are already gearing up for more demonstrations to coincide with National Day. Pressure will be on the Hong Kong authorities to ensure that the city’s unrest does not overshadow Beijing’s celebrations.

Besides the anti-government unrest in Hong Kong, Xi is also facing other challenges, including the ongoing US-China trade war.