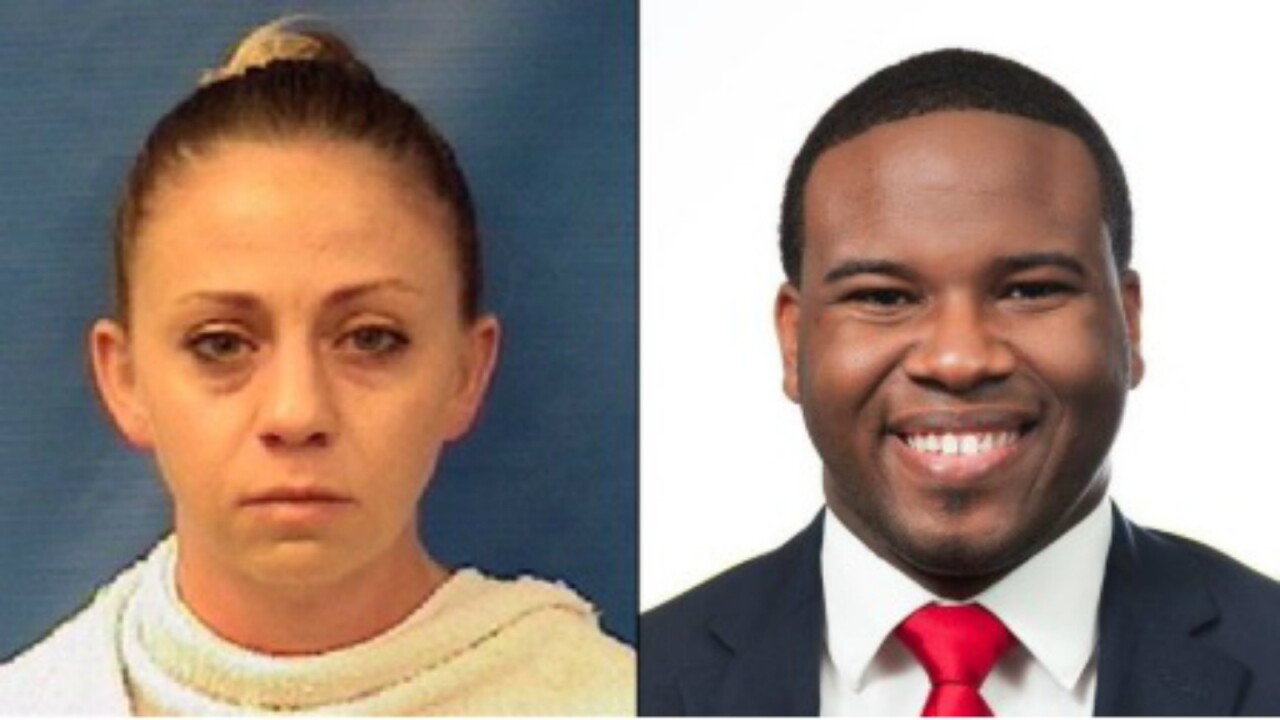 DALLAS – Amber Guyger, the ex-Dallas police officer charged with killing a 26-year-old man in his own apartment while she was off duty, broke down on the witness stand Friday, saying she believed she’d entered her own home and thought the man she encountered was going to kill her.

“I hate that I have to live with this every single day of my life,” Guyger cried as she testified in her own defense.

“I ask God for forgiveness, and I hate myself every single day … I wish he was the one with the gun who had killed me. I never wanted to take an innocent person’s life.”

Guyger, who’s charged with murder in the death of Botham Jean, struggled to maintain her composure most of the day. She even turned to the victim’s family in the back of the courtroom and sobbingly apologized for what she had done.

Jean’s family was largely stoic during a day of emotional testimony. Some occasionally shook theirs heads and whispered among each other and their lawyers.

Guyger’s sister and mother sat in court, each holding tissues in their hands, but rarely growing emotional as the former police officer testified that she was “scared to death” at discovering the apartment door “cracked open” and a silhouetted figure in the darkness inside.

The silhouetted figure moved toward her in a “fast-paced walk,” she said. She couldn’t see the person’s hands.

“Hey, hey, hey,” she said the person shouted, and she pulled the trigger.

Guyger had earlier been asked by one of her lawyers to describe the way she approached the door to what she thought last September was her apartment.

“I want to go through a few things that happened at that door with you now,” said one of her lawyers, Toby Shook.

Then, Guyger’s lips began to quiver as she broke down in tears while stepping down from the witness stand to demonstrate how she carried her police equipment in one hand and tried to open the door with the other.

The judge immediately called a recess, and the jury left the courtroom. If convicted, Guyger faces up to life in prison.

Guyger was trained in CPR but didn’t perform it on Jean, she testifies

Guyger also testified Friday about her childhood growing up in Arlington, her affair with her married police partner and her police training. She recounted wanting to become an officer at age 6.

“I wanted to help people, and that was the one career that I could help people,” she said.

Speaking about the day of the shooting, Guyger testified that she was tired on September 6, 2018, after a nearly 14-hour day and “just ready to go home” when she left work.

She said she was having an affair with another officer and had ended the relationship, even though the two shared intimate text messages. They were on the phone as she parked in the garage at home that night, she testified.

“I felt like it was morally wrong,” Guyger said about her relationship with Martin Rivera, the officer.

Later Friday, Dallas County prosecutor Jason Hermus, on cross examination, sought to poke holes in Guyger’s story, noting that she told responding officers that she believed it was her apartment but said nothing about Jean coming at her.

Guyger admitted under questioning by Hermus that she was trained in CPR but never performed it on the dying victim. She testified that her mind was racing, that she was on the phone with a 911 operator. She said it didn’t cross her mind that she had first aid supplies in her backpack.

Still, she found time to text her partner — directly after the shooting and even sending sexual messages days later, Hermus said.

“You made choices and decisions that suited you more than him,” the prosecutor said.

Hermus noted that witnesses who were across the hall during the episode testified that they didn’t hear her demand that Jean show his hands.

“Because you didn’t say that,” Hermus said.

Hermus asked why Guyger did not back away from the apartment and call for backup instead of confronting her perceived threat. He demonstrated that she didn’t conceal and cover as officers are trained to do when coming upon a burglar.

“That was the only option that went through my head,” she said.

Guyger was reminded that she took an 8-hour de-escalation training course five months before the shooting.

“What did you take from that class?” the prosecutor asked.

“I don’t remember,” she replied.

Hermus showed video of Guyger’s friends comforting her after the shooting and asked whether she could imagine what Jean felt in his final moments.

“That’s what hurts,” she said softly.

Jean was on the couch in his shorts, watching TV and eating vanilla ice cream, when Guyger walked in and fired, Hermus told jurors this week.

Guyger has told police she mistakenly walked into the wrong apartment and thought she saw a burglar. Guyger lived in Apartment 1378, one floor below Jean’s unit.

Guyger should have known she was in the wrong unit, prosecutors say

Guyger missed several signs indicating she was on the wrong floor and at the wrong apartment, prosecutors argued.

Several witnesses were questioned on the differences between Guyger’s and Jean’s apartments in an effort to demonstrate the former should have realized she was in the wrong unit before she opened fire.

For example, Dallas police Det. Stephen Cleary pointed out that Guyger’s apartment had a wooden board displaying photos hanging on the wall, a bookshelf in the corner and a small half-circle table with a vase of flowers against the wall.

The wall behind Guyger’s couch was bare, the photos showed.

But Jean’s apartment had art on the wall behind the couch, an ottoman and rug in the living room, and a workstation near the bar, Cleary testified.

The defense countered by pressing witnesses on the similarities in the hallways leading to their apartments.

This week, Texas Ranger David Armstrong testified that of the nearly 300 residents that investigators interviewed at the complex, nearly a quarter of those who lived in the third and fourth floors had previously put their keys in the wrong door. Even more had parked on the wrong floor and walked to the wrong apartment.

She should have focused on saving Jean but texted her partner, prosecutors say

Prosecutors also tried to show Guyger did not follow department burglar protocol for a burglary call. Guyger should have taken cover and called for backup, per protocol, at least one of her fellow officers testified.

But the defense argued since Guyger was off-duty and thought she was walking into her own home, she should not be held to that standard.

She was fatigued after working 40 hours in four days and was on “autopilot” when she parked on the wrong floor in the garage where the floors are not clearly marked, defense attorney Robert Rogers said in opening statements Monday.

As Guyger entered the apartment, she looked up and believed she saw an intruder about 30 feet from her in the dark, Rogers said.

The locking mechanism on Jean’s door was damaged, Armstrong testified, affecting the door’s ability to shut properly at times. Guyger’s defense team said that was one of the reasons she thought someone was burglarizing her home.

But after the shooting, Guyger was derelict in her efforts to save Jean after shooting him, prosecutors said, pointing to a 911 call she made shortly before 10 p.m. in which she said 19 times she was in the wrong apartment.

“When you listen critically to what she is saying, you are going to hear that she is as concerned or more concerned about how this is going to affect her than this poor guy on the floor next to her,” Hermus said.

Guyger sent two text messages to her partner on the force, whom prosecutors said she was intimate with — one at 10:02 p.m. saying, “I need you … hurry,” and another a minute later saying, “I f***ed up,” according to the testimony.

Authorities recovered those text messages, but Guyger allegedly deleted other messages, Hermus said. Guyger should have devoted all of her attention to providing first aid to Jean, Hermus said, instead of texting her partner.