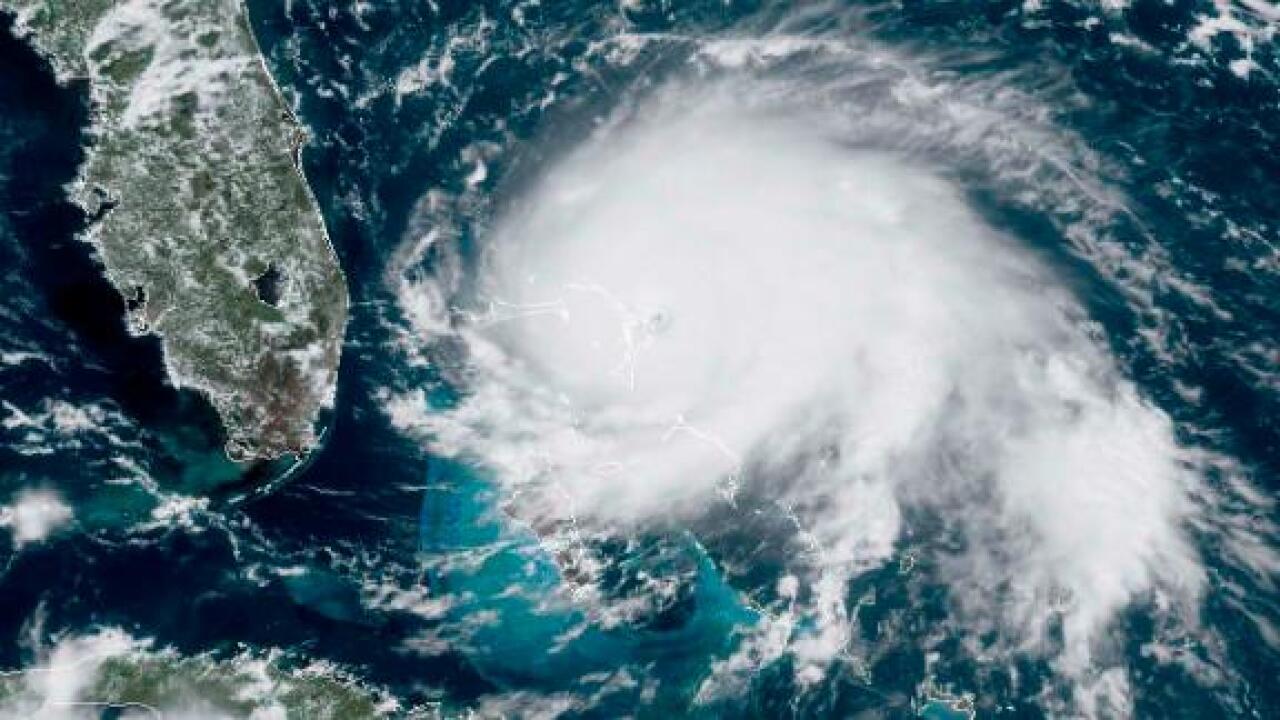 This GOES-16 satellite image taken Sunday, Sept. 1, 2019, at 17:00 UTC and provided by National Oceanic and Atmospheric Administration (NOAA), shows Hurricane Dorian, right, churning over the Atlantic Ocean. Hurricane Dorian struck the northern Bahamas on Sunday as a catastrophic Category 5 storm, its 185 mph winds ripping off roofs and tearing down power lines as hundreds hunkered in schools, churches and other shelters. (NOAA via AP)

Harry Brock saw the devastation that Hurricane Dorian brought to the Bahamas but says he will ride out the storm in his Port St. Lucie home.

Even after seeing what Hurricane Andrew did to Florida in 1992, he still feels he is as ready as he can be.

“I’m prepared for this, I’ve got my children taken care of … we’re ready for this,” Brock told CNN as winds began to whip his neighborhood. “Everything’s pulled in the garage, we’ve got our storm shutters up, my daughter’s got hers up, my son’s got his up.”

Brock is one of millions of residents in Florida, Georgia, and South Carolina who are or will be under mandatory evacuation orders ahead of Hurricane Dorian.

All of them face a wrenching decision: to flee the approaching storm or face potential danger by hunkering down at home.

And as Hurricane Dorian creeps westward in an unpredictable path, with coastal residents monitoring every minor change in direction, that decision is becoming harder and harder.

As Monday dawned in the Bahamas, revealing “catastrophic” hurricane damage, the potential consequences of their choice became starker.

“All we can do is pray for our coastline and the state of Florida and the Carolinas and the Georgias,” Brock told CNN. “It just tore my heart up to see what’s happening (in the Bahamas).”

Brock is not alone in deciding to ride out the storm in Port St. Lucie, where Dorian may strike Tuesday unless it veers north. Like much of Florida’s Atlantic coast, the city of about 170,000 people is under a hurricane warning.

Samir Aarass, a fellow Port St. Lucie resident, says he has no choice.

“I don’t have anywhere else to go so I’m going to stay here. I have my house in Port St Lucie, so I don’t want to lose it,” he told CNN. “Boarded it up. Cat, family, everyone’s okay. So I’m just going to stick it out.”

For many, it’s a difficult choice

To stay or go? It’s a choice many coastal residents in the Southeast US will have to make in the coming hours.

“If you are ordered to evacuate, you need to do that,” Florida Gov. Ron DeSantis told residents Monday morning. “From Palm Beach County all the way up to … the Florida-Georgia border, all those coastal counties have issued evacuation orders. And its important that residents heed those calls,” he said.

“Get out now while you have time, while there’s fuel available and you’ll be safe on the roads.”

Jack and Violet Honey were sitting outside their mobile home in Port St. Lucie on Monday, waiting for the storm to make a move before they decide what to do.

“If the storm comes closer, we’re leaving,” Jack Honey told CNN. “If it turns and goes north, we’re going to stick it out.”

The couple is under a mandatory evacuation.

Violet Honey said she has a gut feeling things will be fine but leaves the evacuation decision to her husband. He said their car is packed and ready to go at a moment’s notice.

If need be, the couple plans to drive southwest, where Jack Honey thinks the storm won’t have a major impact.

In Vero Beach, about 30 miles north, a mandatory evacuation is also in place. But that hasn’t stopped crowds from coming to the beach to gawk at the ocean.

CNN has witnessed police reminding residents that they have been ordered to leave. But many people say they believe the storm will veer away and they plan to head inland if Dorian gets closer.

Experts say some residents don’t want the hassle of loading their car and evacuating, while others may have a false sense of security or not realize they live in an evacuation zone.

Indian River County Major Eric Flowers said authorities are concerned about residents who refuse to evacuate. If those people encounter an emergency, first responders will not be able to help them if the storm gets too strong, he said.

The Jacksonville resident told CNN she is going to a shelter at the Landmark Middle School, where she will ride out the storm. It will be her third year in a row doing so.

While she has never had any damage to her home from storms, Williams said she does not want to risk her life.

In many of these counties the evacuations specifically mention those living in low-lying areas, RV parks and mobile homes.

At least two coastal hospitals in the state have decided to evacuate their patients to sister hospitals further inland.

“I would like to ask everyone to heed those warnings, especially those that are on our barrier islands. You may be on your own if first responders are unavailable to get to you,” Kemp said.

“We have the ability with first responders to move trees out of roads and cut trees up and clear roadways … but it’s a whole different story if we have flooding on causeways and we cannot get vehicle traffic to you in a time of need. Please do not take this risk. If you’re able to evacuate, please do so.”