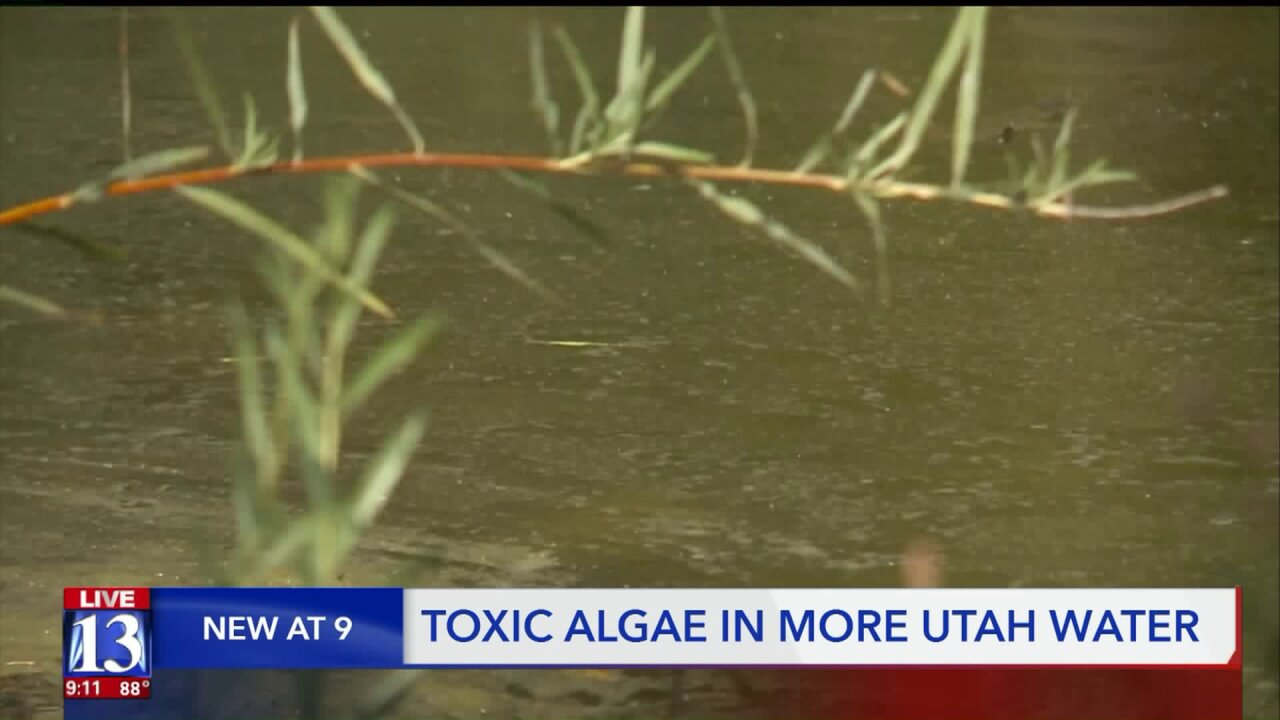 For residents in Taylorsville, Millrace Park Pond is somewhat of a hidden gem for fishing.

“There’s lots of tiny fish, but we haven’t seen any big ones,” said Laicize Mortensen with a smile.

On any given sunny day, you’ll find families, friends and pet owners, tucked away by the water to do a little fishing.

“He usually just drinks the water, he’ll walk in it a little bit,” she said.

But since mid-August, this local gem, hasn’t been looking so shiny.

“It’s kind of greenish colored and foggy, seems to be a lot of algae,” Laicie said.

The dog days of summer, have made this fishing hole the perfect breeding ground for blue-green algae.

“Warmer temperatures or nutrients, which most people think about like fertilizers that’s fueling their growth,” explained Ben Holcomb, Environmental Program Manager for the Utah Department of Environmental Quality.

“We don’t have a magic pill to dump in there, we have to let nature play itself out,” Holcomb continued.

If you head to the Southern end of Millrace Park Pond, that’s where you’ll see it. high concentrations of blue-green algae, resembling a bright green paint spill sitting on top of the water, and this stuff, can be dangerous.

“Things like intestinal cramping, or headaches, or just feeling nauseous or getting rashes,” Holcomb said as he listed the impact on humans if they ingest or come into contact with the toxic algae and water.

For animals, it can be deadly.

“I’m probably not going to bring my dog here ever again, honestly,” Laicie said. “I can’t stop him when he’s doing it and it’s hot, it’s a hot summer day, so it’s just going to be his natural instinct to gravitate towards the water.”

According to the DEQ’s website, this is just one of eleven areas across the state with algal bloom warnings and advisories, including…

“We’ve been continually adding them throughout the summer,” said Holcomb.

“Historically, this is when we would start seeing most of them pop up,” Holcomb said. “We had such a late spring, so it’s kind of pushed things back.”

The warnings are very clearly listed on the DEQ website, which is updated almost everyday — however, you won’t find any notification warning residents of the harmful algal bloom at Millrace Park Pond.

“I think there should definitely be signs posted,” Laicie said. “There’s no indication of anything wrong.”

“A lot of us love our animals more than we even love ourselves, I know I do, so I would never do anything to put him at risk and it makes me sad that I didn’t know,” said Laicie.