We are facing a global emergency in the Amazon. Here’s what we can do 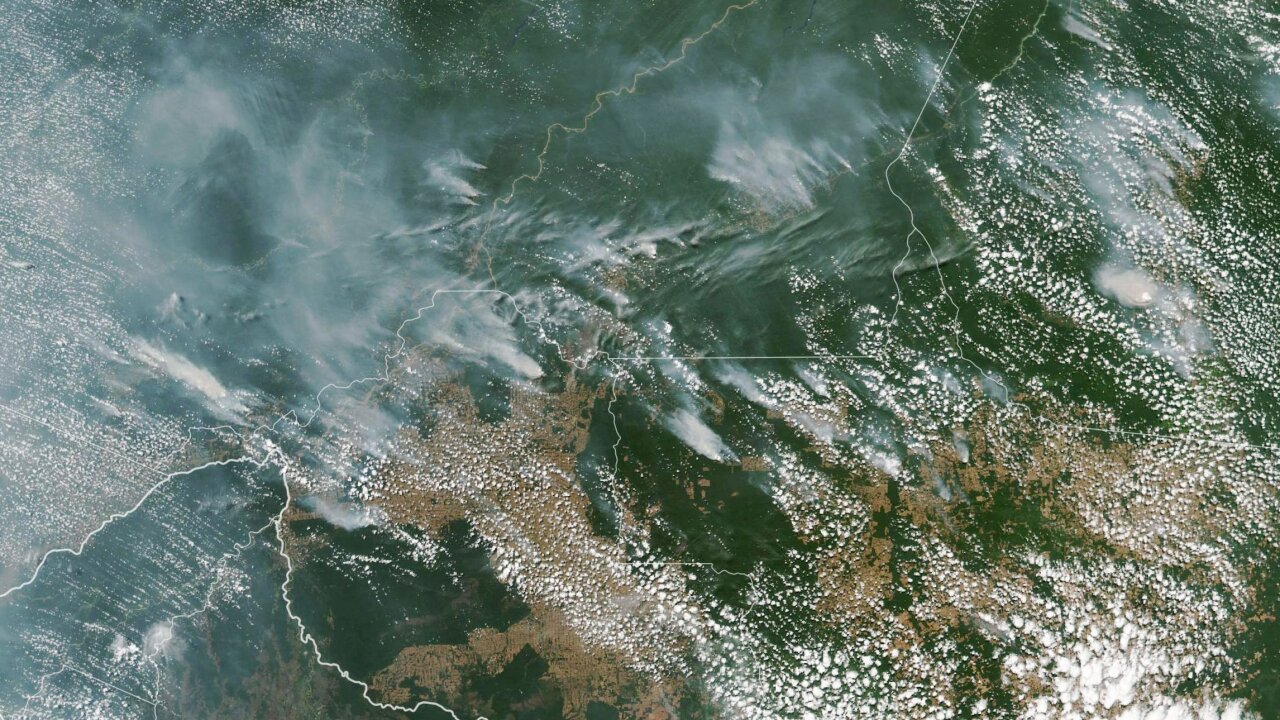 Fires are raging at a record rate in Brazil’s Amazon rainforest, and scientists warn it could strike a devastating blow to the fight against climate change. Source: NASA Handout/Shutterstock

Called “the lungs of the Earth”, the Amazon rainforest and its lush trees make roughly 20% of the oxygen on Earth. Yet, right now, the skies of Sao Paolo, Brazil are black and the smoke can be seen from space.

Flames are ravaging the Amazon Basin. Though climate change has catalyzed many devastating blazes in recent years, these recent fires, experts say, were intentionally set by farmers who, responding to calls from Brazilian President Jair Bolsonaro to develop the region, wanted to clear their land so it could be used for agriculture. As Bolsonaro put it, “the Amazon is open for business.”

But it’s on fire, and as it burns, the Amazon drastically contributes to the climate crisis —- both from the carbon released by the forest fires and from the loss of trees’ ability to absorb carbon in the future. A healthy Amazon is critical to the survival of not only the local and about 400 indigenous groups that call it home but to our entire planet.

The corporations and financial institutions that back the businesses Bolsonaro beckons drive this deforestation and destruction, and will generate tremendous short-term profits at the expense of the Amazon.

Now that the world is finally paying attention to the Amazon Basin, it’s important to also understand that governments and companies around the world are emboldening the Bolsonaro regime’s toxic policies when they enter into trade agreements with his government or invest in agribusiness companies operating in the Amazon.

Companies like BlackRock, the world’s largest investment firm, which announced plans to expand its operations in Brazil after Bolsonaro was elected, is a key financier of the agribusiness giants implicated in deforestation in the Brazilian Amazon, according to the non-profit organization Amazon Watch.

More money invested in these businesses means more forest clearing for industrial agriculture. Moves like this signal strong support for Bolsonaro, who has advocated for opening new areas of the Amazon rainforest to agriculture and industry, and whose rhetoric can fuel hate against indigenous people and others. Many of the oil, mining, and agribusiness operations in which BlackRock allegedly invests contribute to the violation of indigenous rights and furthers the expansion of development into the Amazon, according to Amazon Watch.

Responding to Amazon Watch’s accusations that it is contributing to the destruction of the rainforest, Blackrock told the Financial Times that “it makes investments on behalf of our clients, whose investment decisions we have a fiduciary duty to carry out. We do not own the assets our clients invest in. Our clients choose to invest in a wide range of assets and we endeavor to offer them a wide range of investment options, including sustainable investments.”

The indigenous people of the Amazon have been calling attention to the consequences of failing to protect the rainforest for years. They have also been resisting the destruction, sometimes paying with their lives.

Thanks to the latest report from the Intergovernmental Panel on Climate Change (IPCC), Western science has confirmed what indigenous people have long known: Strong and organized local communities are a key defense against industrial destruction. It is imperative that we support them in their fight to protect the biodiversity on their lands and slow the effect of climate change immediately.

Since Bolsonaro gained power, there has been rapid deforestation in the Brazilian Amazon. His anti-environmental position, which erroneously frames forest protections and human rights as impediments to Brazil’s economic growth, is fueling the fires. Illegally clearing land with fire is a horrible, corporate-driven practice that happens across the globe. Indonesia, for example, saw an estimated 2.6 million hectares of forest burn in 2015, and the resulting haze crisis caused an estimated 100,000 premature deaths. The daily global greenhouse gas emissions during the crisis exceeded that of the entire US economy.

It’s not hyperbole to say that the fate of a livable future is at stake and we must hold those betting against it to account. BlackRock must move its investments away from the industries destroying the vital Amazon rainforest and the homes of the indigenous communities that live there; shareholders and the public must push them to action. The other corporations doing business with or investing in the destruction of the Amazon must also actively clean up their supply chains or divest.

Global solidarity with Brazil’s indigenous and environmental movements can make the difference at this critical moment. Bolsonaro’s regime is sensitive to its image abroad and is increasingly reliant on international corporate and financial actors to rescue the nation’s ailing economy. Thus the international community has a unique and urgent opportunity to pressure the companies most responsible for today’s crisis. The acres of forest burning now are sadly lost, but these efforts can stop the rest of the Amazon from going up in smoke. This inferno is not a natural occurrence: the majority of forest fires were intentionally lit to further the business interests of a group of bad actors.

The Amazon is burning, the Arctic is burning, and the list of scorched lands seems to continuously grow: Alaska, Greenland, Siberia, across Europe, and again in Indonesia. We must take action, now.

Protecting tropical rainforests and upholding the rights of indigenous peoples are some of the most important ways to mitigate the effects of the growing climate crisis, but in order to stop it, we must hold the corporations, financiers, and governments driving this destruction accountable. Our house is on fire and indigenous people have been sounding the alarm —- are we ready to answer the call?