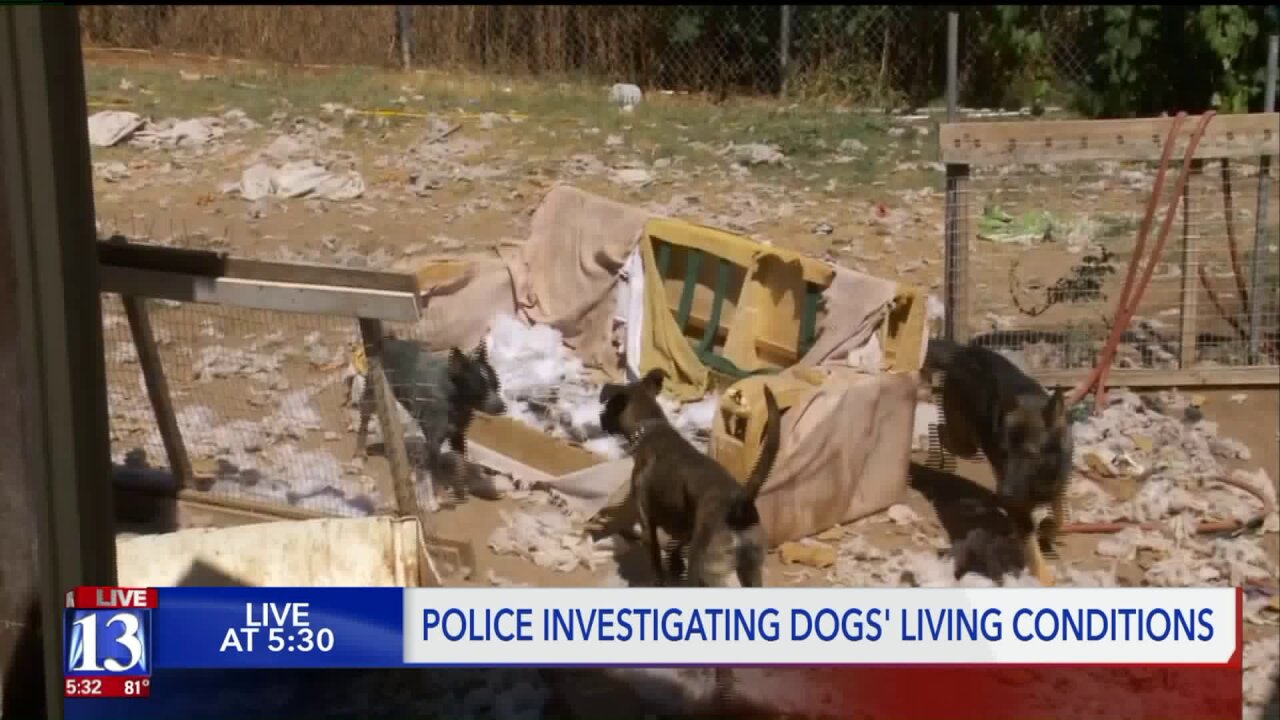 ROY, Utah — An 18-year-old woman is accused of mistreating “rescue” dogs to the point where puppies are being eaten alive, but she is disputing the accusations after a social media post went viral.

Roy Police Sgt. Matt Gwynn said the agency is aware of the situation, where more than a dozen dogs are part of Destiny Collins' unlicensed rescue located in a home near 4900 South and 2800 West.

Collins calls her four-year-old rescue organization "Animal Haven." Melisa Meloney said it is anything but that.

“Why has nothing been done sooner?" Meloney asked from her Layton home.

After Meloney’s dog “Midnight” failed a test to become a service dog, her 15-year-old daughter gave the border collie to Collins last week, thinking it was a legitimate rescue. In exchange, Meloney received another dog she planned to make a service dog.

That one, Meloney said, was skinny and sick. She has since returned it.

“If I had known, if my daughter had shown me anything like that, I would have been like, 'This is not where our dog is going. This is not what we wanted,'” Meloney said.

Lewis alerted Roy police after being inside the home in the spring.

“Upsetting, really upsetting just to walk in,” she said.

While inquiring about puppies for sale, Lewis said Collins admitted that at least three puppies were eaten alive by other dogs.

“She’s trying to make money off of breeding. She tries to tell people that she trains service dogs, but the service dogs that she’s training aren’t trained at all. They know basically no commands. They bite people,” Lewis said.

FOX13 was invited to view the back of the home Monday afternoon. A pack of dogs ran around a destroyed couch sitting on dirt. Inside springs were visible and filling spread out across the backyard. Dogs were barking and biting at one another as well as Collins. Piles of dog feces were also seen scattered across the property. While there was plenty of food, a water tub did not appear to be clean.

Lewis said the dogs are not fixed and are living in filth and disease. She shared photos of an online ad that was uploaded by Collins advertising the dogs for sale. The photos have since gone viral with thousands of shares and comments on Facebook.

Collins said she’s getting harassed online. People have even come to her home.

“I think that is (expletive) because I clean my house every single (expletive) day,” Collins said.

Collins said the accusations are lies. Instead, she said, her dogs are healthy, trained, and well-fed. She argues the dogs come to her underweight and are recovering from abusive homes.

"Would an abused dog do this?” Collins asked while petting a German Shepherd.

As for the puppies, Collins told FOX13 the litters were accidental. She later admitted some dogs are bred once every couple of years. The online ad shows dogs being sold for $300 to $400.

Collins said she did not know how many dogs were living in the home, but insists a puppy has never been killed.

“I just view it as: So many dogs have saved my life to the point where I’m going to save your life because this dog saved mine,” Collins said, pointing to one of the dogs.

However, Collins refuses give Midnight back to the Meloneys. She said she is using the dog as a service animal for her boyfriend. FOX13 did not see the dog in the yard on Monday.

“We want not only our dog back, but we want these other dogs to be elsewhere besides a place that is underfed and make them ten times sicker,” Meloney said.

Collins said Animal Haven is not registered as a non-profit animal rescue. Roy City Code does not allow residents to own more than two dogs at a time.

Gwynn said officers are reviewing the case with the Weber County Attorney but no charges have been filed.