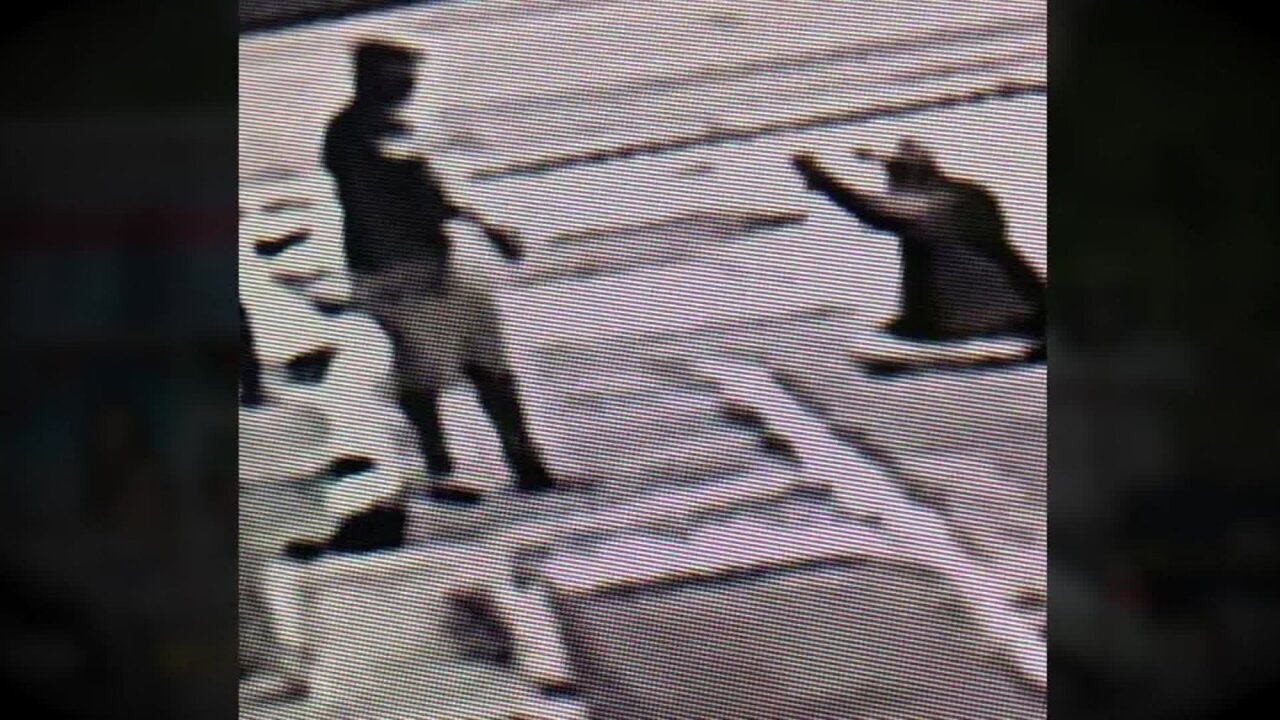 Michael Drejka did not take the stand Friday as the defense rested in his manslaughter trial for killing an unarmed man outside a convenience store in Florida last summer. Source: Surveillance Video

Jury deliberations began in Michael Drejka’s manslaughter trial Friday afternoon after he did not take the stand in his defense for the killing of an unarmed man outside a convenience store in Florida last summer.

The family of the victim, Markeis McGlockton, filled the first row of the courtroom in Clearwater on a day defense attorneys rested their case with two expert witnesses who testified about the defendant’s state of mind and his actions at the time of the controversial shooting.

The court later instructed jurors on the law before closing arguments in which prosecutors portayed Drejka as an armed vigilante and defense attorneys described him as a victim who feared for his life.

Prosecutor Fred Schaub quietly told McGlockton’s family before the closings, “I bet you never thought this day would come.”

In closing for the state, Scott Rosenwasser urged jurors to ask themselves whether the defendant was justified in shooting an unarmed man who was, he said, trying to protect his family and retreating when he was killed.

He called the shooting intentional, saying Drejka faced no imminent bodily harm or death and that he took “the most perfect shot he could take.”

Rosenwasser said the case was “cut and dry,” the killing of a man who came out to protect his girlfriend from a self-proclaimed “parking lot vigilante” with a “pet peeve” about enforcing handicap parking rules.

Rosenwasser reminded jurors that Drejka admitted to police that he would have no reason to shoot if the victim was retreating.

“The defendant himself tells you it’s manslaughter,” the prosecutor said. “You know what Markeis McGlockton is guilty of? He is guilty of loving and trying to protect his family and he died because of it.”

The families of McGlockton and his girlfriend were not in the courtroom for the defense team’s closing, delivered by John Trevena. He said his client was thrown to the ground and would have been “beaten to a pulp” had he not firmly stood his ground to a younger and larger aggressor.

“The right to stay alive is the most fundamental right,” he said.

Drejka was not the vigilante portrayed by the prosecution but a man who believed himself to be in mortal danger, Trevena said.

“Mr. Drejka thought the danger was real,” he argued. “This large man pushed him to the ground. The threat was real.”

Had Drejka not pulled his weapon, he could have died, the defense attorney said.

“He had the right to stand his ground and no duty to retreat,” Trevena told the jury.

The case amounted to more than a parking spot dispute, he said. It centered on his client — the “true victim”– making “a split-second decision” after being violently thrust to the ground.

“The game changed when the gun was pulled. …Then the game was over,” he said.

Thursday, video of the defendant’s police interview, including Drejka’s reenactment of the July 19, 2018, shooting in Clearwater, was played in court.

His attorney has maintained the killing was in self-defense after Drejka was threatened and then shoved to the ground.

After he shot McGlockton, Drejka told police that he fired only after the man pushed him down and ran at him.

But surveillance video shows McGlockton taking several steps back in the moments before the fatal shot — a point on which police have challenged Drejka.

“What happens if I told you that I looked at the video and at no time and point does he come running up toward you? He actually takes a step back,” Det. Richard Redman asks Drejka the day of the shooting.

“I would disagree,” Drejka responded.

The prosecution rested its case Thursday after two days of testimony.

The incident began when Drejka confronted and began yelling at McGlockton’s girlfriend, Britany Jacobs, who was parked with two of her children in a handicapped-accessible spot outside a Circle A food store. As their argument escalated, McGlockton came from the store and shoved Drejka to the ground.

Drejka then pulled out his gun and fired at McGlockton, who had taken several steps back, the surveillance video shows.

In opening statements, defense attorney Bryant Camareno argued that Drejka’s comments to police were simply his best recollection and showed his perception at the time.

“He wasn’t lying; he was remembering the best that he could from the impact that he sustained,” Camareno said.

The state’s “stand your ground” law, passed in 2005, allows people to meet “force with force” if they believe they’re under threat of being harmed.

‘What else should I expect?’

Drejka’s attorneys are no longer arguing that he should be immune to prosecution because of “stand your ground.” He mentioned it at the end of his police interview.

“(Unclear) the ‘stand your ground’ thing, and I did exactly what I thought I was supposed to be doing at that time considering what was happening to myself,” he says on the tape.

In the police interview, Drejka got down on the ground to reenact the moments of the fatal shooting. He said that he was shoved from the side and thought McGlockton was going to kick and beat him.

“If he was going to hit me that hard to begin with, a blind side from the get-go, what else should I expect?” Drejka said.

Police questioned him several times on the discrepancy between the video and his statements that McGlockton took steps toward him.

“That is exactly what I saw,” Drejka insisted.

In addition, he said he fired just one shot to “neutralize” what he saw as a threat.

“I shoot to save my own ass, and that’s that,” Drejka said in the interview.

McGlockton had MDMA in his system

Thursday also featured testimony from a police use-of-force expert and a pathologist who examined McGlockton.

In his police interview, Drejka mentioned the 21-foot rule — the general idea that a suspect within 21 feet can attack an officer faster than the officer can pull a weapon and fire. But Roy Dedary, a police trainer, testified for the prosecution that the rule does not mean you can shoot someone within 21 feet.

A forensic pathologist testified that McGlockton had MDMA, also known as ecstasy, in his system when he died.

Bruce Goldberger, a toxicology expert for the prosecution, said that MDMA is a social drug and causes empathy and euphoria. He testified it does not cause aggressiveness or impulsiveness.

Defense witness Daniel Buffington, a clinical toxicologist expert, said the amount of MDMA found in McGlockton’s body was “significantly higher” than in a clinical setting.

Buffington, an associate professor at the University of South Florida’s pharmacy department, said the drug causes confusion and aggression and had adverse effects on how McGlockton acted.

Rosenwasser sought to challenge Buffington’s opinion about MDMA during cross-examination. He asked whether Buffington would agree that euphoria is one of the most common results.

“Yes, followed by depression and other neurobiological side effects,” Buffington said.

Rosenwasser pointed to an article Buffington used as basis for his opinion, which said the drug most frequently produces euphoria and empathy.

“I’m not saying those don’t happen. I’m saying that there’s no predictability that that’s going to be the outcome you achieve,” Buffington said.