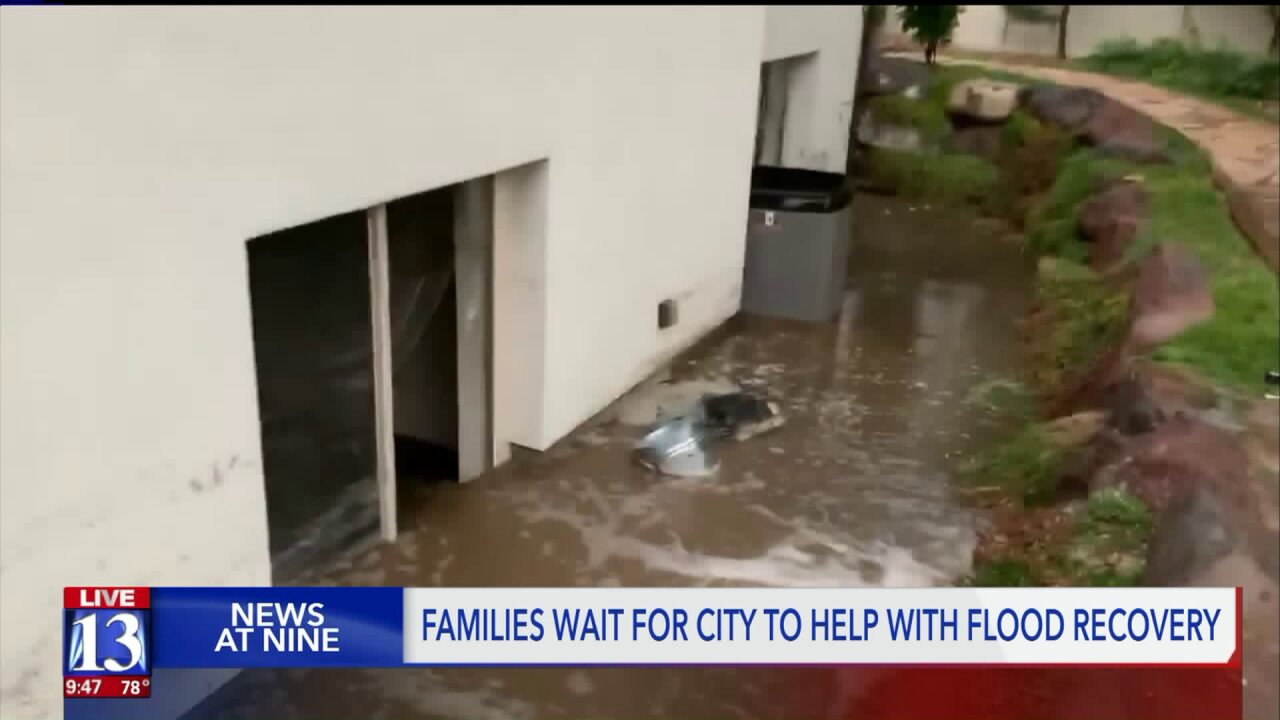 COTTONWOOD HEIGHTS, Utah — Families in Cottonwood Heights are still dealing with major flooding damage to their homes from this month’s storm, and they’re becoming increasingly concerned the city’s insurance company will try to avoid having to pay for damages by labeling the storm as an “act of God.”

Rex Leetham, who lives on Scottish Road, said he had to drain 33,000 gallons of water out of his basement because of the city’s inadequate draining system.

He shared video with FOX 13 showing the water flood into his house through a window that broke from the pressure.

“I was just kind of dumbfounded,” Leetham said. “I have a lifetime of vinyl that I’ve collected, and it was all floating around the basement.”

Leetham contacted FOX 13 after seeing another story about a man who lives a few miles away from him, also in Cottonwood Heights.

John McEntire suffered major flood damage to his home because of a geyser that shot thousands of gallons of water into the air from a different storm drain, leaving a giant crater in his backyard.

“Right now the pipe is totally smashed… Totally corroded,” McEntire said. “(Travelers Insurance) said their policy for the city doesn’t cover acts of God, and that would be an act of God, an extreme amount of rainfall.”

“I had a friend text or email me the story that you guys originally ran on John’s house where the drainage system collapsed,” Leetham said. “That’s when I called you… Both Cottonwood Heights and Travelers told me — initially — that it was an act of God, but they were going to do an investigation.”

Leetham argues that the flooding to his home was not an act of God because there have always been problems on his street. He blamed a small drainage system with only a few grates, dating back to before Cottonwood Heights became an incorporated city from Salt Lake County.

Neighbors said they believe much of the city’s water eventually passes through the drainage system, which is why one of the grates in front of Leetham’s home overflowed, pouring water directly into his yard and then breaking through a closed window into his basement.

“I heard they were going to redo the drainage system on all of Scottish Drive, starting this Fall. Which is very good news,” Leetham said. “I just would hope that this doesn’t ever happen to anyone else.”

Tim Beery, a spokesperson for Cottonwood Heights, said the city has not decided whether to make changes to the drainage system because the public works department is “unsure” whether the system is up to code. The city is currently running an analysis on the drainage system, Beery said.

Both Leetham and McEntire said they are hopeful Travelers Insurance finishes a thorough investigation before making a determination on whether the damage to their homes was truly an act of God.

“Obviously we would like to be compensated for our damages. It’s very expensive,” Leetham said.

A spokesperson for Travelers Insurance said he could not reveal how many claims have been opened as a result of August’s storms, citing “proprietary reasons” and “company policy.”