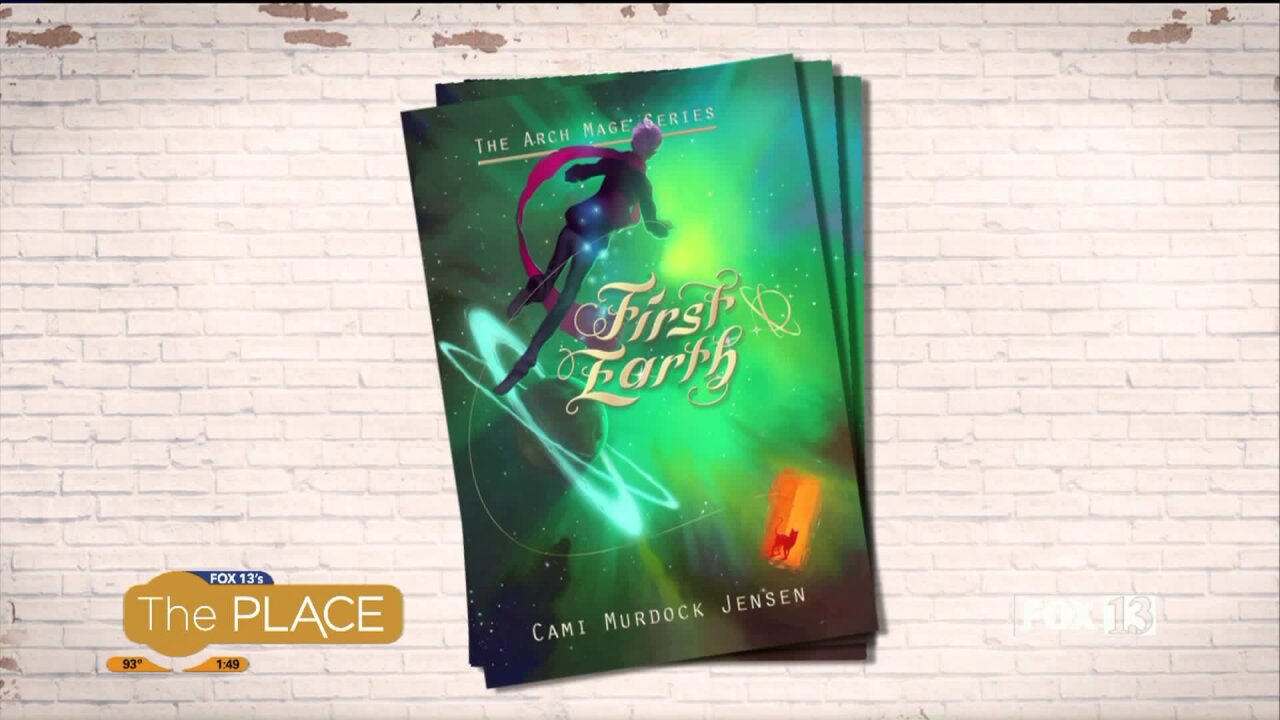 Today, we got to meet a Utah-born author with a new book out called, First Earth!

Cami Murdock Jensen was the only girl in a family of eight kids growing up in Spanish Fork, Utah.  Now, she's a mom to six amazing children.  Yet she still found the time to write fantasy novels as she has always loved the genre and felt she could tell beautiful stories that her children could enjoy and relate to.

First Earth Synopsis
As a baby, Agnes Ann Cavanaugh miraculously survives an explosion that kills her father. A white light radiates from her and protects her from the flames, however, she is scarred on her face, neck and shoulders, and sustains nerve damage in her legs.
Sixteen years later, a benefactor and family friend, Dr. Buchanan, offers her a chance at an internship. His latest work takes Agnes to view an ancient artifact, the Jamdat Nasr tablet. Agnes reads a stanza aloud. A tidal wave of power pours into her and settles in her chest. Immediately, a woman rushes into the room. She is young, and pretty, but Agnes sees a horrifying ghost-woman with long purple hair scrunched inside the human skin. The ghost attempts to kill Agnes, but an old man in the library opens a passage to another world, instructs her to grab the tablet, and jumps in, saving Agnes's life.

They travel through space, and the old man's cat, Grimmal, talks, causing Agnes to drop the table.

The old man, Temnon, explains that they are now on First Earth, one of hundreds of worlds where magic is common. Agnes demands to go home, but cannot without the tablet she dropped. Temnon tells Agnes of a war waging on First Earth between the King, and his daughter, Princess Nemantia, the woman who tried to kill her. The princess had been draining all the wizards on First Earth of their power in an attempt to rule the universe.

Agnes also learns she is a wizard also, with jurisdiction over all the magical power on Second Earth, an enormous amount, since it is not divided among thousands of wizards like on other planets. This vast amount of power is why Nemantia targeted her. Agnes has no idea what kind of magic she has or how to use it, but she can see magic used by others.

After meeting a dragon named Dominath, Agnes sees herself as cowardly and selfish and she decides to help Temnon find her tablet. She follows her tablet`s signal to Nemantia`s fortress. Temnon uses matter-shaping to sneak in and they find the tablet, but also discover Nemantia has amassed an unbeatable army of demons.
Afraid for Agnes`s safety, Temnon sends Agnes home. But she realizes Nemantia is actually being controlled by an ancient wizard named Vi Lorina. Horrified that the king has to kill his own innocent daughter, Agnes decides to join the battle. The cat, Grimmal, followed her and helps her return to First Earth.

Agnes and Grimmal join the Royal army, where she informs the king of her discovery. They don`t know how to kill Vi Lorina without hurting Nemantia. They trap the demon army in a magic field, but Vi Lorina uses her stolen power to create an army of solidified light. A devastating battle ensues. Agnes and Temnon must defeat the witch, rescue the princess, and save hundreds of worlds from destruction. But Agnes must discover how to use her power, or become a victim herself.

First Earth is the first book in The Arch Mage Series. You can purchase it here.