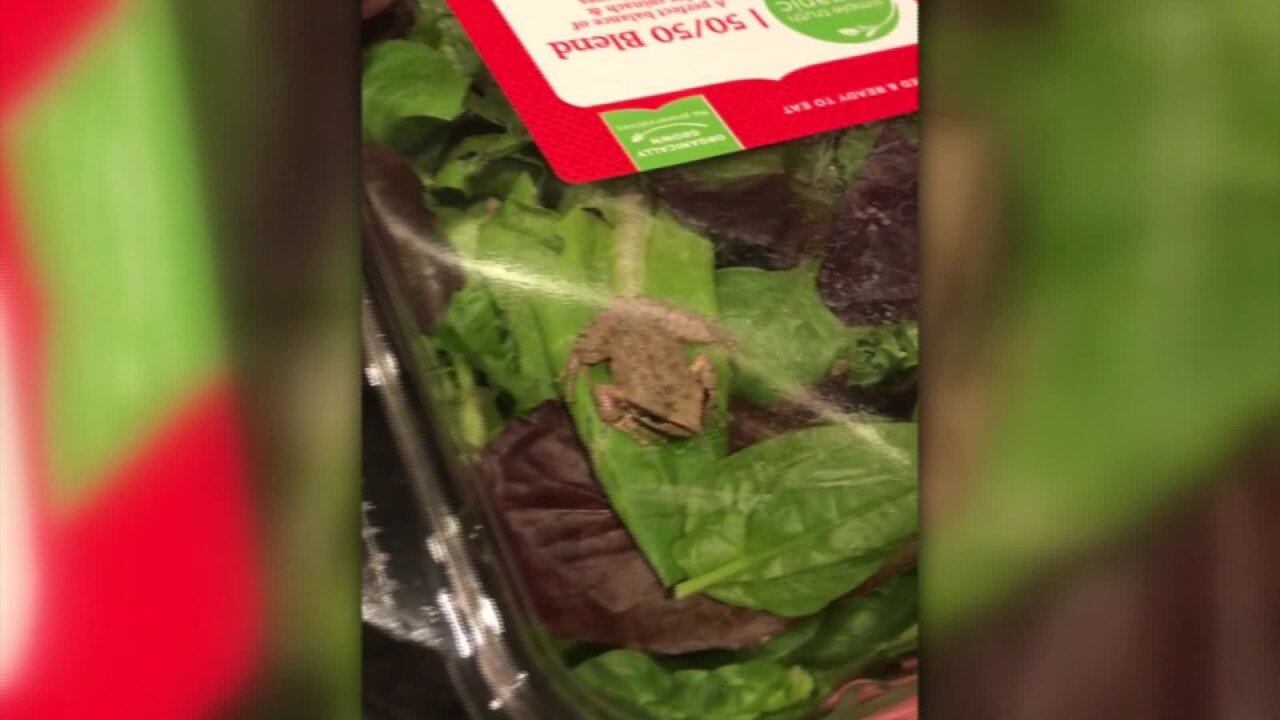 A family in North Shore, Wisconsin, found a live frog in its store-bought salad, according to CNN affiliate WTMJ. And the store acknowledges it happens sometimes.

NORTH SHORE, Wisc. — You might want to take a close look at the next organic salad you eat.

A family in North Shore, Wisconsin, found a live frog in its store-bought salad, according to CNN affiliate WTMJ. And the store acknowledges it happens sometimes.

It was an ordinary Tuesday for Karlie Allen and her family. After buying groceries from a Pick ‘n Save in Glendale, they began preparing dinner. Then, they found a surprise guest in their packaged Simple Truth Organic lettuce.

“I’m across the room, and I hear a shriek and a thud,” Allen told WTMJ.

And that’s when she saw it — a living frog in their organic salad greens.

“Holy moly, this is this is happening,” Allen said.

So she pulled out her phone and started recording the frog crawling around inside the salad carton.

The family had planned on returning the lettuce, frog included, to Pick ‘n Save, but somehow the little amphibian escaped overnight.

Allen still brought the salad back to the grocery store and showed the clerk the video she took.

While Allen received a refund, she still wanted some answers.

“I just want to know how somebody didn’t notice it or how it even managed to get though the packaging process alive,” she said.

Simple Truth apologized to Allen in a direct message on Twitter.

“We are so sorry that the Simple Truth product had a live frog inside of the carton,” the brand said.

“USDA Certified Organic items must be free of synthetic additives and certain pesticides,” the company said in a statement. “Although rare, from time-to-time we do see insects and other small animals such as frogs make it through packaging with fresh produce items. In this instance the customer returned the organic lettuce for an even exchange.”

While this may not be a new occurrence for food and grocery companies, Allen told WMTJ she doesn’t plan to eat salad any time soon.

“This is in a box of lettuce that’s supposed to be triple washed and organic and healthy,” Allen said.