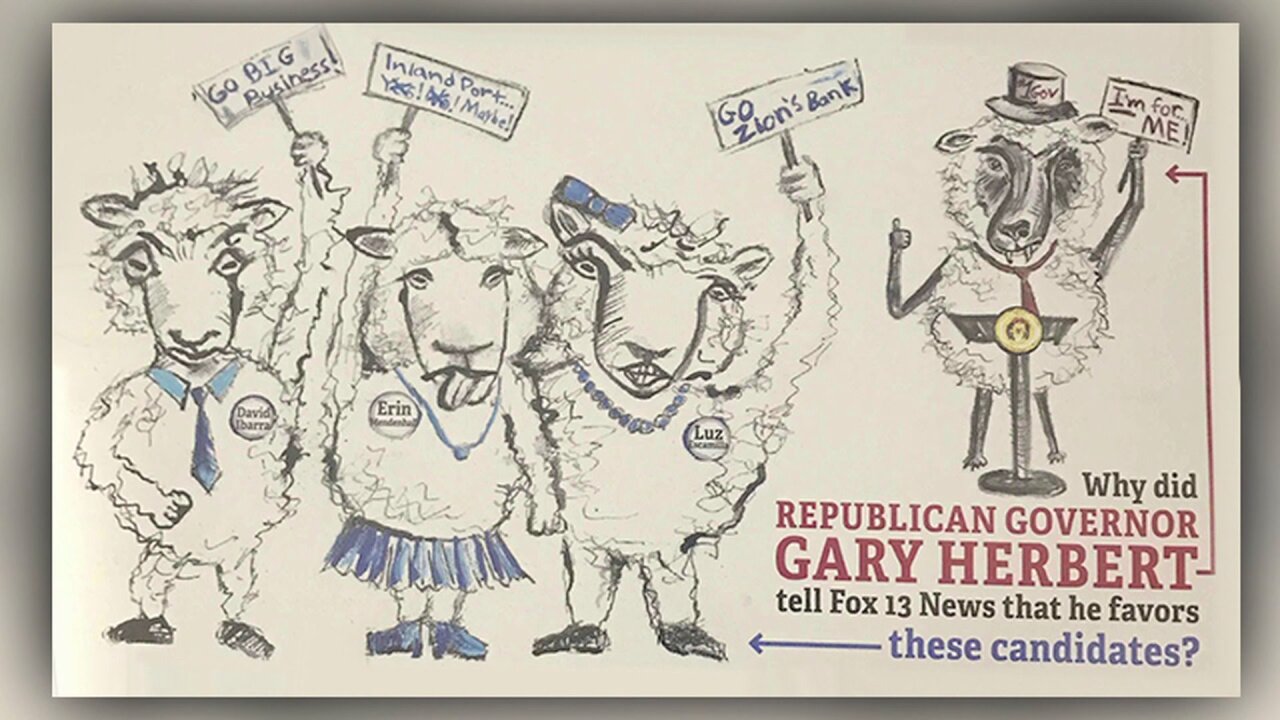 SALT LAKE CITY — Some of the candidates for mayor are blasting a series of mailers and other ads blanketing the city in the weekend ahead of the primary election, saying “dark money” is being spent on the high-profile race.

Stan Penfold also criticized the influx of last-minute dark money in the race.

“We are a true grassroots campaign and the flow of dark money into a local campaign for mayor is disturbing,” he said.

A mailer was sent out from a political action committee called “People4SaltLakeCity PAC” that highlighted remarks Governor Gary Herbert made to FOX 13 during his monthly news conference in June. It depicts the governor and candidates Erin Mendenhall, Luz Escamilla and David Ibarra as cartoon sheep. It seemed to criticize the candidates whom the governor said he liked in the mayor’s race.

A message left at a number registered with People4SaltLakeCity PAC was not immediately returned on Friday.

“Negative sells today is what I’ve learned. The bad part about politics is people drift to the hate side,” said David Ibarra. “For me, I’m offering up what I do for the right reasons.”

“It’s to be expected,” Escamilla’s campaign manager Rudy Miera told FOX 13 of the mailer. “But we’re trying to run a clean campaign and that’s what we’re doing.”

At a news conference on Friday, Dabakis criticized PACs jumping into the race, including billboards being run for certain candidates backed by Reagan Outdoor Advertising. He has threatened to push an ordinance for stronger campaign finance disclosure laws.

“I believe we ought to have full disclosure of who’s who. It’s interesting the only one who’s crying the loudest has got the name ID,” he said. “I don’t know why he’s complaining. Because he wants to keep anybody from being able to gain ID?”

“Another mysterious new committee backing a certain candidate sent out another ridiculous mailer to Democratic voters suggesting we were actually Republicans in disguise,” the post read. “I’ve been endorsed by Salt Lake City’s working families because I share their values and will work every day on behalf of those values.”

Mendenhall said the people behind the mailer “don’t even have the courage to put their names on their attacks against me” and “hide behind goofy drawings and misleading claims because they think that tricking voters is the only way their candidate will make it to the general election.”

The Utah Lt. Governor’s Office has been attempting to contact an unregistered PAC that has been running TV ads favoring Escamilla. Her campaign said they do not know who is behind them.

“We appreciate the good will, but we don’t know who’s running it,” Miera said.

David Garbett’s campaign said it was ignoring the PACs. A mailer paid for by another political action committee praised his environmental policies and insinuated his opponents also supported them (they did not).

“Our campaign is working as hard as it can to persuade voters. I don’t feel that we have the time or ability to focus on what others are doing, as it’s out of our control,” Garbett said in a statement Friday night. “My focus is to get out and talk to as many people as I can.”