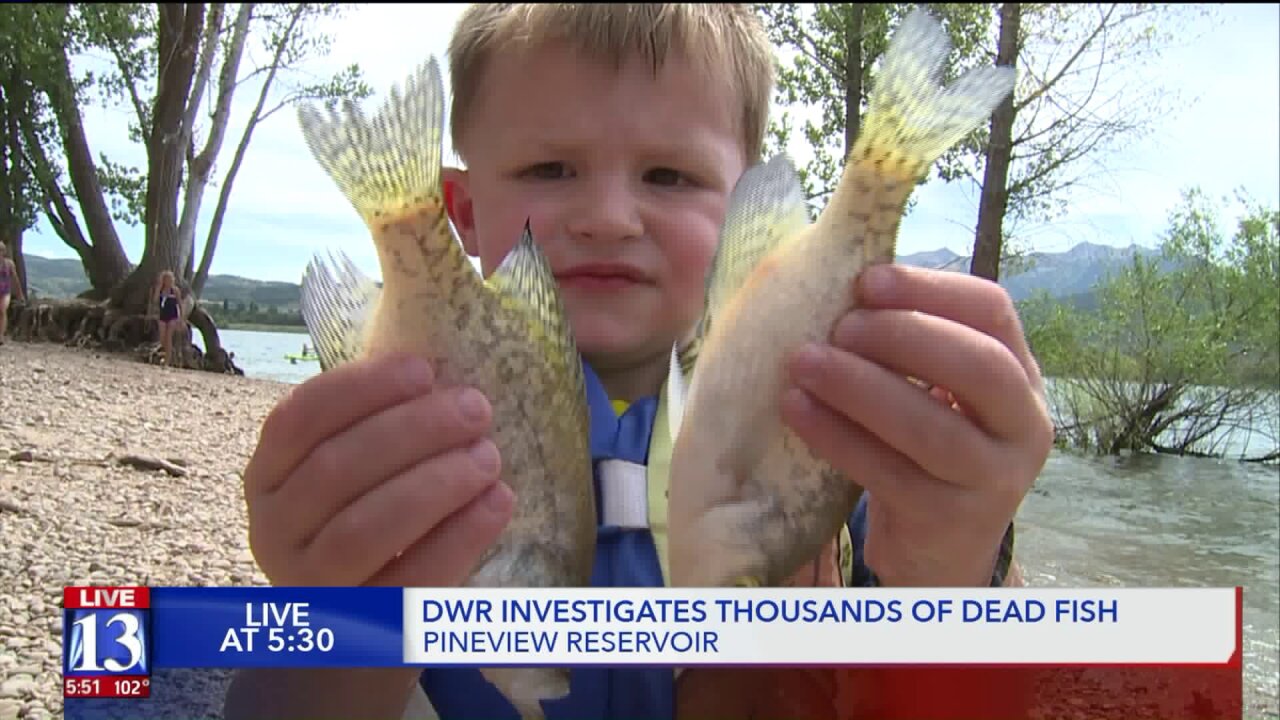 HUNTSVILLE, Utah — Thousands of dead fish have surfaced at Pineview Reservoir in Huntsville, attracting flies and scaring away swimmers.

Only a specific type of fish, the black crappie, seems to be affected, according to the Utah Division of Wildlife Resources.

Mark Hadley, the northern region outreach manager for DWR, said he believes the unusually high amount of deaths are from a large amount of black crappie competing for a small amount of oxygen in the water.

"The black crappie population at Pineview is doing really really well," he said. ""The water’s going down, the temperatures are going up."

Small black crappie tend to stay in shallow water to avoid predators, but this tends to present a different type of danger.

"Some areas in the shallow water — the water’s 80 degrees. That’s really a high temperature for fish," Hadley said. "So you put all of those factors together and then the fish start to die."

Carson Cooper, who was too afraid to go into the water when he saw dead fish all over the beach, posted photos on Facebook garnering hundreds of reactions.

"I don’t know what’s going on here, but they’re dying every day," Cooper said. "I was worried that maybe there’s like a chemical that got into the water."

"We don’t think it’s a water quality issue," Hadley said. "We don’t know for sure how many fish we’ve lost this summer so far, but it’s likely in the thousands."

The Weber-Morgan Health Department has taken samples of the water, which have not shown anything dangerous. Crews have since collected more water samples now that the number of dead fish has risen.

Jodi Kirkland visited Pineview Resevoir recently with her family. She initially wanted to come back for her niece's birthday party, but decided it would be a bad idea because of the dead fish.

"When you look out, it’s just a sea of silver dead fish all over the lake," Kirkland said. "We smelt like dead fish the whole way home, so that was really gross."

Despite multiple complaints about dead fish odors plaguing the beach, Hadley said it's best to let nature run its course instead of going to pick up the dead fish.

"They’ll decompose, you know, return to the ecosystem that way," he said. "There’s still tens and tens and tens of thousands of crappie in Pineview. This should really not affect fishing at all."