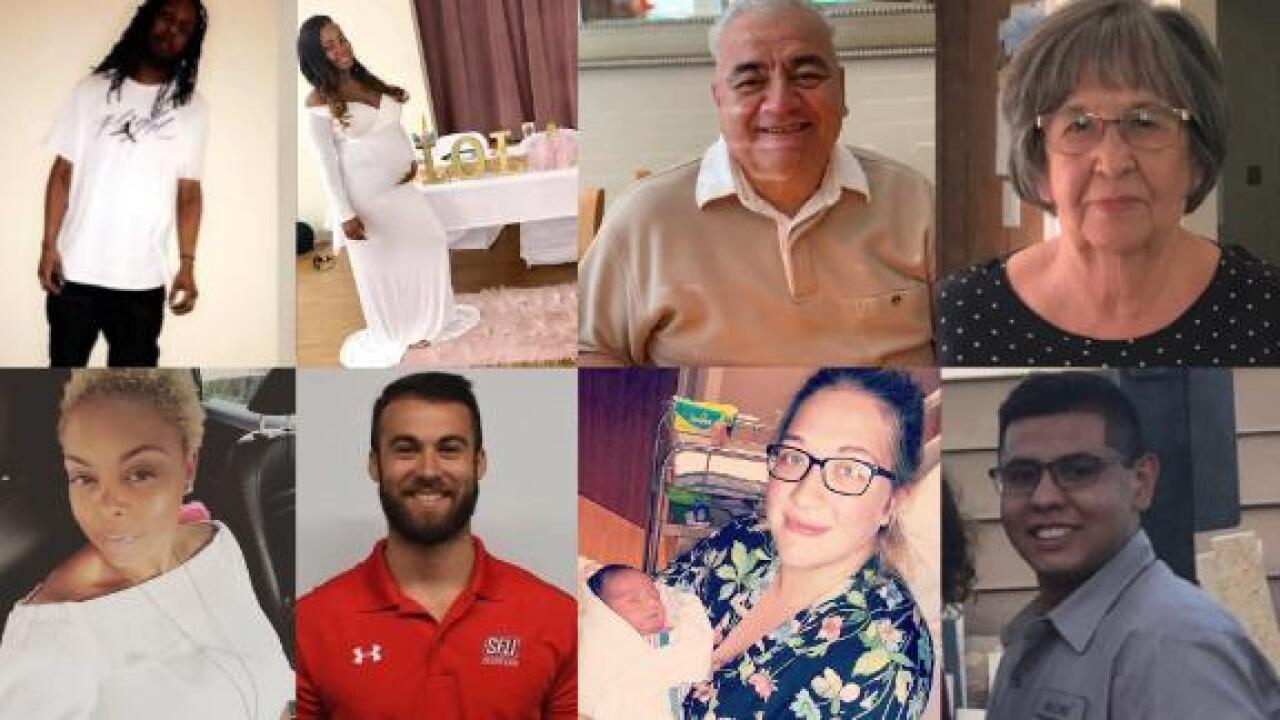 They were parents, grandparents and spouses from both sides of the US-Mexico border whose lives were cut short in one of America’s most familiar places.

Police in El Paso, Texas, have identified the 22 people who were killed in a shooting at a Walmart store on Saturday. Authorities said a white supremacist from Dallas drove hundreds of miles for his deadly mission.

The dead include 13 Americans, eight Mexicans and one German. The last moments of their lives before the shooting began could not have been more routine.

One couple was shopping for school supplies for their daughter. Another couple had just dropped off their dog at the groomer. A man from Mexico was visiting his granddaughter as she raised money with her soccer team.

On Monday, the death toll rose from 20 to 22 after two of the wounded died from their injuries.

Here’s what we know about the victims so far:

These people died protecting their families

Jordan and Andre Anchondo had gone to the store after dropping off their 5-year-old daughter at cheer practice, Jordan’s aunt Elizabeth Terry told CNN.

The couple brought along their 2-month-old son as they shopped for school supplies for their daughter.

Only the little boy would survive.

As the gunfire erupted, Jordan, 24, shielded her baby, Terry said. Andre, 23 jumped in front of his wife, said another relative, Jesse Jamrowski.

“How do parents go school shopping and then die shielding their baby from bullets?”

In addition to their 5-year-old-daughter, the couple leaves behind another child, aged 2.

The first call of an active shooter went out at 10:39 a.m. local time, authorities said. Around 2 p.m., Anchondo’s relatives started calling each other, saying the couple was not answering their phones, Terry said.

The baby was “pulled from under her body,” said Terry, the sister of Anchondo’s father, Paul, for whom the injured infant is named. The infant suffered broken fingers but is home with family, Terry said.

Jordan Anchondo died alone at the hospital because no friends or loved ones were able to immediately find her, her aunt said. “It took us a while to confirm and identify her throughout all the chaos,” she said.

The couple had recently celebrated their first wedding anniversary.

The couple was grocery shopping and picking out a present for Kaitlyn, the family told CNN’s Anderson Cooper.

It didn’t surprise his family that Johnson risked his life for them. He doted on his granddaughter, spending time with her after work on science experiments, Melendez and her sisters said.

Kathy Johnson told her daughters that the gunman got as close as two feet from them. Johnson was shot after he pushed down his wife and granddaughter and covered them, Melendez said.

“I was so close to losing her but because of him she is still here,” Melendez said. “I wish he was here so I can tell him how thankful I am.”

Arturo Benavides, 60, was an Army veteran and a bus driver who loved telling stories of his days in the service as an Army staff sergeant.

His niece Jacklin Luna described her uncle as popular and beloved.

“He was an absolutely caring and strong-willed man,” she said. “He was the person that would give any dime and shirt off his back, a meal and a home to anyone.

The family didn’t realize anything was wrong until the groomer called them and said the dog hadn’t been picked up, Al Hernandez said.

A family member tracked the GPS of their vehicle to the Walmart parking lot, KFOX/KDBC reported. Later, the family learned from police that both Campos and Hernandez died in the shooting, according to the affiliate.

“He deserves nothing less than the world to know everything he did and the love he had left to share,” Luna said.

Will Englisbee told CNN that his brother spoke to their mother, Angie Englisbee, 86, when she was in the check-out line at Walmart at 10:31 a.m.

On Sunday, the family learned she was killed in the shooting, Will Englisbee said.

Families searched for loved ones, only to find out they died

Over the weekend, the district put out a call for information on their Facebook page as relatives struggled to locate him.

“We are deeply saddened to learn of the loss of one of our students, Javier Amir Rodriguez, who formerly attended Horizon HS,” the district said in a post on its official Facebook page. “Our heartfelt condolences and prayers are with his parents and family.”

Antonio Basco told CNN he went to different hospitals looking for his wife, Margie Reckard, but hospital staffers wouldn’t tell him anything.

It wasn’t until Sunday afternoon that a group of five FBI agents approached him and told him his 67-year-old wife had been killed, he said.

Jorge Calvillo García from Torreón, Mexico, was visiting his son, Luis Calvillo, and granddaughter, Emily. The three were outside the Walmart raising money for Emily’s soccer team when gunfire erupted.

García shielded his granddaughter and her teammates from the bullets, relative Raul Ortega told CNN affiliate KFOX. He said the girl’s father, a coach for the soccer team, was also shot and is in critical condition.

Juan Velazquez, 77, died at the hospital on Monday after being shot in the parking lot.

He was at the store with his wife, Nicholasa, who was also shot and is recovering in the hospital.

They had just parked their car when they were shot, Fuentes said. Nicholasa was able to call Fuentes’ mom and tell them what had happened, she said.

Sara Esther Regalado and Adolfo Cerros Hernández were among those killed in the rampage.

Regalado was from Juarez and Hernández was from Aguascalientes.

“Thank you very much to all the people who have been attentive to my family and me. I know my mother will get all that love that we share,” her son Antonio posted to his Facebook page.

“How much love you gave me. How much strength you taught me. Having been your son and your student of life has been the best of my life. Thanks mom. Love you.”

Gloria Irma Márquez of Juarez was remembered as “a dedicated mother, grandmother and friend.”

The other two Mexican victims were identified as María Eugenia Legarreta Rothe from Chihuahua and Ivan Filberto Manzano from Ciudad Juarez.

Other victims identified in the shooting

The other victims identified, according to Police Chief Greg Allen, include: US citizens Maria and Raul Flores, both 77; German citizen Alexander Gerhard Hoffman, 66; US citizen Luis Alfonzo Juarez, 90; and Mexican national Teresa Sanchez, 82.