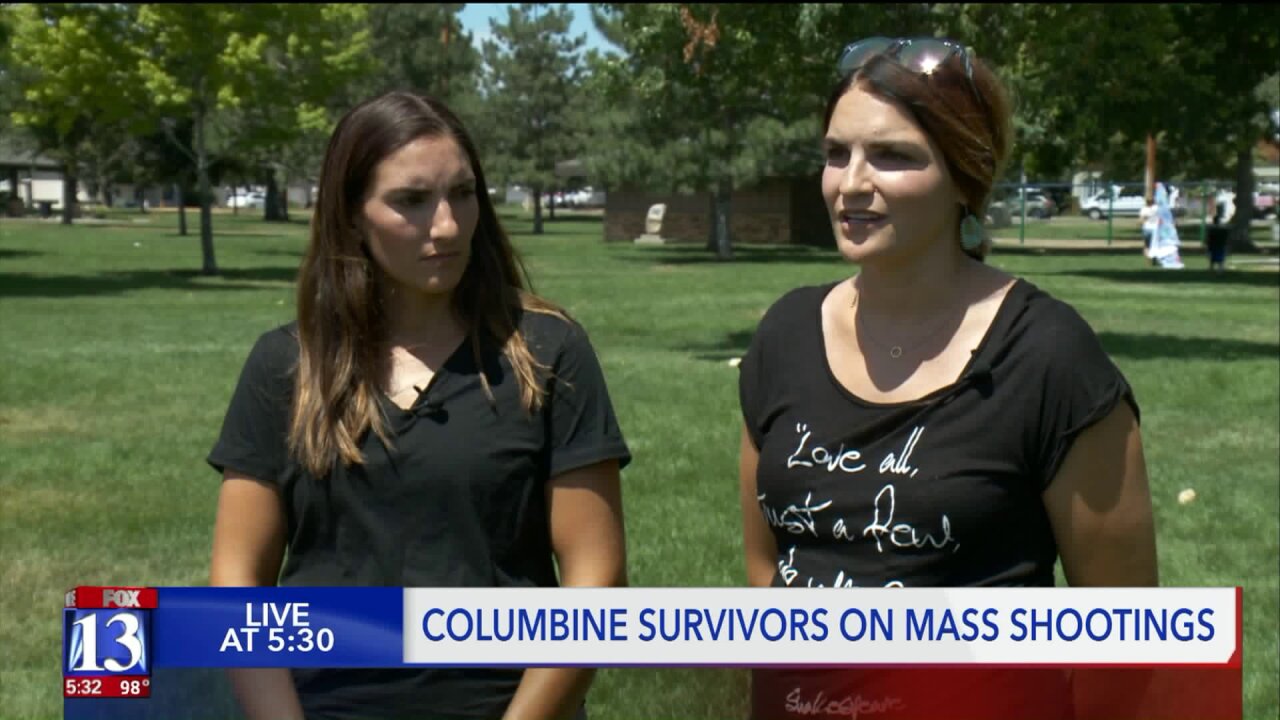 Emotions are still raw after two mass shootings within 24 hours of each other — especially for two sisters in Utah who survived the Columbine High School shooting in 1999.

Sarah Bush was 16 years old and her sister Laura Hall was 14 when their lives changed forever after going to school.

“It felt like living in a horror movie,” Hall said. “It felt like what you would see on a really scary movie that’s not real, but it was very real.”

Students running with their hands in the air, police surrounding their school, the memories from 20 years ago are still there. For them, watching those in El Paso, Texas and Dayton, Ohio go through something similar is heartbreaking.

“It’s like a sucker punch to the gut every time,” Bush said. “It kind of knocks you flat for a little bit, and then you have to remind yourself what you’ve overcome already, and you have to restart that process a little bit.”

Surviving and suffering, and now smiling together, Bush and Hall developed an inseparable bond from that day 20 years ago.

“It takes a long time to heal, and it’s discouraging to see it happening over and over again,” Bush said.

Both sisters healed through different timelines.

At first, the sisters said their family didn’t talk about what happened, but the continuous news coverage for the following two years kept it fresh in their minds.

“It reminds us of how we had to start from nothing and just build up some semblance of a normal life, and move on with your daily activities as though you are alive, living and well,” Bush said.

Being in the headlines, though, helped the sisters heal when they couldn’t find ways to express what they experienced themselves.

“Where we had that constant coverage, we had constant help,” Hall said. “I think nowadays people get forgotten when the news stops covering it. People think these people are fine now, but they’re not.”

Going back to daily life is what the sisters worry the most about for the families impacted by the mass shootings.

Still checking where exits are or feeling anxiety sending their kids off to school, the sisters said they understand what these families will go through for the rest of their lives.

“You’re going to feel like you’re in this dark abyss, but there is a possible future of happiness for you,” Hall said. “Open up and talk to people. Don’t hide your feelings and your sorrows away. People will listen and it needs to be talked about.”

Finding faith in humanity again was a huge struggle for the sisters, but they said they clung on to ounces of hope—and pray other survivors will do the same.

“The world, for the most part, is good," Bush said, "and you have to remind yourself of that every day."