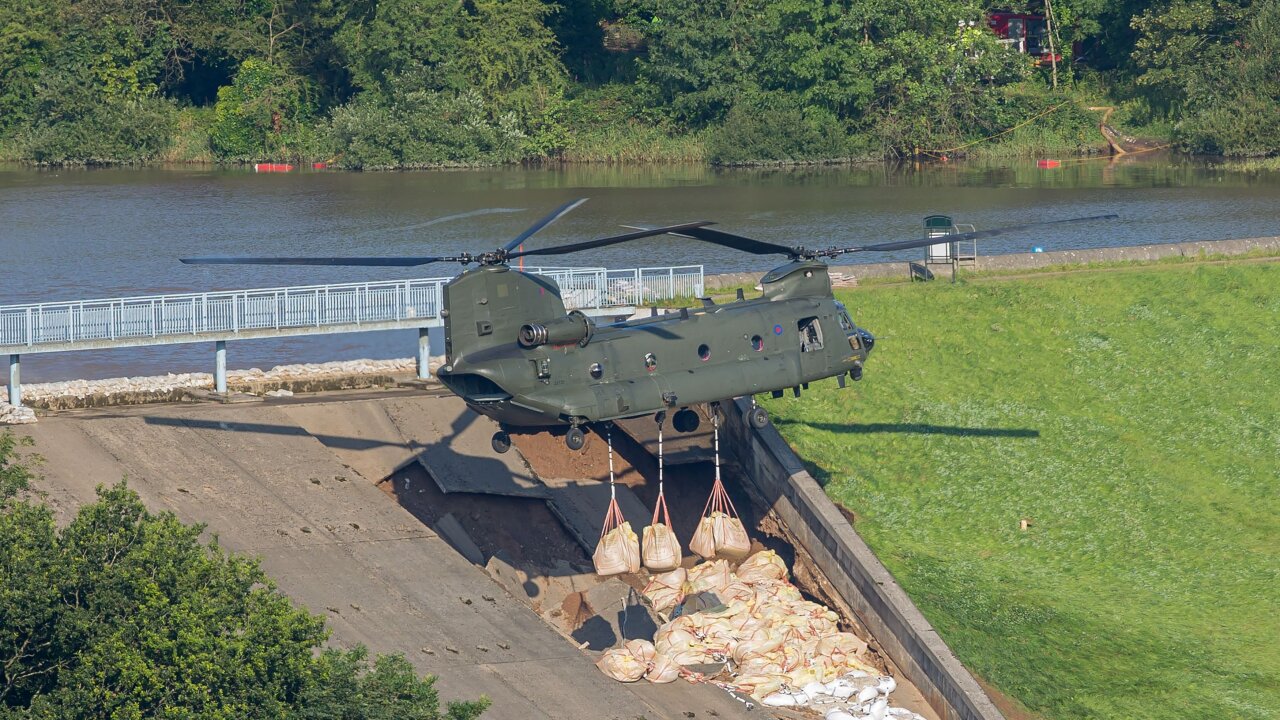 A damaged reservoir in northern England is threatening to collapse and submerge the town of Whaley Bridge in Derbyshire, prompting authorities to evacuate hundreds of homes in an emergency operation.

The army, environmental agencies and firefighters from across the country are part of a task force battling to shore up the crumbling wall of Toddbrook reservoir — which suffered extensive damage during flooding this week, Derbyshire police said in a statement.

More than 6,000 people were evacuated from the town following the partial collapse of a dam wall, the National Fire Chiefs Council (NFCC) said in a statement Thursday.

Police describe it an “unprecedented, fast-moving, emergency situation.” On Thursday, officers called for the evacuation of the town’s residents after images appeared showing a huge hole in the dam wall, the UK’s Press Association (PA) agency reported.

Local resident Marella Cairns, who lives below the dam, told CNN she was turned back while trying to drive back to Whaley Bridge on Thursday.

“Fortunately, my son’s girlfriend had been working nights, and was asleep at our house, and was still there. I asked her to grab the dogs, my medication and my knitting and to meet me at the evacuation center, which is the local high school,” she said.

After resting there “for a while” she moved to her brother’s house in Greater Manchester.

She said that the River Goyt, which is below the reservoir and runs in front of her house, “has never flooded” while she lived there.

On Thursday, the Environment Agency issued a “danger to life” warning covering the River Goyt.

A resident told PA that another section of the dam’s spillway also collapsed on Thursday.

“I’ve lived in Whaley (Bridge) for the best part of 45 years, and I’ve never seen water flood over the dam like that, ever, nor thought that we could possibly be at risk in this way,” Carolyn Whittle told PA.

The 45-year-old added that “another section of the concrete on the dam face has now collapsed.”

British Prime Minister Boris Johnson tweeted Friday that his “thoughts are with those who have had to leave their homes and all of those who are affected in #WhaleyBridge.”

Videos shared on social media by a local fire station showed a Royal Air Force Chinook helping to reinforce the dam wall and dropping sandbags to bolster the damaged part of the structure.

It helped “move more than 50 tonnes of aggregate into the reservoir wall to reinforce it,” the police wrote.

“The Chinook will also be dropping aggregate into other parts of the reservoir today [Friday], to stem the flow of water going into it,” police added.

“There are also a total of 16 high-volume water pumps which have been installed in the reservoir, in order to reduce the water levels,” officers said.

The plan to secure the reservoir includes using a total of 400 tons of aggregate to divert the flow, removing water with pumps to relieve pressure, and then start repairing the dam itself.

Julie Sharman, chief operating officer of the Canal and River Trust which runs the reservoir, said water flowing into Toddbrook has been “reduced considerably” thanks to additional pumping.

“We’ve lowered the level of the water in the reservoir by 200mm. We are obviously aiming to get that down considerably more,” she told BBC Radio 4’s Today program.

In a later interview with PA, she said while the important, water-retaining clay core of the dam is intact, it is vital to replace material lost when the earth was eroded.

“It is a critical situation at this point in time. And until we’re beyond that … the risk is a material risk and that’s why we’ve taken the action we have.”

In a statement Friday, the NFCC said “it is currently anticipated that the incident will run for at least 2 to 3 days.”

But it is still unknown when residents will be allowed back to their homes.

“We don’t know how long this operation will take to conclude but we and our colleagues in the emergency services, partner agencies, Environment Agency and military are doing everything humanly possible to save the reservoir wall and to protect the town,” Assistant Chief Constable Kem Mehmet said in a statement.

Scientists say that while it’s impossible to attribute a concrete weather event to climate change, the climate crisis is making episodes like this more likely.