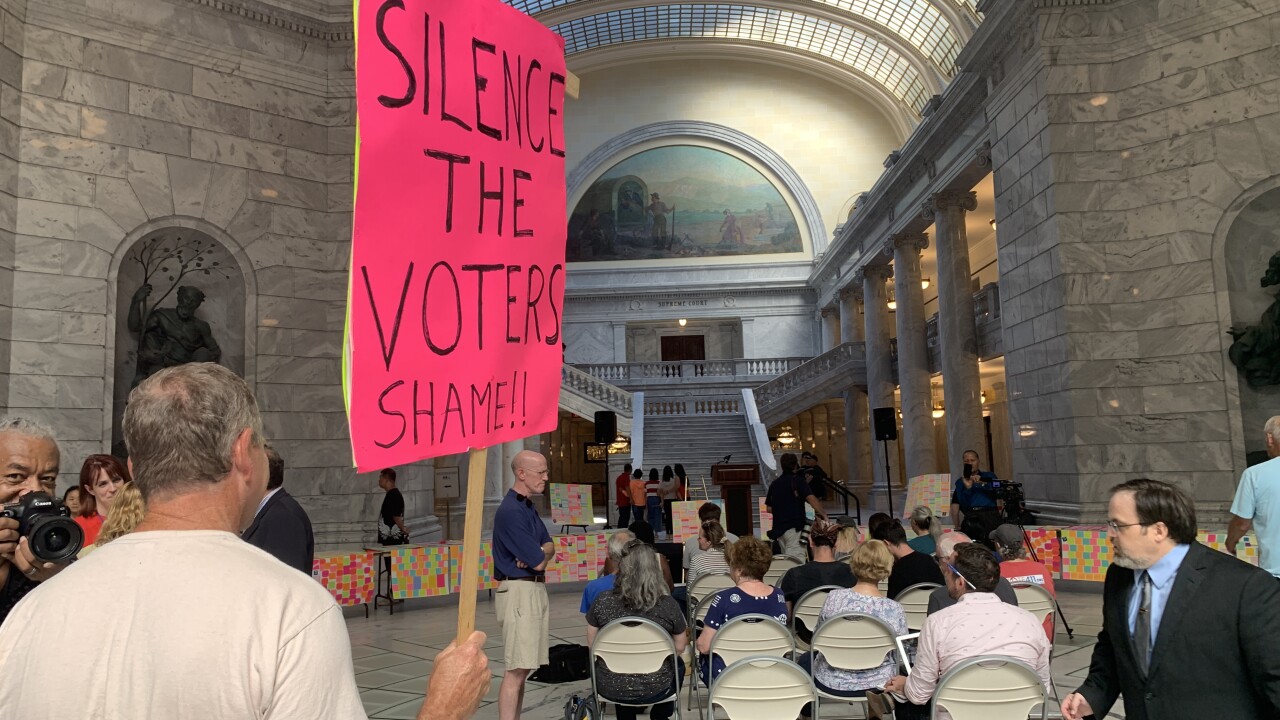 Demonstrators at a rally in support of Prop. 3. (Photo by Ben Winslow, FOX 13 News)

In a Q & A posted on the governor's website late Wednesday, it was disclosed the Utah Department of Health has been directed to continue to pursue a waiver even after the Trump administration said it would reject it.

"Although CMS announced last Saturday that it does not intend to approve the 90/10 funding match for a partial Medicaid expansion, CMS did not indicate whether it would approve other provisions in the waiver request. For this reason, there is value to the state in submitting the waiver and receiving feedback from CMS on all elements in the waiver request," the governor's office said.

That waiver includes enrollment and per capita caps on Medicaid expansion.

Voters approved Prop. 3 in November, which increased the sales tax to pay for Medicaid expansion, providing healthcare coverage for thousands of Utah's poorest. Lawmakers, concerned about the impact of ballooning healthcare costs to the overall state budget (that pays for schools, roads, etc.), overrode it and implemented Senate Bill 96. It created a series of cost splits with the federal government.

Backers of the bill were confident the Trump administration would approve the necessary waivers. Earlier this year, the feds approved a 70/30 split with Utah. But on Friday night, the White House gave Utah bad news when it rejected a 90/10 cost split.

"It just goes to show you the Trump administration is not an honest broker even with its own allies," said Rep. Jennifer Dailey-Provost, D-Salt Lake City, who sits on the House Health & Human Services Committee.

SB96 said that if the Trump administration refused, the ultimate fallback would be implementing full Medicaid expansion under Prop. 3, covering people up to 138% of the federal poverty level. The governor's office on Wednesday said it would pursue this other fallback plan -- which was also envisioned in SB96 -- before it got to that.

"As directed by SB96, the 'Fallback' waiver will also request approval to implement a community engagement requirement, a lockout provision for program violations, and a requirement to enroll in an employer’s health insurance plan (if offered) with premium reimbursement covered by the state," the governor's office said.

Prop. 3 supporters said Wednesday they were disappointed, but not surprised by the state's latest move. They were planning a rally on Thursday afternoon at the Utah State Capitol to call on the governor and lawmakers to implement what voters wanted in the initiative.

"We could have saved a lot of time and trouble on this. We predicted a lot of what has happened," said Stacy Stanford with the Utah Health Policy Project.

Standing by posters filled with thousands of comments in support of full Medicaid expansion in Utah, Stanford told a crowd of about two dozen that they needed to keep fighting.

"This is not something to keep playing political games with. Human lives are at stake. This isn’t about your partisan politics. This is about people. Get it done," said Paul Gibbs, a former Medicaid recipient who said the healthcare saved his life when he faced kidney issues and thousands in bills.

The governor's post said the state is committed to "ensuring that Medicaid is both fiscally sustainable while also providing coverage to people who truly need it" but insisted its approach was more financially prudent.

"Utah Medicaid continues to compete for available General Fund dollars primarily collected from a structurally narrowing sales tax base," the governor's office said. "Therefore, it is simply unrealistic to adhere to a false choice of either increasing taxes to sustain the program or to withhold benefits from those who need them most."