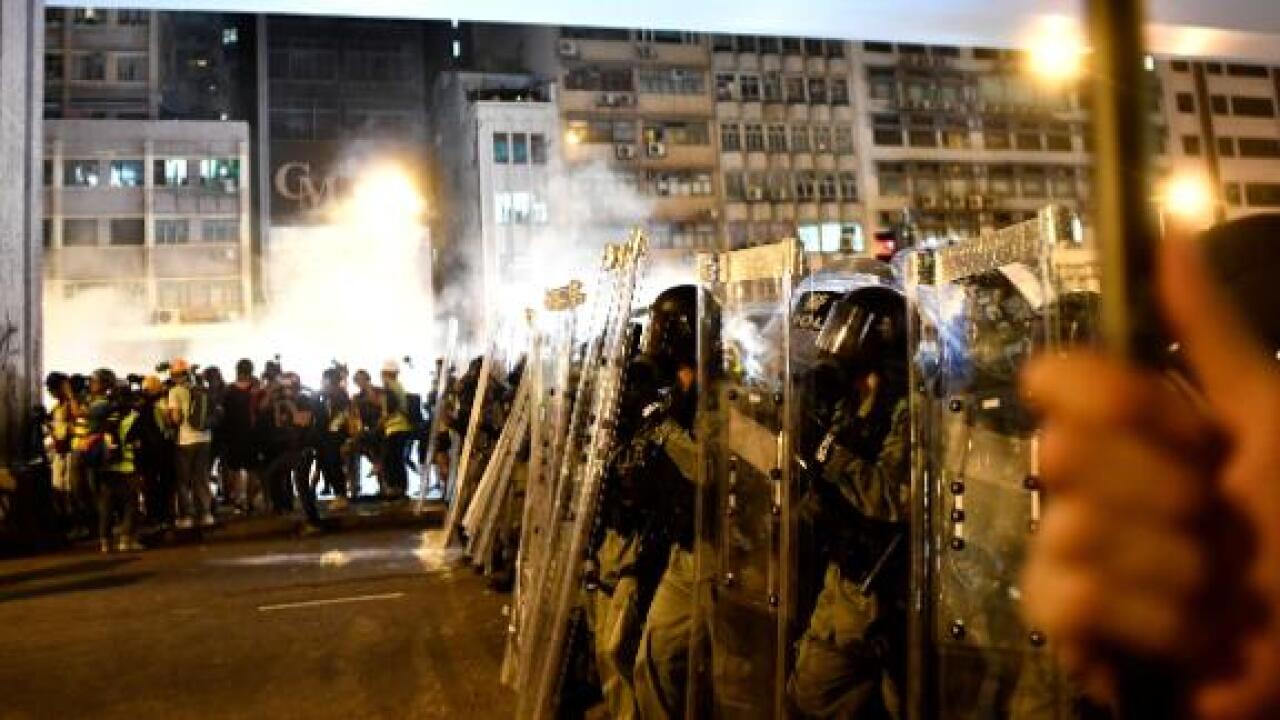 Hong Kong descended into scenes of chaos Sunday night, after riot police fired tear gas and rubber bullets at protesters, and a mob armed with batons attacked people in a metro station.

The unrest came after tens of thousands took to the street for the seventh consecutive weekend amid an ongoing political crisis over a now-suspended extradition bill.

Footage posted on social media showed a marauding gang of masked men, wearing white T-shirts, attacking people wearing black, the color of the protest, on the platform and inside train carriages at Yuen Long MTR station, in the north of the city — an about an hour from where the day’s protest had taken place.

Forty-five people were hospitalized following the violence in Yuen Long, with one person in critical condition, according to Hong Kong’s Information Services Department. Five people remain in serious condition.

The incident has raised fears that organized crime gangs, who are known to operate in the outer areas of the city, are becoming involved in the political crisis. In a statement Monday, police said they would not tolerate “violent behavior” and were actively following up the two incidents “in order to bring the offenders to justice.”

The violence in Yuen Long came as protesters and police faced off in the city’s Central and Sheung Wan districts.

Sunday’s demonstration had begun as a peaceful march, with organizers estimating that more than 400,000 people had joined the rally, while police said 138,000 took part. Protesters, many wearing black, chanted “Free Hong Kong!” as they thronged through the city.

But, later in the afternoon, thousands defied police orders and marched beyond the designated end point towards the Chinese government’s liaison office. Protesters spray-painted slogans on walls close to the building and defaced its emblem before retreating when faced with a growing police presence.

Intermittent skirmishes continued amid chants of “Liberate Hong Kong,” as the crowd headed to the city center. There riot police fired tear gas to disperse a large group of mostly young activists, who had charged police lines with metal barricades.

In a statement, the Hong Kong government said it “strongly condemns the protesters who blatantly challenged the national sovereignty by maliciously besieging and storming” the liaison office building.

The Civil Human Rights Front, which organized Sunday’s march, is demanding an independent investigation into what it says are unnecessarily brutal police tactics, as well as the release of those who were arrested during previous street clashes.

The protests were initially sparked by strong public opposition to a proposed extradition bill. Critics fear that the bill, which has since been suspended, would allow citizens to be sent across the border into mainland China, to face trial in a system with a 99% conviction rate and a history of political prosecutions. On June 18, Hong Kong’s Chief Executive Carrie Lam said the bill was “dead” and there was “no such plan” to reanimate it.

For protesters, however, that is not enough. They are calling for the complete and formal withdrawal of the bill, as well as for Lam’s resignation and other democratic reforms in the city, which is ruled under a “One Country, Two Systems” arrangement with mainland China.

Tammy Leung, who took part in a separate march of 4,000 social workers Sunday, calling for Lam to step down, said protesters were determined to keep marching. “Why we keep coming out? Because the government do not handle or respond to anything on what is happening,” said Leung.

On Friday night police raided a suspected bomb-making factory in an industrial area of the city.

Three men have been arrested in connection with the raid, in which 2 kilograms (4.4 pounds) of high-powered explosives, including triacetone triperoxide (TATP), and various weapons were uncovered. Leaflets linked to anti-extradition bill protests were also found on site.

Those who support the city’s beleaguered police force and government are also making their voices heard.

On Saturday, thousands of demonstrators gathered in support of the government and police at a scheduled rally in Tamar Park, in the city center, to “safeguard Hong Kong” from the so-called “violence” of anti-extradition protesters.

The city’s police force has come under increased scrutiny in recent weeks. Many in the city have accused the police of using excessive force during protests, and criticized tactics that have included the use of rubber bullets and tear gas.

One of the goals of Saturday’s pro-Beijing march was to voice support for the force, organizers said.

“Who gives us the rule of law in Hong Kong? Who gives us its confidence? It’s the Hong Kong police. They are doing a very good job,” David Lan, of the Friends of Hong Kong Association, said Friday, after handing over a large donation to the police welfare fund.