Romney responds to Trump’s ‘go back’ tweets at American congresswomen 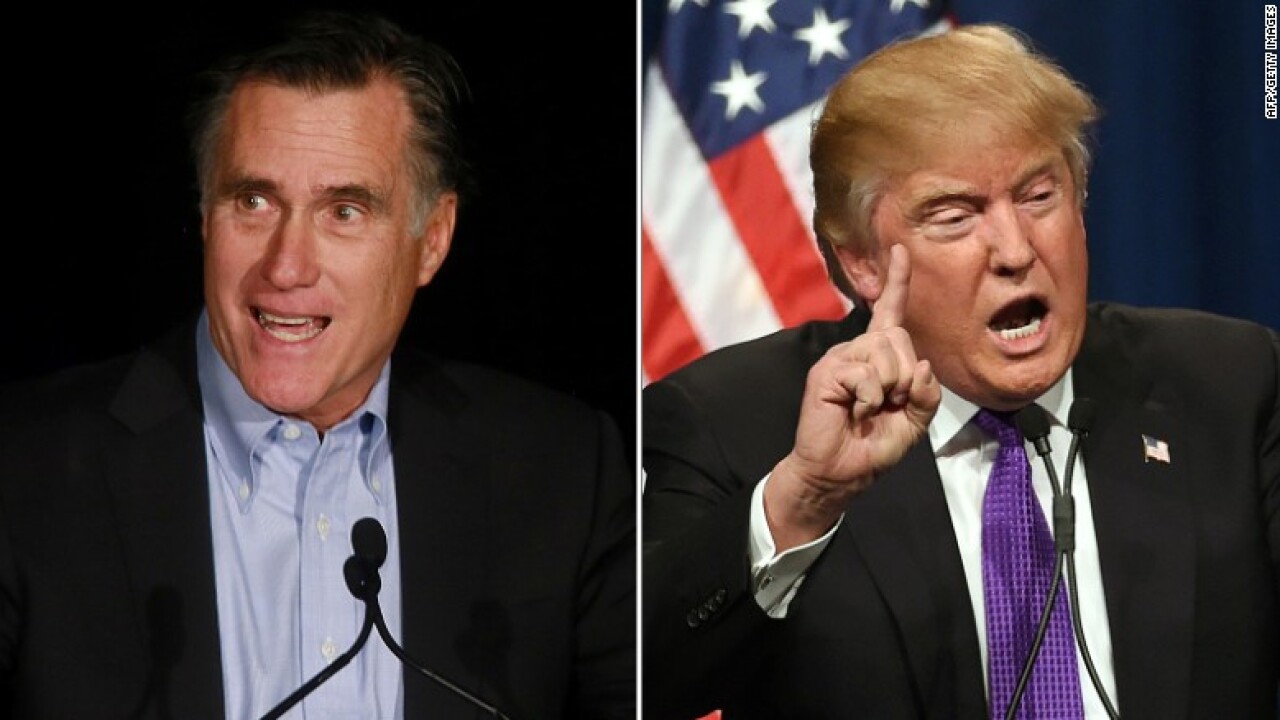 Mitt Romney released a statement Monday in response to President Trump's inflammatory tweet urging four minority American congresswomen to "go back where you came from.

"People can disagree over politics and policy, but telling American citizens to go back to where they came from is over the line," Romney said, in part. (Read his whole statement below.)

Trump did not name who he was attacking in Sunday's tirade but earlier this week he referenced New York Rep. Alexandria Ocasio-Cortez when the President was defending House Speaker Nancy Pelosi.

A group of Democrats, who are women of color and have been outspoken about Trump's immigration policies, last week condemned the conditions of border detention facilities. The group of women joining Ocasio-Cortez were Rashida Tlaib of Michigan, Ilhan Omar of Minnesota and Ayanna Pressley of Massachusetts.

Trump implied in the series of tweets that the congresswomen weren't born in America and sarcastically suggested, "they go back and help fix the totally broken and crime infested places from which they came."

Later Sunday, Ocasio-Cortez wrote on Twitter that the country she "come(s) from" and "swears to" is the US and suggested that Trump is "angry because you can't conceive of an America that includes us."

"You rely on a frightened America for your plunder," the New Yorker wrote in a tweet.

Ocasio-Cortez, Tlaib and Pressley are natural-born US citizens, while Omar was born in Somalia and immigrated to the US when she was young. Omar became a citizen in 2000 when she was 17 years old, according to the New York Times.

Trump's tweets come as interest in the conditions of detention centers housing migrants has risen sharply and raids to round up undocumented immigrants are being conducted Sunday by Immigration and Customs Enforcement officials in multiple major cities across the nation.

CNN has reached out to the White House for comment on who Trump was targeting in his tweets.

Omar, responding to the President's attacks on Sunday, threw punches at Trump in a pair of tweets, writing that "As Members of Congress, the only country we swear an oath to is the United States."

"Which is why we are fighting to protect it from the worst, most corrupt and inept president we have ever seen," Omar wrote, adding that Trump is "stoking white nationalism" because he is "angry that people like us are serving in Congress and fighting against your hate-filled agenda."

Tlaib and Pressley also hit back at Trump on Twitter, with Tlaib saying she is "fighting corruption" in the US "every day when I hold your (administration) accountable as a U.S. Congresswoman," and Pressley saying the tweets are "what racism looks like."

"WE are what democracy looks like. And we're not going anywhere. Except back to DC to fight for the families you marginalize and vilify everyday," Pressley wrote in a tweet.

Trump continued his attacks on the progressive House members Sunday evening, claiming they "speak so badly of our country." In a pair of tweets, he said he was sad to see Democrats sticking up for the House members, and that he looked forward to the 2020 election if they continue with this strategy.

The president’s comments were destructive, demeaning, and disunifying. The President of the United States has a unique and noble calling to unite the American people – of all different races, colors, and national origins. In that respect, the president failed badly. People can disagree over politics and policy, but telling American citizens to go back to where they came from is over the line.

Pelosi comes to defense of progressives

Pelosi jumped to the defense of the congresswomen and condemned Trump's language. "When ⁦‪@realDonaldTrump⁩ tells four American Congresswomen to go back to their countries, he reaffirms his plan to "Make America Great Again" has always been about making America white again," Pelosi tweeted on Sunday. "Our diversity is our strength and our unity is our power."

In a later tweet, Pelosi asked Trump to work with Congress for a "humane immigration policy" and to stop immigration raids.

On "Fox News Sunday," Luján told Chris Wallace, "That's a racist tweet. Telling people to go back where they came from? These are American citizens elected by voters in the United States of America to serve in one of the most distinguished bodies in the US House of Representatives."

Multiple 2020 democratic presidential hopefuls offered forceful rebukes of Trump's tweets Sunday, with some using the attacks to push their own campaign messages as inclusive alternatives to the President's rhetoric.

Democratic front-runner and former Vice President Joe Biden tweeted Sunday, "America's strength is and has always been rooted in our diversity. But President Trump continues to spew hateful rhetoric, sow division, and stoke racial tensions for his own political gain."

"Let's be clear: Racism and xenophobia have no place in America," he added.

South Bend, Indiana, Mayor Pete Buttigieg told reporters in Iowa Sunday "the idea of questioning somebody's belonging because they are questioning those in power -- that's something that has a long and dark history in this country," he said, telling a story of a time his father faced similar rhetoric.

"I remember an experience like that happening to my father, who came to this country, became a citizen, was passionate about this country, and was once heckled when he was speaking at a protest by somebody who told him to go home. And he told them 'I am home,' and he was."

Buttigieg added: "It is often those who are newest to this country who have such a vivid sense of what it means to be an American, because they chose to be American."

New York Sen. Kirsten Gillibrand told reporters at an event in Iowa that Trump is "racist" and that he was "demeaning female members of the House of Representatives based on the color of her skin and their cultural heritage," while Vermont Sen. Bernie Sanders wrote in a tweet that, "When I call the president a racist, this is what I'm talking about."

Andrew Yang, another 2020 Democratic hopeful, said in a tweet that, "Characterizing members of Congress as being from another country is part of the problem."

Beyond the 2020 field, Michigan Rep. Justin Amash, who announced earlier this month that he was leaving the Republican Party and is now an independent, also denounced the President's comments, writing in a tweet that they were "racist and disgusting."

Trump has routinely inflamed public debate and in turn rallied his base with comments about race.

Pelosi, a California Democrat, and this group of freshmen lawmakers have been embroiled in a dispute over the last couple weeks, although Pelosi called for unity recently among House Democrats.