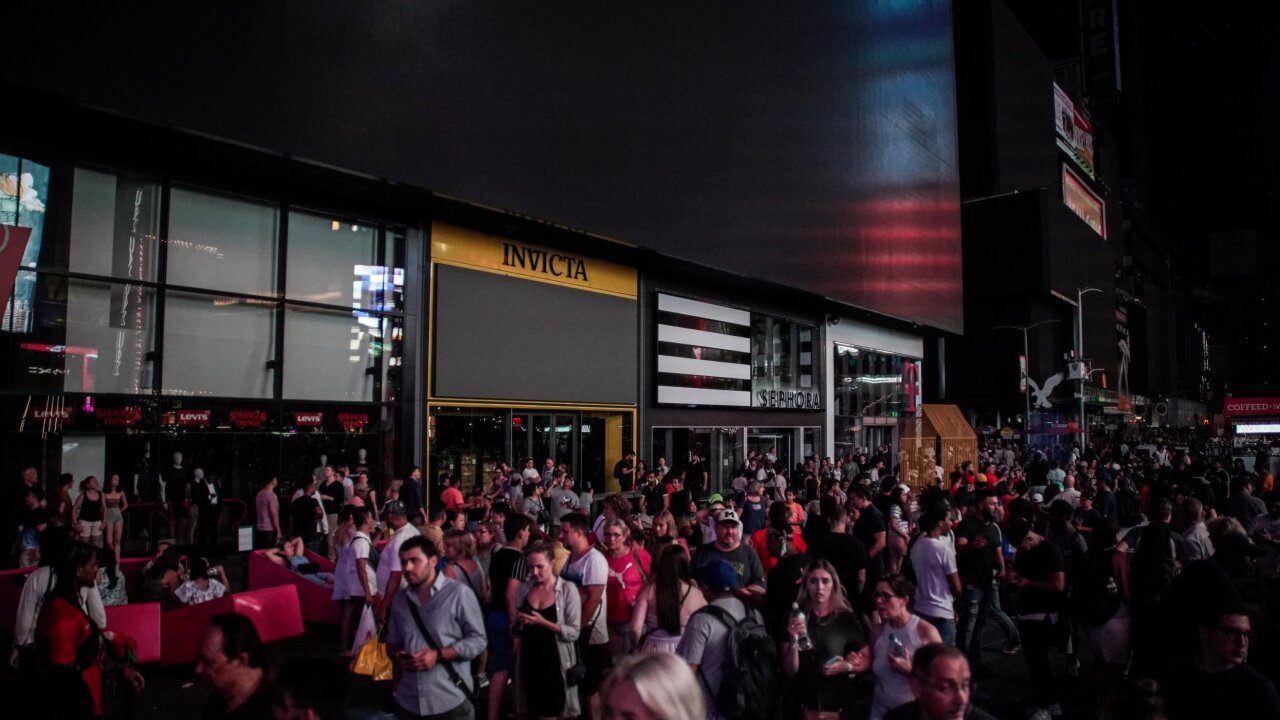 Power was fully restored in New York early Sunday after an outage left parts of the city in darkness for hours, leaving thousands trapped in subway cars and elevators, and people guiding traffic at intersections.

(CNN) — Power was fully restored in New York early Sunday after an outage left parts of the city in darkness for hours, leaving thousands trapped in subway cars and elevators, and people guiding traffic at intersections.

The outage started Saturday evening and the lights were back on shortly after midnight, officials said. It mostly affected midtown Manhattan and parts of the Upper West Side. No injuries were reported.

People spilled out into the streets as lights suddenly dimmed at Broadway shows and speakers fell silent at Jennifer Lopez’s concert. Even the flashing lights at the iconic Times Square went dark, leaving the area surrounded by the glow of cellphones taking photos of the surreal scene.

Lopez said she was disappointed she had to cancel her concert on her second night at Madison Square Garden. She rescheduled it for Monday night.

“I’m devastated and heartbroken right now,” she said. “I just don’t even know what to say. … Obviously it was beyond all our control.”

When the lights flicked back on, crowds erupted into cheers in some places.

At the height of the outage, 72,000 customers were in the dark, utility company Con Edison said. It had given a preliminary number of 73,000 — but lowered it early Sunday. Power started trickling back on just before 10 p.m., it said. Gov. Andrew Cuomo asked people to stay indoors despite the full restoration.

“While power has been restored, there are still some traffic signals that are out, so we would not encourage New Yorkers to go out if you don’t have to go out,” he said.

Officials have released varying descriptions about what led to the outage. Mayor Bill de Blasio, who was returning to the city after a presidential campaign stop in Iowa, said the outage appeared to be the result of a mechanical problem.

“This appears to be something that just went wrong in the way that they transmit power from one part of the city to another,” he said.

Cuomo told CNN there was a malfunction at an electrical substation, and that the malfunction temporarily knocked out other substations.

Con Edison described the problem as an “equipment failure” and said the cause of that failure will be investigated. CEO John McAvoy said his company divides the electric system into networks that are roughly equivalent to neighborhoods, and that Saturday’s problem interrupted power to six networks.

“We expedited the recovery, performed an initial assessment of what was the most likely cause, isolated that equipment, inspected the other equipment to identify any obvious abnormalities,” McAvoy said.

Cuomo described a power outage of this magnitude as unacceptable, and said he’s called for a full investigation into the cause. He applauded residents for keeping their cool.

“This could have been much worse. When you’re talking about a city like New York with a significant piece of the city, basically suffering a blackout, that could be a very chaotic situation. We saw the exact opposite, actually. We saw New Yorkers at their best.”

The Brooklyn dancer guided cars, ambulances and pedestrians through a busy, three-way intersection near Lincoln Center on Manhattan’s Upper West Side.

“I know how tricky it is when it comes to that intersection and I just saw in my mind car accidents, people getting hit, people screaming,” she said. “So I felt like I should have just tried.”

Others spill out onto the streets

The outage had a widespread effect on the New York subway system. The Metropolitan Transportation Authority warned people to stay away from underground stations and consider taking the bus.

Several Broadway and off-Broadway shows said they were canceling performances.

Cast members from Broadway musical “Come From Away” held an impromptu performance outside their darkened theater. So did some Carnegie Hall performers.

“After being trapped on the F for an hour because of the power outage, I emerged to see dark restaurants and traffic lights, civilians directing traffic and an evacuated Carnegie Hall concert happening in the street,” Briallen Hopper tweeted.

The outage came 42 years to the day after an extensive blackout left much of the city in darkness for 25 hours, leading to a crime rampage.