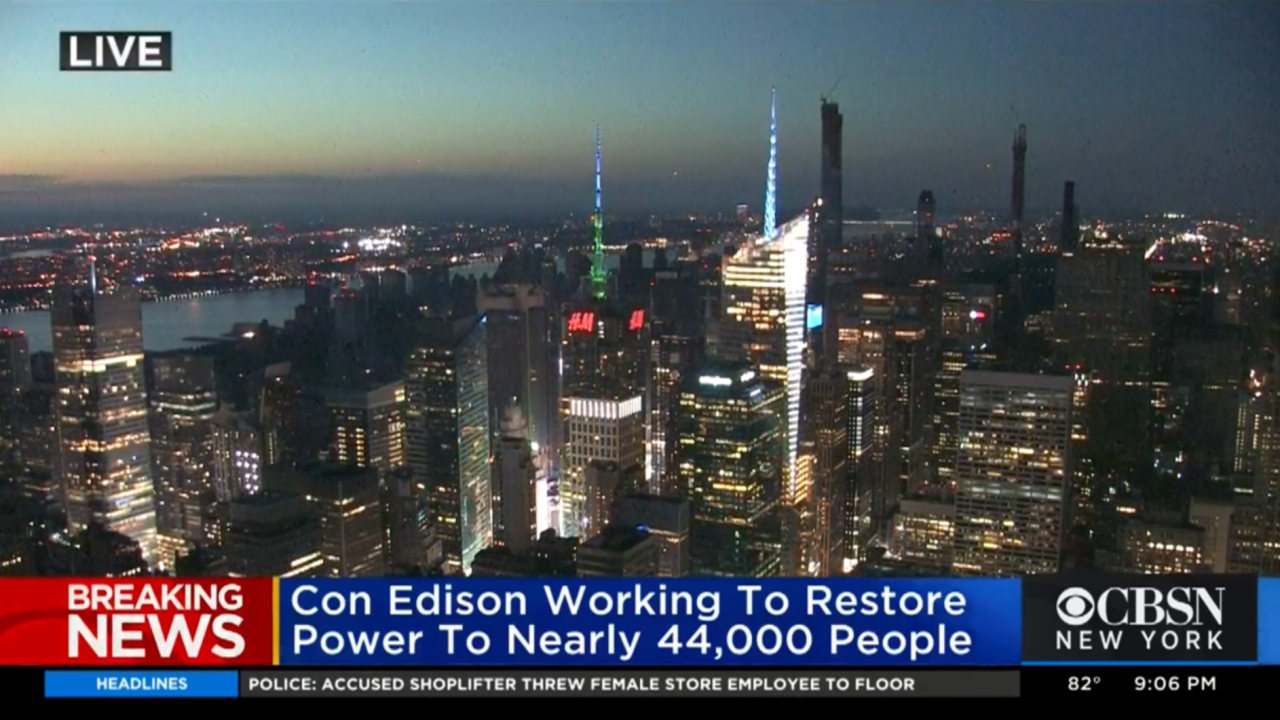 Tens of thousands of people were without power in Manhattan on Saturday evening, ConEdison said.

There were 61,000 customers without power in New York, most of them in Midtown Manhattan and the Upper West Side, the utility company said.

The power outage sent people into intersections to direct traffic, brought at least one troupe from a canceled Broadway show out to perform for fans on a crowded sidewalk, and prompted giddy tourists and locals to point smart phones at darkened neon signs in Times Square and other places.

It also temporarily trapped people on trains and in elevators.

Mayor Bill de Blasio, who was campaigning for president in Iowa, said it appears the outage was the result of a mechanical problem in the electrical grid.

“This appears to be something that just went wrong in the way that they transmit power from one part of the city to another,” he told CNN. “It sounds like it is addressable in a reasonable amount of time.”

LIVE UPDATES ON THE POWER OUTAGE

The city’s fire department was responding to numerous transformer fires, the first of which occurred in Manhattan on West 64th Street and West End Avenue, officials said.

Several Broadway and off-Broadway shows said they were canceling performances, according to tweets aggregated by The Broadway League.

Firefighters were also responding to people trapped in elevators and subway cars, and they are operating all over Manhattan’s West Side from streets in the 40s to the 60s, according to an FDNY spokesman.

Some of the cast from “Come From Away” came outside as people awaited news of whether the show would be call off and they sang a number.

The outage was having a widespread effect on the New York subway system, which was experiencing power outages in its stations, the agency managing the trains said.

“Subway service remains significantly disrupted across the system, although there is limited service on the 1/2/3 and 4/5/6 lines,” the Metropolitan Transportation Authority tweeted.

The MTA advised people to stay away from underground stations.

The outages were affecting “multiple lines,” the MTA said, so trains were using a “local track.”

The MTA told people to consider taking the bus.

The lack of power was a major issue on the streets and in buildings, too.

A CNN producer on the Upper West Side said he was at a movie when the theater went dark at about 7 p.m. He went outside and saw traffic and street lights were out. Traffic was jamming up in intersections but it wasn’t gridlocked, he said.

Twitter user Sahid Abraham posted a photo from Times Square that showed some of the famous electronic billboards dark.

Another user posted a photo showing a man at 66th Street and Broadway directing traffic.

A woman jumped into a nearby intersection.

She said she learned her traffic directing skills from her father, a former police officer who walked the beat in Coney Island.

“I know how tricky it is when it comes to that intersection and I just saw in my mind car accidents people getting hit, people screaming,” she said. “So I felt like I should have just tried.”

On Columbus Avenue, outside Fordham University’s campus, the scope of the outage was becoming more apparent as daylight waned. There were very few lights in building windows and brightly lit food carts were some of the few sources of light beyond vehicle headlights.

The outages come 42 years to the day of an extensive blackout that affected much of the city.