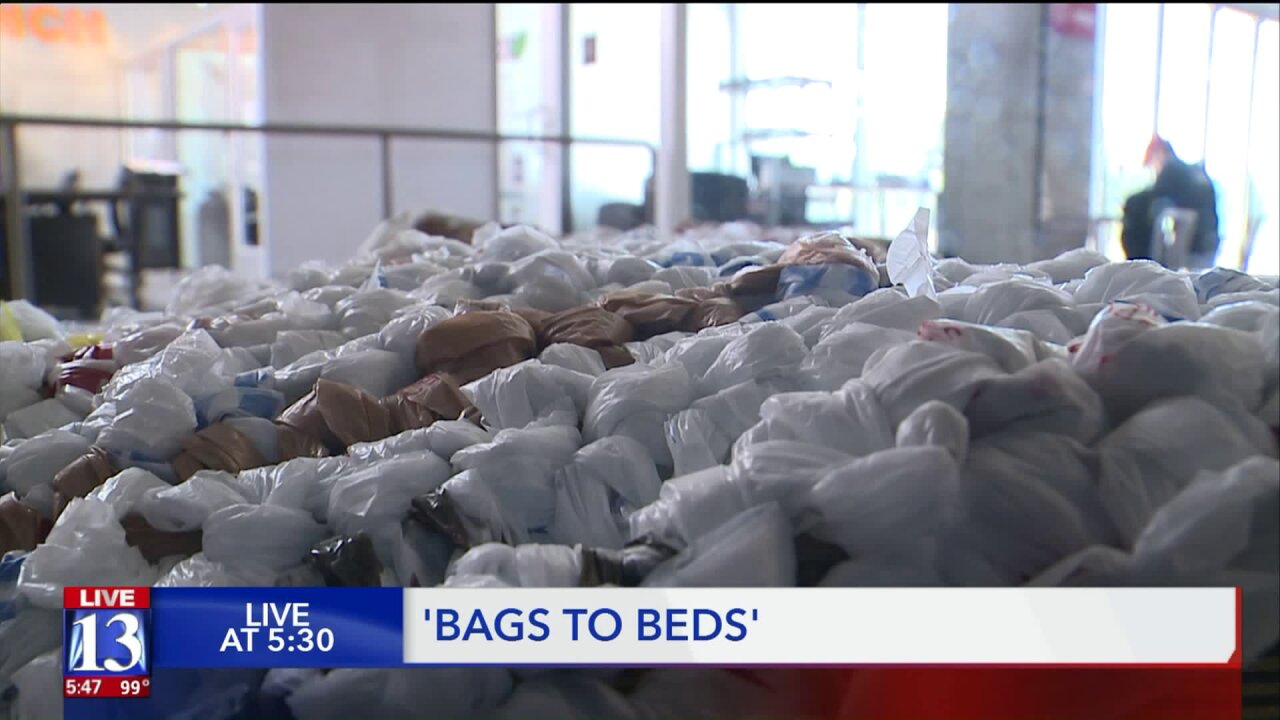 SALT LAKE CITY — With the hot summer weather, most of us aren’t thinking about keeping warm this winter — but a local nonprofit is hard at work to help keep the local homeless population warm during the upcoming winter months.

Bags to Beds was started by Kaitlin McLean as a University of Utah student in 2017.

She first learned how to make yarn out of plastic bags after seeing a video online.

“I thought it was a fascinating idea. A great way to reuse something that most of the time is being thrown away, especially in Utah,” she said.

That same week, she happened to read an article about how many homeless people freeze to death in Utah winters.

“After reading about that, I decided it might be a good idea to combine the two,” McLean said.

She came up with the concept of crocheting the plastic yarn to create beds that homeless people could put on the ground. Around the same time in the winter of 2017, Utah Athletics was looking for a one-time service project.

“I taught about 35 student-athletes from all of the different athletic teams here," McLean said. "Luckily, we got some news coverage from that one service event and it just kind of blew up from there."

It’s really easy to make the plastic yarn — or "plarn," as McLean calls it.

Once you have a ball of "plarn," do a simple crochet stitch to create a 5-by-6 foot blanket.

“Last winter, right before the cold season hit in October, we handed out about 50 beds at one time at Project Homeless Connect," McLean said. "The reception there was amazing. We took 50 beds, we were supposed to be there for six hours and we ran out in an hour."

Thanks to media coverage and $5,000 raised through a GoFundMe page, Bags to Beds is picking up volunteers around the country.

“We have chapters in a few different cities. One of the first ones was in Paige, Arizona,” McLean said.

Stitching together a world-wide effort that is warming the souls of those in need.

“The feedback we receive is entirely why we do this. I love reducing waste. I love the potential of helping people," McLean said. "But when we hear from people how much we’ve impacted them or how valued they feel, that makes all of the time and effort completely worth it."

To learn more about Bags to Beds and how to get involved, visit bagstobeds.org or their Facebook page.