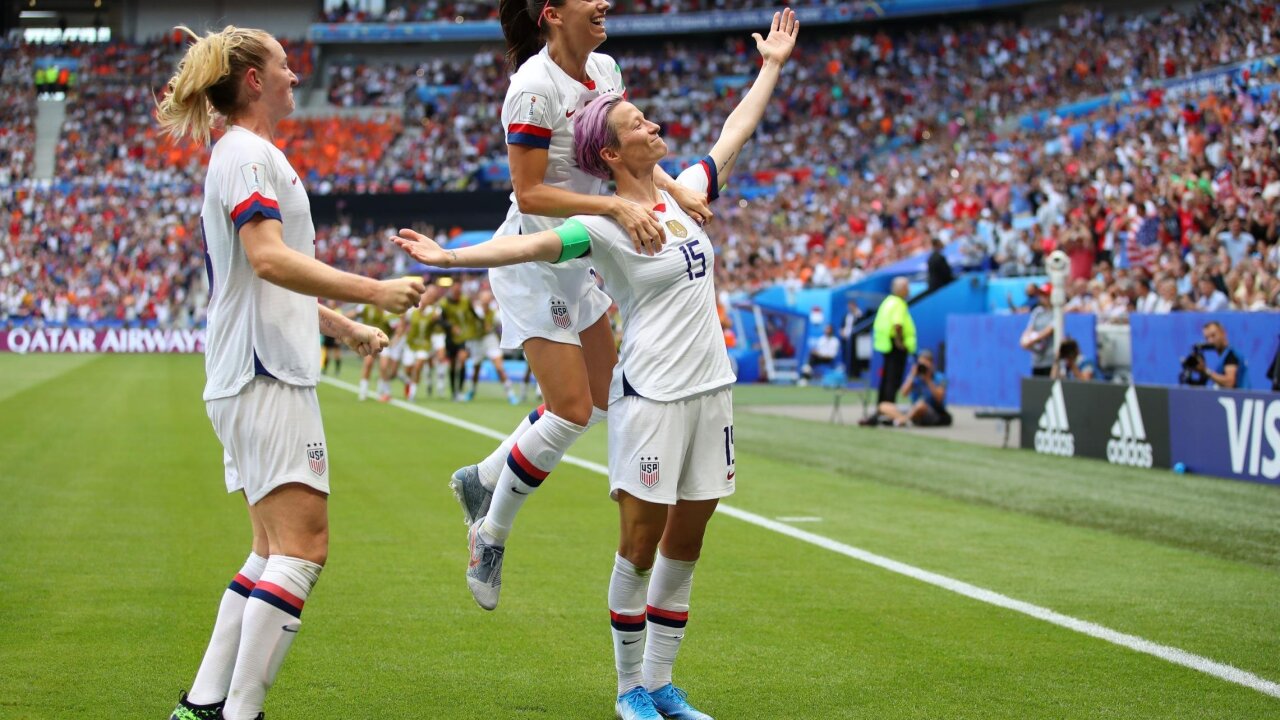 The US Women’s National Soccer Team captured a record-extending fourth World Cup Sunday with a 2-0 win over the Netherlands in the championship games.

The U.S. Women’s National Team won the 2019 Women’s World Cup Sunday afternoon in Lyon, France with a comfortable 2-0 win over the Netherlands.

Competing in its first World Cup final, few gave the Dutch hope against the defending champion.

The Netherlands held on for over an hour, but two goals within eight minutes sealed the underdog’s fate.

In a tournament where she has transcended her sport, Megan Rapinoe coolly drilled home a penalty before a Rose Lavelle thunderbolt made sure of a second successive title, and a fourth in eight editions.

Minutes after Rapinoe had given her team the lead, Lavelle gathered the ball in midfield and surged forward, which has been a familiar sight here in France. Collecting it in the center circle, the 24-year-old glided forwards, her mastery of the ball at pace making it impossible for her opponents to thwart her. With a swivel of the hips, she evaded two oncoming Dutch defenders before lazering it into the bottom-right corner.

Much has been written during this tournament about the European teams in rapid pursuit of the USWNT, posing a threat to a soccer dynasty.

That it was both Lavelle and Rapinoe, representing the team’s youth and experience respectively, who scored was a perfect way to illustrate that the US possess the personnel to see off challengers for some time to come.

Leading the chase are those European countries whose men’s national teams have traditionally been superpowers of the beautiful game.

The Dutch, English and French football federations have started to invest heavily in women’s football. But, in France at least, all have been vanquished. Thailand, Chile, Sweden, Spain, France, England and now the Netherlands have been swept aside by a team now unbeaten in 17 World Cup matches.

The Netherlands soaked up the US pressure in the first half. There were white shirts coming at them from every direction, aiming crosses from wide, from deep, attempting cute through-balls to catch the first-time finalists off their guard.

Those in orange needed to summon up the concentration levels of a chess grand master, but that’s what it’s like facing a team with an unceasing desire to win. They are always in motion; keeping possession, positioning themselves high up the pitch, never resting. Opponents are left to backpedal, to organize and resist when under intense stress.

And then there is the predominantly American crowd raising the decibels; moving towards the edge of their seats in anticipation of that killer through ball, roaring at every shot that seems to be flying towards goal, making it impossible to forget that this is a match like no other. Grand masters, at least, have the privilege of focusing in silence.

In such circumstances the pulse quickens, the mind whirrs. The grandest of sporting stages are always as much a mental battle as physical.

That the Netherlands withstood the US until the hour mark was admirable. It is the only team in this tournament which the USWNT has been unable to breach within the opening 12 minutes.

Much of the credit will be heaped on the acrobatic Dutch goalkeeper Sari van Veenendaal. First, she saved a Julie Ertz volley, then the woodwork assisted her gather of the first of two Alex Morgan attempts. It was pure instinct which saw her deny Morgan for the second time before the break.

Had the Netherlands been able to maintain its composure in the final third then history may have been pointing to this match as the one where the emerging forces knocked the USWNT off its perch.

Had Alyssa Naeher not sprinted off her line at the sight of Lineth Beerensteyn charging towards goal the Netherlands could have gone ahead. It was a moment which highlighted the US defense’s occasional vulnerability to be cut open with a clever pass.

READ: Dutch rise was decades in the making

After the break, when French referee Stephanie Frappart opted to bring VAR into play, showing Stefanie van der Gragt to have felled Morgan, it felt almost certain that the penalty would be awarded.

Rapinoe stepped up to score her sixth goal of the tournament and celebrated with arms outstretched in a pose which became iconic when she celebrated in the same way in scoring against France just days after irking US President Donald Trump.

Rapinoe’s teammates engulfed her near the corner flag, with even the substitutes sprinting half the length of the pitch to join the celebrations. Given the doggedness of Dutch resistance, the relief of the US team was tangible.

The penalty secured her the Golden Boot, beating teammate Morgan — who also ended the tournament with six goals and three assists — courtesy of minutes per goal.

It was only after going 1-0 down that the Netherlands attack, its most potent weapon, seemed to feel at ease in its surroundings, but teams who fall behind to the USWNT rarely recover. And so it proved as Lavelle, who watched the 2015 final in a pizza shop, struck quickly to double the advantage.

Were it not for Van Veenendaal the score could have been higher. The 29-year-old stopped Morgan, Tobin Heath and Crystal Dunn from making it three.