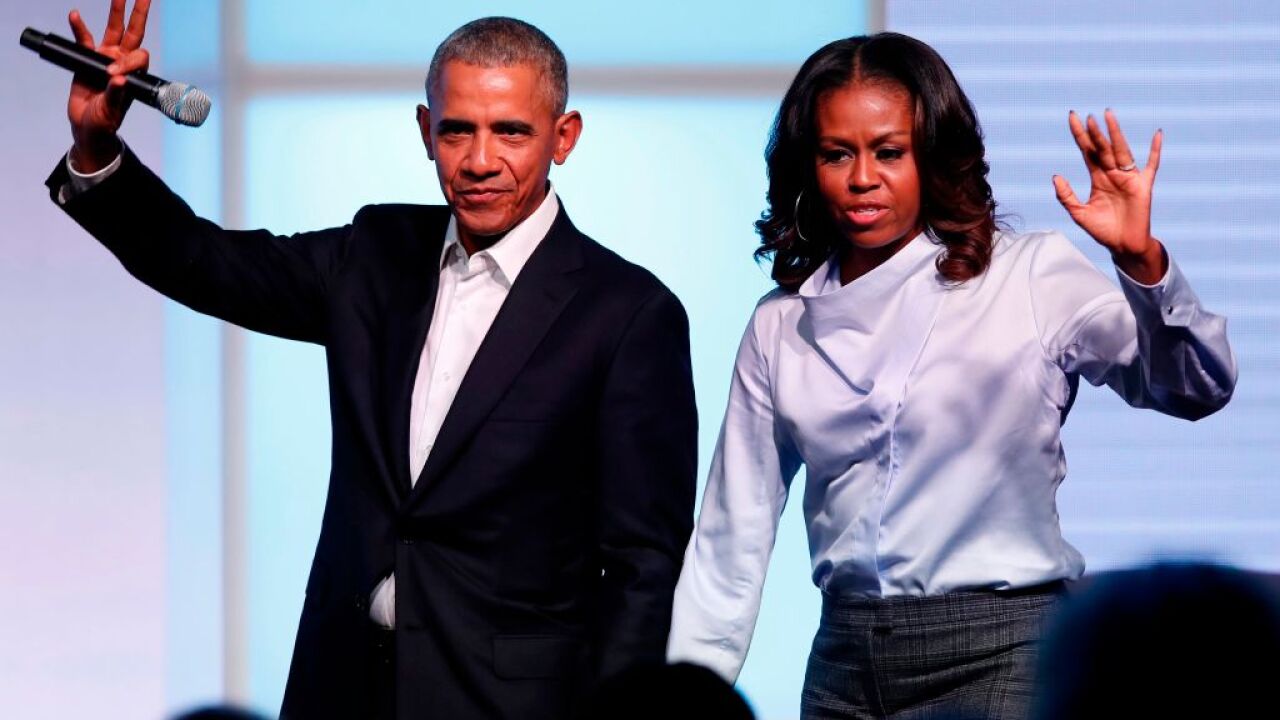 Michelle Obama on Saturday recalled her life as a mother, wife and the first lady of the United States while speaking with CBS “This Morning” co-host Gayle King before an audience gathered at the Essence Festival in New Orleans.

The wide-ranging interview saw Obama share broadly her frustrations with the Trump administration and the current political climate, but also speak in deeply personal terms about her children, husband and the “emotional time” around leaving the White House after Barack Obama’s eight years in office.

The former first lady was frank about how she felt looking out at the crowd during Donald Trump’s inauguration, the way her and former President Barack Obama are “rediscovering each other” and what it was like for her daughters, Malia and Sasha, to grow up in the White House.

Here are some of Michelle Obama’s most notable quotes from the interview:

On marriage: “Marriage is all nice and cute but then kids show up and they take up all the oxygen in the land,” she said. “That’s why they make the babies cute because you would leave them at the Post Office.”

She later added: “My husband is my teammate and if we are going to win this game together, he has to be strong and he has to be OK with me being strong.”

On the role men played in her life: “My father and my brother had the greatest impact on my self-esteem because I grew up in a household with men who loved me and respected me very early on, who told me how beautiful I was, who treated me as an equal,” she said. “So even at an early age because I had a father and a brother and the men in my life who didn’t hurt me, who took care of me, the bar for what I expected for myself was set by the men in my life.”

On the extra difficulties for Sasha and Malia: “Imagine having Malia and Sasha come to your house for a sleepover. This is the call: It’s like, ‘Hello. OK, we’re going to need your Social Security number, we’re going to need your date of birth. There are going to be men coming to sweep your house, if you have guns and drugs, just tell them yes because they are going to find them anyway. Don’t lie, they’re not going to take them, they just need to know where they are. And, uh, thank you for having Malia and Sasha over. Oh and by the way, there is going to be a man with a gun sitting outside all night,” she said. “If you let him use the bathroom, that would be nice.'”

On being an empty-nester: “This is the beauty of finding a partner you really love and respect — because after all the highs and lows, the ups and downs we’ve been through, we have each other, which makes the journey worth it,” she said, adding that her and Barack Obama are “rediscovering each other” now.

On campaigning alongside her husband: “For a minute there, I was an angry black woman who was emasculating her husband. As I got more popular, that’s when people of all sides — Democrats and Republicans — tried to take me out by the knees and the best way to do it was to focus on the one thing people were afraid of: the strength of a black woman,” she said.

On defining her role: “I would have to earn my grace and I knew I would have to quickly define myself and I want all young girls out there to know — we all struggle with that, people of color, working class folks, women of color — people try to define us in a negative way before we get a chance to get out there and tell our own stories.”

On the night before: “The truth is, on that day I was moving my children out of the only house they had really grown up in,” she said. “I think that gets lost on people.”

On the emotional morning: “So anyway, the girls didn’t get up, I’m like get up and get out of here, and they’re all crying and they have their teddy bears and they’re moving slow and I’m like, you’ve got to get up and get out of this house. And I don’t know where these kids are going, but they had to get up and out of that house. So you’ve got tears and I’m pushing people out of freight elevators and my kids are crying — I don’t know where they going — all of that was happening and the staff was crying.”

On the crowd: “So look around of a crowd that was not reflective of the country and I had to sit in that audience, one of a handful of people of color, all that I had sort of held on to for eight years watching my husband get raked over the coals feeling like we had to do everything perfectly so that by the time I got on that plane it was a release of eight years of having to show up as we all know we have to do not only perfectly,” she said, “but a little bit better than perfect to even be considered equal.”

On ‘going high:’ “It has to be true — you know, look, that’s the one thing people ask me about, in this climate, how do you find it in yourself to go high and here’s the thing, going high is a long-term strategy — because the truth is, going high is about thinking about trying to really get to the real answer, because a lot of time the low answer is our immediate instinct. It’s just, I’m mad, I want to punch you in the face, but it doesn’t solve anything.”

On her guiding principles: “And if we’re thinking about what the agenda is, which is getting to a place where we all live in a country where we’re proud to pass on to our kids, going high is the only way we get there. It’s our patience, our tolerance, it’s our belief in honesty and truth, it’s our belief in hard work,” she said. “It’s not about getting somebody back, it’s not about the immediate clapback. The immediate clapback is just for your own selfish purpose right there in the moment and rarely does it solve anything.”

On where the race is now: “I mean that’s one of the things that we learned in the campaign. It is early,” she said. “It’s like trying to figure out who is going to win the World Series on the first seven games, I mean that’s where we are right now. It is so early and things will change.”

On not endorsing a candidate in the primary: “The general election is so important that we have to get behind whoever comes out of that primary, so we’re watching everyone, we’re supporting everyone, we’re giving advice to whoever seeks it,” she said.

On the Biden-Harris spat over race and busing: “I’ve been doing this rodeo far too long,” she said to a laughing crowd. “It’s like — no comments.”