‘We are blessed’: Herriman family of 9 thanks community after losing home in fire 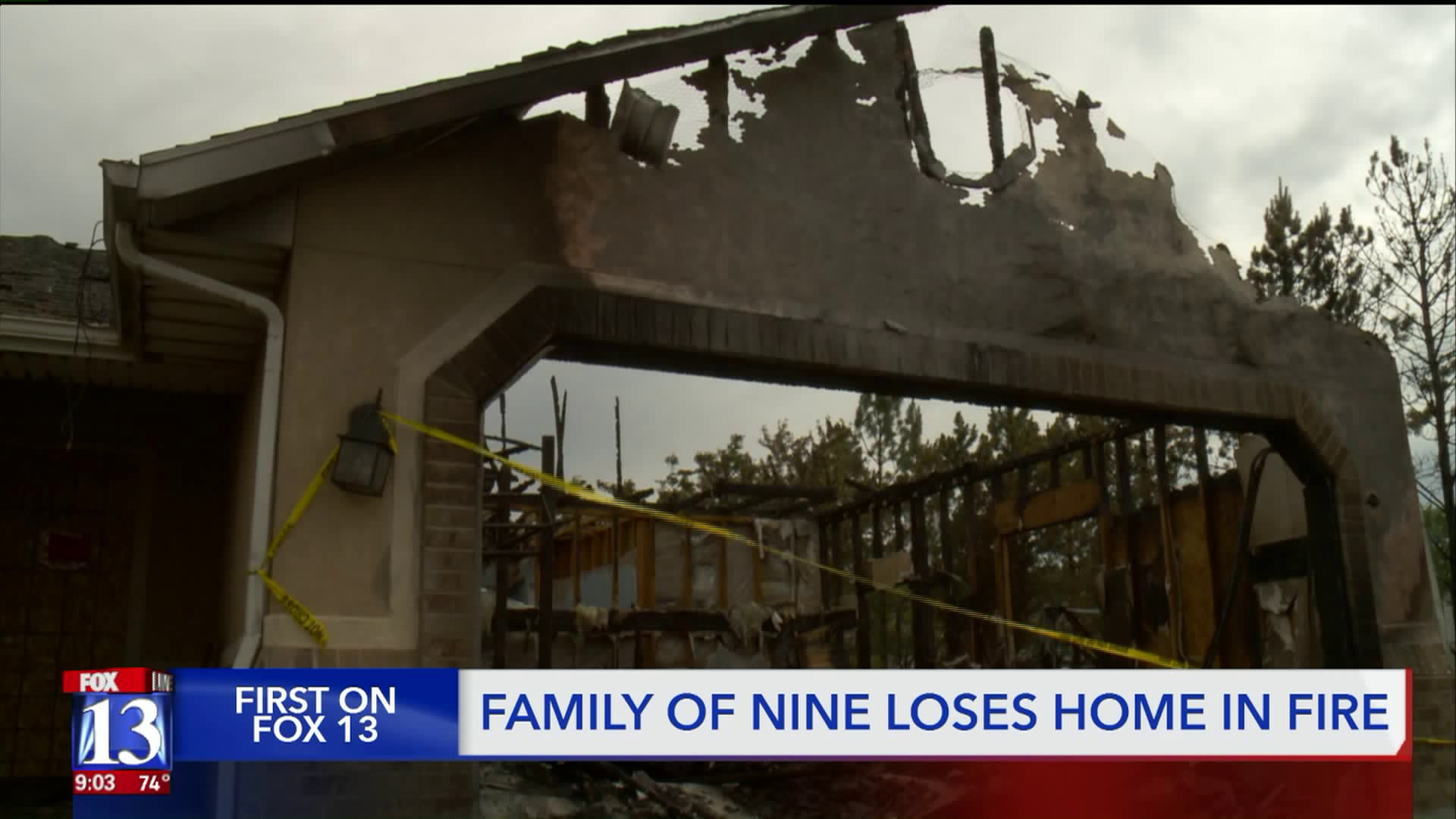 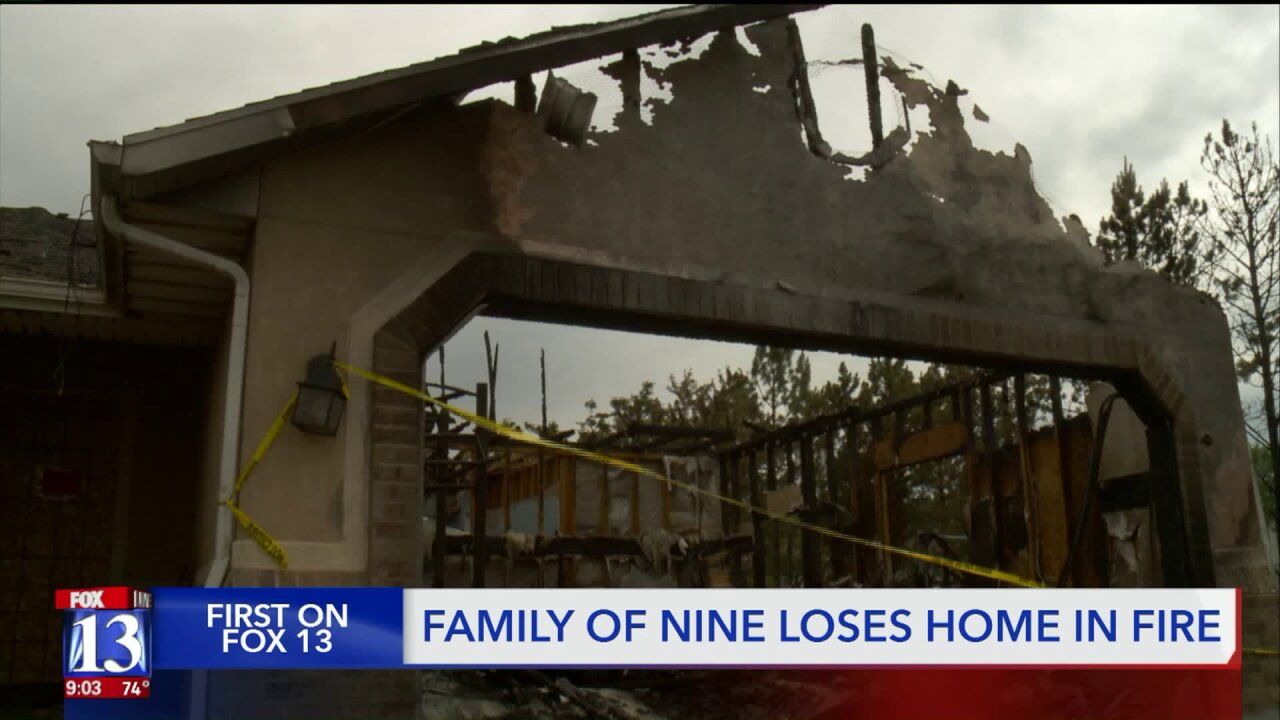 HERRIMAN, Utah – Returning to their burned up home a day after a fire rendered it uninhabitable, a family of nine is thanking the community for their generosity and support.

“I just wonder how long it will take to get the smoke smell gone,” Jessica Farnsworth laughed as she stood next to her husband, Jeremy.

Walking around the charred remains of their Herriman home, you wouldn’t guess Jeremy and Jessica Farnsworth would be in such good spirits.

“Yup, it is overcooked,” Jeremy laughed.

“I told all of my friends, if you have not bought me a present yet, I will be providing a list of things that I would like for my birthday,” Jessica joked.

Just one day ago, the trees near their home caught fire. It quickly spread to a nearby shed, the heat eventually igniting their home.

“It was unbelievably fast,” Jeremy said. “The whole roof was basically done in less than ten minutes, it was gone.”

Jeremy said he was outside with some of their seven children while Jessica was inside with the rest.

“One of my kids ran around and said one of the trees was on fire, and that just started us running around in panic,” Jeremy said.

Jeremy said they immediately got everyone out of the house and started to do what they could to stop the fire from spreading.

“We were trying to run hoses to stop things from spreading, but there was little we could do,” Jeremy said.

Unified Fire Authority had more than 40 people on the ground within minutes, but the fire and water damage destroyed most of the Farnsworths' belongings.

“That Honda motorcycle!” Jessica gasped upon realizing what all burned up in the shed. “Oh my gosh, that was my great uncle's.”

Their home is now uninhabitable, leaving them, their seven children (ranging in age from 7 months to 11 years old), two rabbits and a dog without a home.

“This is one of those things where we don’t get to pick our trials,” Jeremy said. “I’m sure this is something we’ll look back at and say, ‘Man that was such an awesome growth experience.’”

Now in the burned aftermath, they aren’t sad.

“It’s just stuff in the end, what are you going to do? I have my family, that’s what makes a home. It’s just stuff,” Jessica said.

Instead, they feel blessed.

“We’ve had nonstop people, people that we don’t even know,” Jessica paused for a moment, overwhelmed with emotion. “We just keep having people offering, ‘What can we do, what can we do.’”

The Farnsworths believe this fire brought the community together. While it was happening, strangers and friends worked to dry off pictures and sentimental things that were salvaged, others rushed over to try and help put the fire out.

“We didn’t leave here until 10 o’clock because people kept stopping by and giving us hugs, giving us gift cards and just handing us cash, saying, ‘We love you, tell us what you need, we’re here for you,’” Jessica said.

“They’re just the nicest, kindest people,” said their neighbor Dante, who organized a GoFundMe page for them. “They would never ask for anything themselves.”

Jessica said they’ve even received diapers, wipes and food for their baby, as well as blankets, pillows and pajamas for the kids.

“I’ve had offers of beds, of tables, of chairs, of couches, I can’t keep up with the response,” Jessica said.

Each neighbor, hug and donation brings more support than the couple could have ever imagined.

“Even if they don’t know us, they know this is sad," Jessica said. "And then once they find out you have seven kids ... they think it’s even sadder. But it’s just the blessings that we’re getting — it’s amazing."

It’s that support that they believe is turning their tragedy into triumph.

“It just tells me that there are so many good people in this world, and I think we forget that with all of the bad things that happened,” Jessica said. “Yeah, my house burned down, but that shouldn’t be the story — the story should be about all of these people that are helping us.”

“We’ll be back and we’ll rebuild, because there’s no better place to be than right here,” she said with a smile.

The Farnsworths do not know how the fire started. Unified Fire Authority is investigating.

A fundraising page that a neighbor set up for the family can be found here.