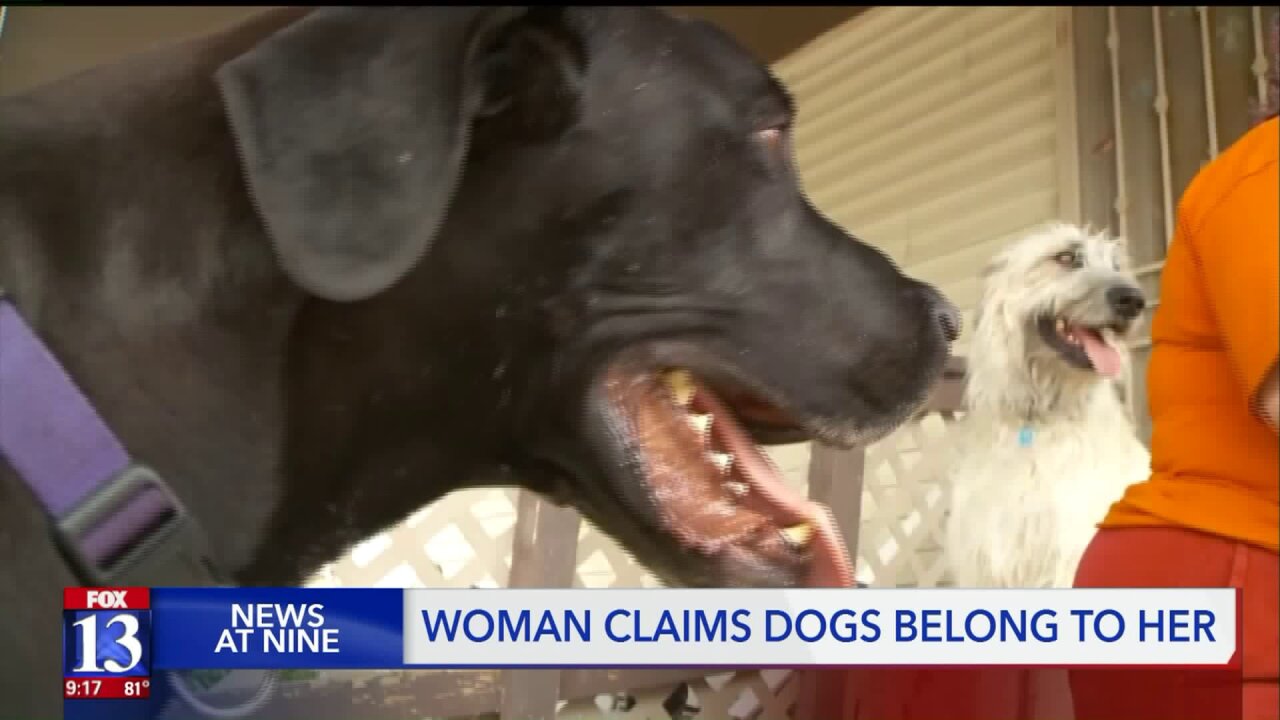 MAGNA, Utah — A Magna woman who lost her dogs has a cautionary tale for anyone who finds dogs and posts on social media, trying to do a good deed by looking for the owners of the animals.

Two Great Danes belonging to Theresa Cordeiro-Grimes ended up in the wrong hands after they escaped from her yard last week.

6-year old gentle giants Kelson and Hubie are her babies.

“Alright boo boos, come on!” She said to her dogs, as they trotted out the door on Tuesday.

“They are a safety measure, as well as my companions,” Theresa said. “And, they just mean everything to me.”

Last week, she said the pair escaped through a small hole in the fence after they got spooked during a storm.

A woman in West Valley found the dogs, and a post on social media was made right away to look for the owners. The woman who found the dogs said a woman texted her a couple hours later, saying the dogs were hers.

It wasn’t Theresa, but a woman who said her name was Ashlee.

“Some woman in West Jordan called her, and claimed that they were her dogs,” Theresa said.

The West Valley woman gave Fox 13 her text message exchange with Ashlee, in which Ashlee answers questions about the dogs including what they look like and the sex of the dogs.

She said the dogs were named Mickey and Lilo.

“They’re my babies,” Ashlee writes, at one point.

The woman who found Kelson and Hubie said she was going to call animal control, but Ashlee seemed like she was the owner.

Ashlee came to pick up the dogs from the woman’s house the next day, the woman said.

Theresa said her friends and neighbors saw the post on social media, and reached out to the West Valley woman who found the dogs. By then, Ashlee had already come to pick them up.

That’s when everyone connected the dots and realized the wrong person claimed Kelson and Hubie.

“I was terrified,” Theresa. “Hubie, the black Dane, is my late husband's dog, and it really upset me a lot that I wasn't able to keep my husband's dog safe from something like this.”

Unified Police discovered that the woman’s name was not ‘Ashlee.’ They found out her actual identity, and also found out that the woman had taken the dogs to see if they were microchipped.

“She says that she thought they belonged to her friend. But then found out they didn't belong to her friend, but still did not return those dogs,” Sgt. Gray said. “So, we have currently screened charges against this individual for theft by deception.”

The district attorney will decide whether or not to file the theft by deception charge against the woman.

It’s best to call animal control and let them handle it, Sgt. Gray explained, because animal control will make sure the dog is returned to the rightful owners.

Theresa finally reunited with Kelson and Hubie, after she said the woman told police that she brought the dogs back to West Valley and dumped them in the neighborhood where they were originally found.

Theresa and her friends searched the neighborhood, and came across the dogs.

“It was so much relief,” Theresa said, or her reaction to seeing them again.

A happy reunion, with her babies back home.