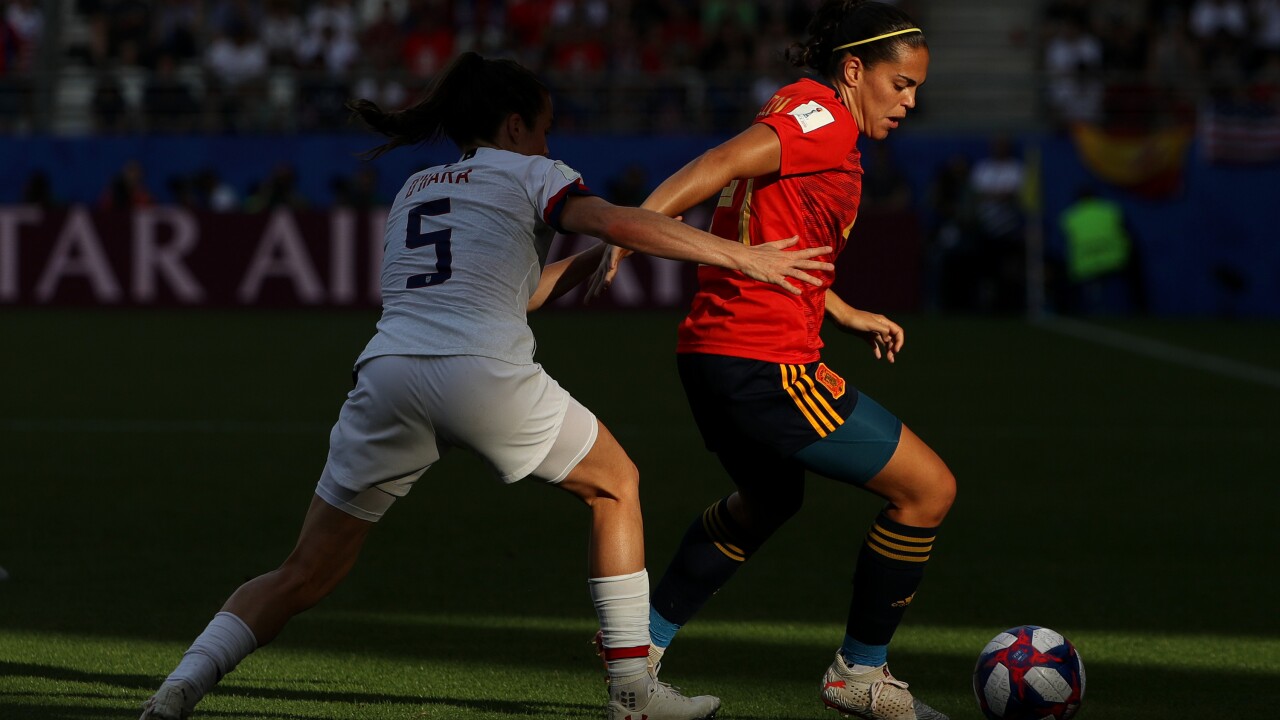 Andrea Falcon of Spain is challenged by Kelley O’hara of the USA during the 2019 FIFA Women’s World Cup France Round Of 16 match between Spain and USA at Stade Auguste Delaune on June 24, 2019 in Reims, France. (Photo by Robert Cianflone/Getty Images)

It wasn’t easy, and at times there was doubt, but defending champion the US can look ahead to a mouthwatering quarterfinal clash against host France after a 2-1 win over a resolute Spain.

In the US’ toughest challenge at the Women’s World Cup so far, two Megan Rapinoe penalties, one in each half, secured progress to the last eight.

When Spain conceded a fifth-minute penalty — Maria Leon bringing down Tobin Heath in the box — it seemed as if the US would go on to accrue another healthy scoreline, just as it did in the group stages.

Jill Ellis’ team had qualified for the last 16 having scored 18 goals in three games and not conceded, becoming the first team in World Cup history to qualify for the knockout stages with a +18 goal difference.

But before this tournament questions were being asked of the US’ defense and for the first time in France it was put through its paces and breached.

In trying to play out from defense, Becky Sauerbrunn lost possession on the edge of her box and Spain pounced with a delightful finish from Jennifer Hermoso.

The defending champion created more chances — Rapinoe twice missed opportunities to give her team the lead — but so too did Spain, catching out the Americans’ high defensive line on a couple of occasions.

After the break, Spain’s ploy of slowing the pace of the game by keeping possession was successful in frustrating the tournament favorite until Leon took a swipe at Rose Lavelle’s shin and the referee pointed at the spot.

Though it was the slightest of contacts, a VAR check rubber stamped the decision and Rapinoe coolly slotted home.

READ: Referees and VAR under the microscope in France

READ: 1999 and the match that changed women’s soccer