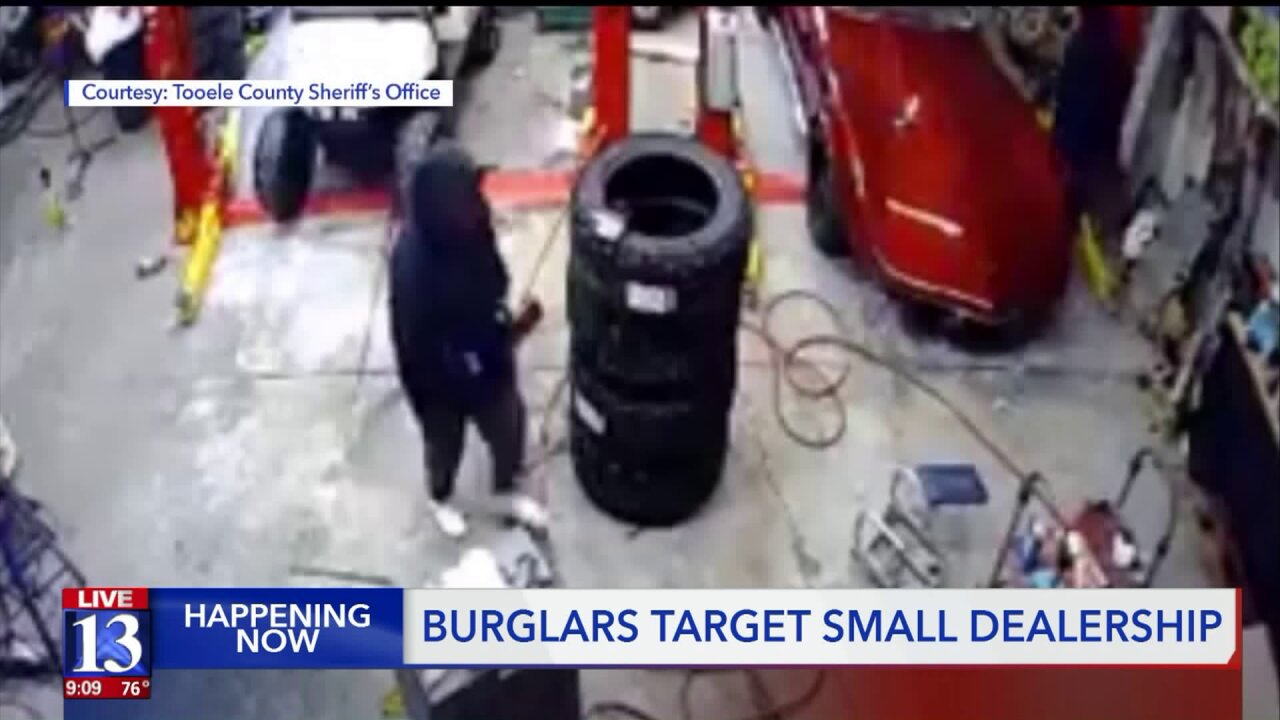 ERDA, Utah — The Tooele County Sheriff's Office and a car dealership hope the public can help them track down strange thieves who broke into a small business in a bizarre way.

In the blink-and-you-miss-it town of Erda, north of Tooele, it says "the local boys" on the sign for Bargain Buggy's.

Doubling as a small dealership and an auto detailing and repair shop, it's what they pride themselves in.

They aren't a large corporate dealership, and they're not used to the kind of crime you'd find on the other side of the Oquirrh Mountains.

Certainly not a two-vehicle heist that happened in the early morning hours of June 16.

"It baffles me as to why someone would be that blatantly stupid," Mackie said.

The several surveillance cameras in and outside of Bargain Buggy's caught the burglary.

In one video, a man pulls up in a van and peers through the front windows. He then appears to try and break the front door in with what Mackie said was a tire iron.

When that didn't work, the man decided to force his way in through the back of the shop.

"Went around the back, and drove a van through the garage door," Mackie said.

Their shop surveillance shows the aftermath of the van crashed right through the auto shop.

Mackie said the building's alarms failed to go off. He said the man stole a 2019 black Ford Escape from the dealership.

"So, he escaped in the Escape," Mackie said, with a chuckle.

A few hours later, surveillance cameras picked up two people who walked in through the broken garage door. The Tooele County Sheriff's Office said one of the people appeared to be wearing a wig.

Apparently, the people were after paperwork this time. One of the burglars kicked straight through a door to get inside an office.

"There was a few customer records that were taken later on in the morning, and that's when the alarm went off," Mackie explained. "So, they couldn't get very many."

The two took off, one in a white 2015 Chevy Silverado stolen from the dealership lot, and the other in a getaway car, which the Tooele County Sheriff's Office described as a gray Dodge Caliber.

The van was left behind, and deputies discovered it was also stolen. Bargain Buggy's called the customers whose documents were stolen, to let them know what happened, Mackie indicated.

For a small town business, it's a strange string of events.

He said they'll stay more vigilant with security from now on — a lesson learned, even in Erda.

"Hopefully we can catch him," Mackie said.

The Tooele County Sheriff's Office said one of the men is described as white or Hispanic with tattoos including on both calves, wearing dark shorts and a gray hoodie.

Anyone with information is asked to call the Tooele County Sheriff’s Office at 435-882-5600, and should request to speak with Detective David Bleazard or Sgt. Norberto Aranda.