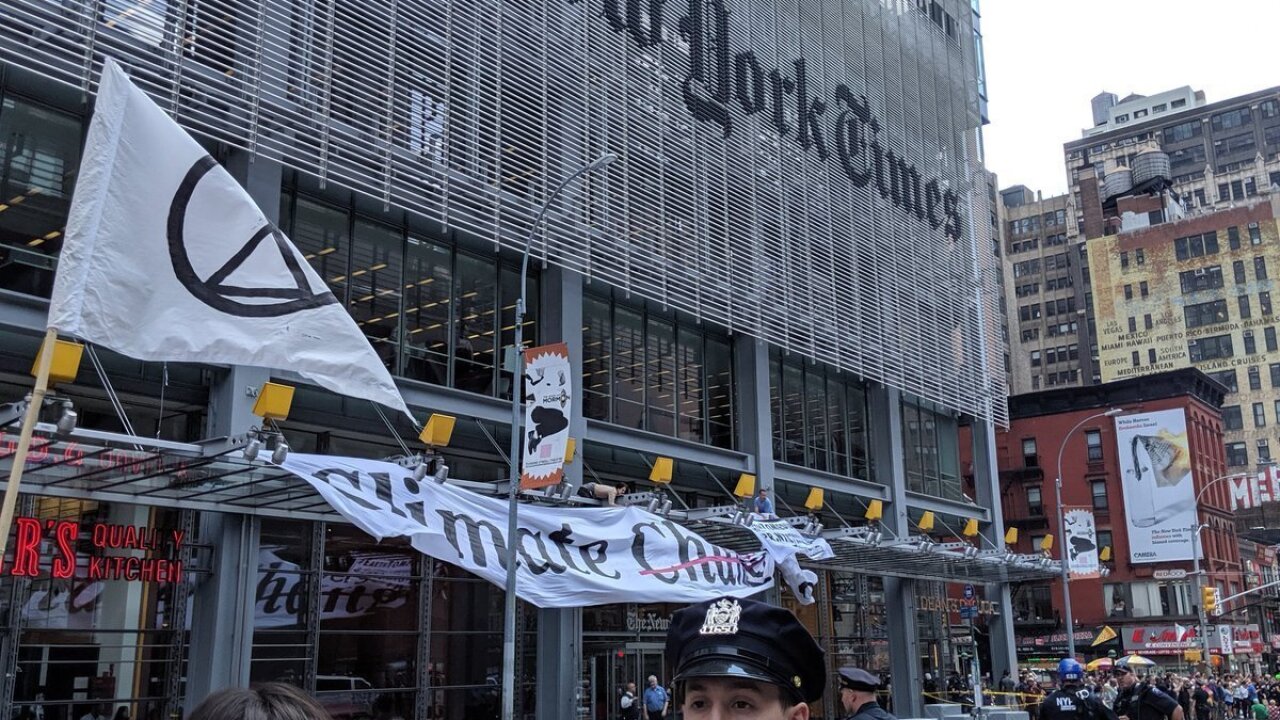 Bryant park protest by the Extinction Rebellion. Protesters put up a banner on the New York Times building and police took it down. Source: Jacob Silverman/Twitter

Sixty-six people were arrested outside of The New York Times building in Manhattan on Saturday, according to a New York Police Department spokesman, during a protest to call attention to the way news outlets cover the climate crisis.

The NYPD on Sunday amended the number of those arrested at protest from 70 arrests to 66, an NYPD spokesman said. All 66 have been charged with disorderly conduct, the NYPD said.

The protesters were affiliated with a group called Extinction Rebellion, which describes itself on its website as an “international movement” aimed at combating climate change through nonviolent protest and minimizing the “risk of human extinction and ecological collapse.”

Eve Mosher, a spokeswoman for the group, told CNN that Saturday’s protest was meant to call attention to how news outlets cover climate change.

“The New York Times can take the lead reporting on the climate emergency,” Mosher told CNN, saying the newspaper does “good reporting” but it’s “not treating it in the manner they should be.”

“They should be treating it like World War II,” Mosher said, “where there were headlines every day.”

Mosher told CNN that Extinction Rebellion respects the work of news outlets such as the Times, but “we just ask that they be more truthful and use language people understand.”

In a statement sent to CNN, a New York Times spokesperson said, “There is no national news organization that devotes more time, staff or resources to producing deeply reported coverage to help readers understand climate change than The New York Times.”

The newspaper published nearly 800 articles in 2018 about the climate and the effects of climate change, the statement said.

“We fully support this group’s right to express their point of view,” it added, “even when we disagree with it as it relates to our coverage.”