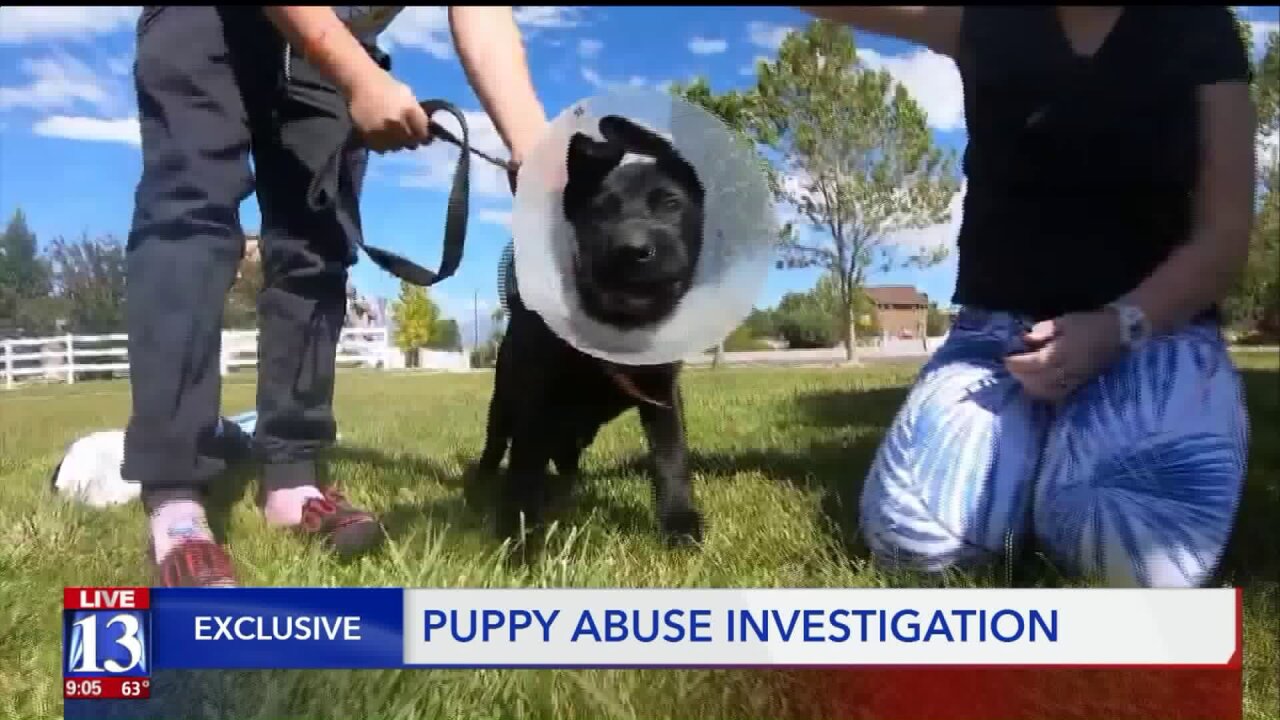 MURRAY, Utah — A woman faces a felony charge for what animal services said she did to her puppy to get the puppy to be quiet.

The rescue organization that took the pup in said the damage is so extensive, the dog now needs surgery.

Shadow, a Black Labrador-German Shepherd mix, is a playful little ball of fire.

She's got the energy of a 3- to 4-month old pup, and a bark to match her outgoing spirit.

Even with a cone of shame around her head, it doesn't slow Shadow's spunk.

Shadow is getting a lot of attention from her new foster family and friends from Celestial Zoo Pet Rescue.

The puppy deserves the extra love.

"It looks even worse in person," Facemyer said of Shadow's injuries.

She said she was shocked the first time she saw Shadow in person, after having seen photos posted online.

A close look at Shadow's snout reveals a disfigured nose and mouth, with a deep scar running all the way around.

"Left side [of her nose], it's completely open even with her mouth closed," Facemyer said. "You can see into her mouth. It's pretty bad."

Her nose got that way after her owner wanted her to be quiet, West Jordan Animal Services said.

"The owner did admit to putting a hair tie on the puppy," said Dan Eatchel, manager of West Jordan Animal Services, which is contracted to work in Murray where Shadow's owner lives.

According to a probable cause statement, Alexis Callen of Murray tied the hair tie around Shadow's mouth to keep her quiet so she could sleep.

Callen told police she put the elastic hair tie on Shadow for 48 hours.

But a veterinarian said it was probably longer than that, according to police. Veterinarian paperwork explains Shadow's mouth may have been tied for up to two weeks, based on the damage done.

"The veterinarian believed that that hair tie had been on there for longer than the 48 hours that the owner admitted," Eatchel said.

Callen was arrested and taken to jail on a felony charge of torture of a companion animal.

Animal control found out about Shadow when the rescue Celestial Zoo saw the woman's post on social media, asking to re-home Shadow because the owner couldn't pay for the vet bills.

Caylla Facemyer's cousin Amber Facemyer picked up the dog, and they took Shadow to the veterinarian and called police.

"We do see cruelty cases," Eatchel said. "But this one is more severe than most that we see."

Celestial Zoo said Shadow will need to get reconstructive surgery next week. According to paperwork from the veterinarian, Shadow can't eat or drink properly because food and water leak from a hole in her cheek.

The veterinarian expects Shadow to make a recovery, but it'll take at least two weeks after surgery.

After that, the rescue will find the floppy-eared feisty furball a new home, and a place to bark all she wants.

Celestial Zoo said the surgery will cost around $2,000. Anyone who wishes to donate to the rescue or help cover the cost of surgery can call Blue Pearl Pet Hospital in Midvale at 801-871-0600 and request the Celestial Zoo Shadow fund, or click here for the Celestial Zoo website.