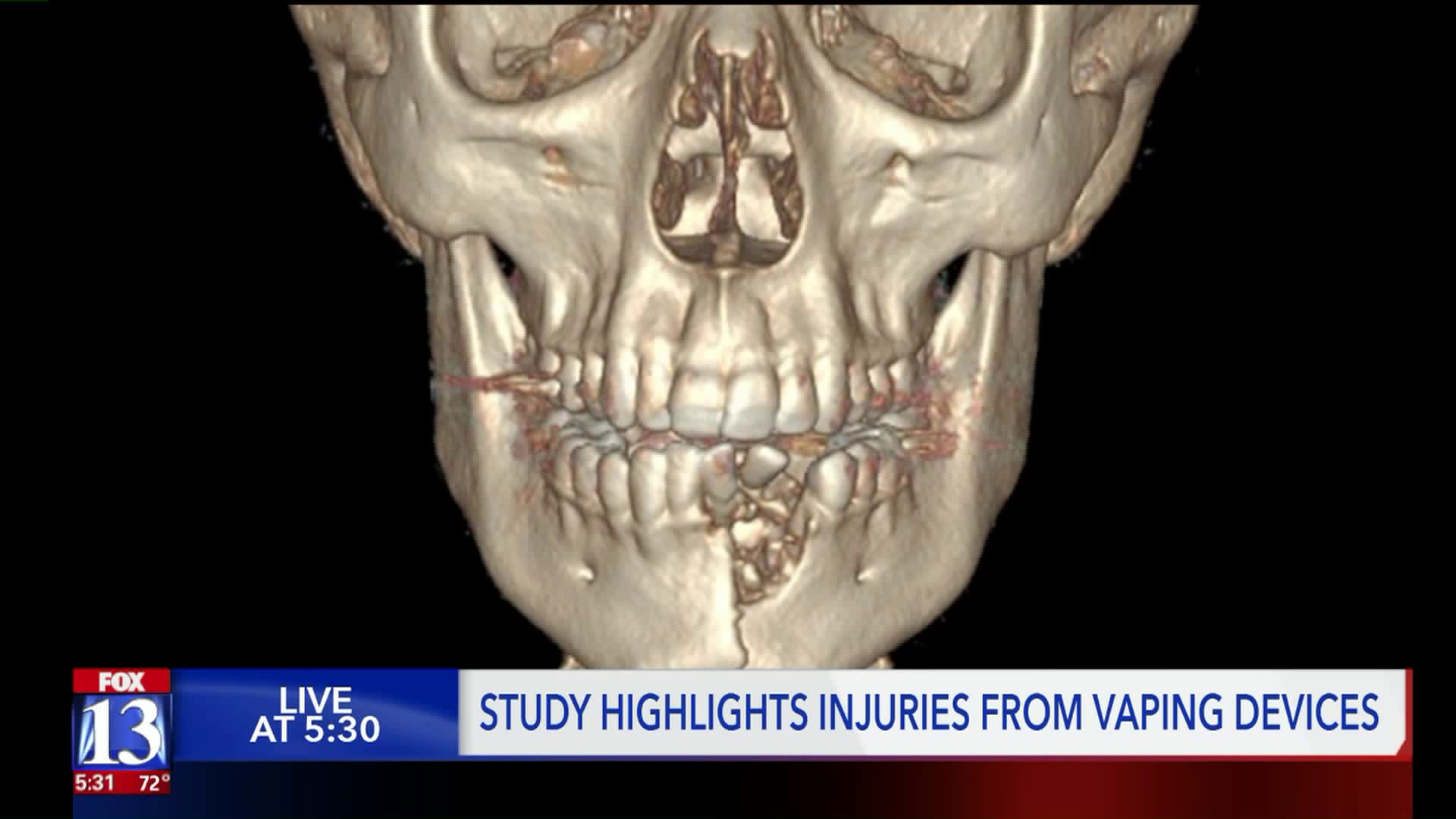 A Nevada boy was vaping when, without warning, his e-cigarette exploded in his face. The freak accident, described in a case study published Wednesday, is just one ofthousandsin recent years.

Warning: This article contains a photo some may find graphic

NEVADA – The 17-year-old traveled 250 miles with a bloody mouth, broken teeth and a hole in his jaw, trekking from a small town in Nevada to a pediatric hospital in Utah with his mother. There, doctors rushed him into surgery, working to reconstruct and repair shattered bone.

What he told doctors shocked them: The boy was vaping when, without warning, his e-cigarette exploded in his face. The freak accident, described in a case study published Wednesday, is just one of thousands in recent years.

"I said what blew up? And he goes, the vape, the vape," said his mother Kailani Burton.

"We see jaw fractures like this after motor vehicle collisions. High-speed crashes, this was a huge force that broke this child’s jaw," said Dr. Katie Russell, the trauma medical director at Primary Children's Hospital who first treated the boy. "People need to know before they buy these devices that there's a possibility they're going to blow up in your pocket, in your face."

It's unclear what type of e-cigarette was involved in the incident.

Thousands of explosions and fires

One study published in 2018 estimated that more than 2,000 e-cigarette explosion and burn injuries sent users to US hospital emergency departments from 2015 to 2017. But few are aware of just how serious the incidents can be.

The teen from Nevada said he had no idea his vape could explode, according to Russell. He repeated the line over and over again in the emergency room, she remembers, and he was still "pretty freaked out" hours after the explosion.

"At that time, in my career, I had never seen this. I never heard of this as a possibility" said Russell, who described the boy's injuries in the New England Journal of Medicine.

"I just wanted to get this out there so other people could know that this was possible," she added.

The boy Russell treated was "a tough kid," she said, and he healed well. But others have been less fortunate.

In February, a Texas man died after his e-cigarette exploded and shrapnel tore through his carotid artery. Part of the device remained lodged in the man's throat at the hospital, according to his family.

About a year ago, a Florida man was also found dead after his e-cigarette exploded during use, sending a projectile into his head. Both cases involved "mechanical mods," larger vaporizers that have more powerful batteries than many typical devices.

Both deaths were in adults, but numerous teenagers have reported burns from similar e-cigarette explosions. The injuries have mounted as experts warn of an "epidemic" of teen vaping, with almost 40% of 12th-graders using the devices, according to a report released last year.

One teen in Oregon nearly lost his eye when his vape exploded two years ago, according to CNN affiliate KYTV. Another 17-year-old told CNN affiliate KNXV in 2016 that "it was like [a] bomb going off" before her clothes caught on fire and an e-cigarette explosion left her with burns across her chest, arms and hands.

While experts and advocacy groups have long raised questions about the health effects of vaping, the risk of explosions and fires has received less attention. Some researchers, though, have sounded alarms.

In a 2016 letter published in the New England Journal of Medicine, doctors at the University of Washington Medical Center described 15 patients who had suffered from e-cigarette explosions in less than a year.

They added that "e-cigarettes remain largely unregulated" and warned that although "these incidents were previously thought to be isolated events, the injuries among our 15 patients add to growing evidence that e-cigarettes are a public safety concern that demands increased regulation as well as design changes to improve safety."

Industry groups remain wary of regulation, arguing instead that manufacturers need the freedom to easily make changes to -- and improve -- their products. "We need to make sure that we're not going to be regulated out of business," said Ray Story, the founder of the Tobacco Vapor Electronic Cigarette Association.

"The industry can always do more," Story said, but he blamed consumers for some of the accidents. While batteries may explode, he said, "a lot of that happens because of the failure of the consumer to actually charge those batteries properly."

Last year, R.J. Reynolds Vapor Company initiated a voluntary recall of 2.6 million power units for fire risk, but the FDA -- which has regulatory jurisdiction over e-cigarettes -- has not mandated any e-cigarette recalls in response to the recent explosions.

The agency said in a statement that it was "concerned" about "overheating and exploding batteries." It recommended that consumers consider "using devices with safety features, preventing loose batteries from contact with metal objects, using the correct charger and not charging [a] battery overnight or [leaving] it charging unattended."

The FDA also launched a website titled "Tips to Help Avoid 'Vape' Battery Explosions," but Russell, who treated the Nevada teenager, believes many users aren't even aware that e-cigarettes can explode -- meaning they don't seek out resources on battery safety.

"A pack of cigarettes says this can kill you," Russell said. While e-cigarettes warn that nicotine is addictive, they seem to offer little information on battery risk, she said.

The safest option, according to Russell, may be to avoid vaping altogether. "The mom actually used one of these devices too," she said. "After this, they all stopped."