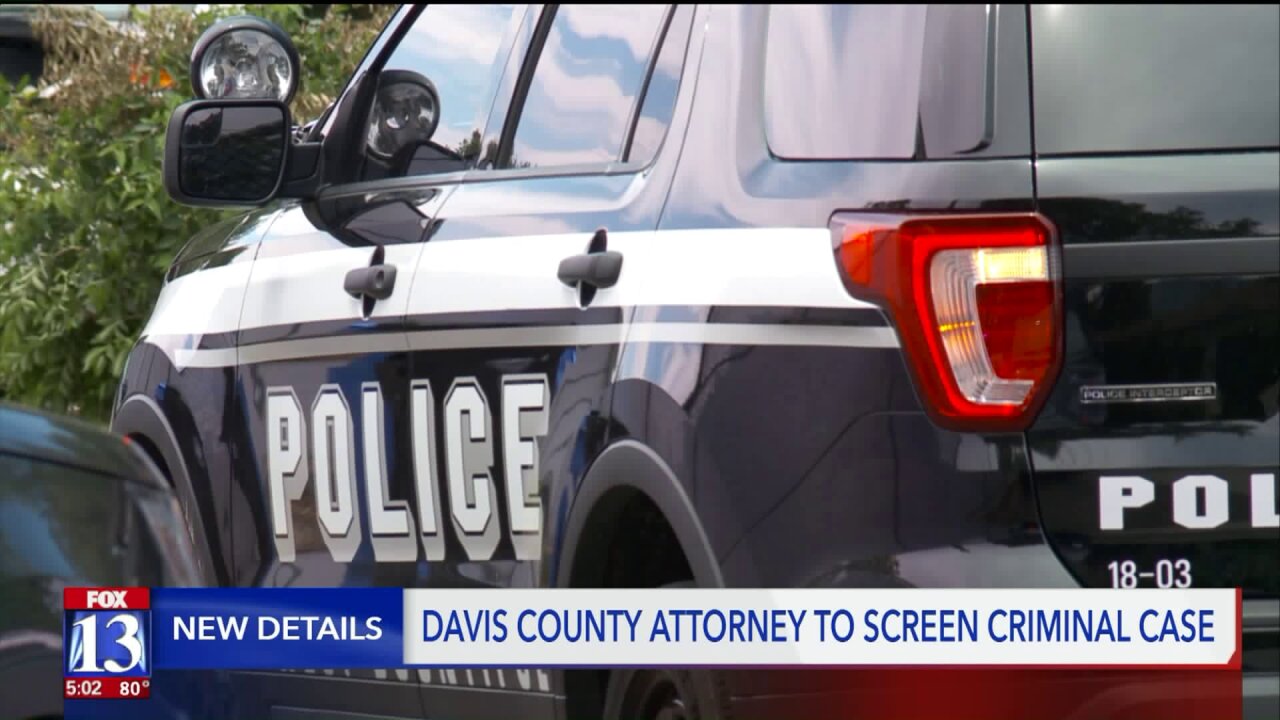 WOODS CROSS, Utah — The Davis County Attorney will review a criminal case against the Woods Cross Police officer accused of pointing a gun at a black child with disabilities.

It comes as critics accuse the police department of changing the account of what happened Thursday afternoon.

After a reported shooting in Centerville led to a police chase in West Bountiful, Woods Cross Police Lt. Adam Osoro told FOX13 who officers were searching for.

“We had a one, possibly Hispanic suspect out on foot, and we knew there was at least another suspect involved,” Osoro said Thursday.

Three hours after the incident, West Bountiful Police posted on Facebook they had caught one suspect but were still searching for a second “possible Hispanic male wearing a white shirt and black shorts or pants.”

That description differs from what the Woods Cross Police Chief Chad Soffe told reporters Monday while defending the officer.

“Two black males were said to be in the vehicle that was white that we were chasing, pursuing. One came out over the radio that one black man was driving the vehicle,” Soffe said.

“If they are looking for two black men, all of a sudden it’s acceptable that you pointed your gun at a 10-year-old’s head,” said Josianne Petit, spokesperson for Black Lives Matter Utah.

"There is no way an officer spoke to him and did not understand that this was a child and this was a special needs child. To order him to the ground and still point a gun to him is unacceptable," Petit said.

Davis County Attorney Troy Rowlings said he expects to screen the officer’s conduct as a criminal case when it’s delivered to his office.

Woods Cross Police declined to comment on this story, but on Monday, Chief Soffe was adamant the officer did nothing wrong.

Karra Porter, a Salt Lake City attorney who is helping the Hrubes family, sent this eyewitness statement to FOX 13 Tuesday. Porter said it contradicts the police department's account of what happened and "reinforces the need for an independent investigation of what actually happened."

“About 12:55 PM on June 6, 2019, I was riding in the front passenger seat of a car with three friends. We had shortly before finished work and were driving to get drinks at a convenience store. We were at the intersection of 400 N. and 800 W. in West Bountiful when a number of police cars, speeding and with sirens going, passed by. Once all the police cars passed, my friend asked to be taken home, so we turned and headed west on 400 North. While we were heading west on 400 North in West Bountiful, a police officer, with sirens on, came behind us. We pulled over to the side of the road to allow the police car to pass. Once the car passed, we continued heading west very slowly for a few yards when I looked back to my left and saw a young black boy walking in his front yard. He appeared to be walking toward his front door. He was calm, was not running, and nothing looked out of the ordinary. At that moment, I saw an officer quickly get out of a police car parked in front of the yard where the boy was walking. I told my friend driving to stop. He stopped and we were about 20 yards away from the parked police car. Upon exiting the car, the officer immediately called out to the boy who immediately turned toward the officer and put his hands in the air. The officer had his gun drawn and pointed at the boy. The gun was at the officer’s chest level. The boy’s hands were shaking. His body was shaking. He appeared very, very nervous. There was nothing in his hands. After standing with his hands in the air, trembling, for a moment, he immediately went to the ground. It was as if he threw himself to the ground, face down. The officer walked toward the face-down boy, gun drawn and pointed at the boy. As he approached the boy, a lady came out of the house and began saying something to the officer. She herself seemed very nervous and panicked. The officer stopped. He did not continue toward the boy. He then lowered the gun and appeared to move toward his car. At that point, we drove away.”
Copyright 2020 Scripps Media, Inc. All rights reserved. This material may not be published, broadcast, rewritten, or redistributed.