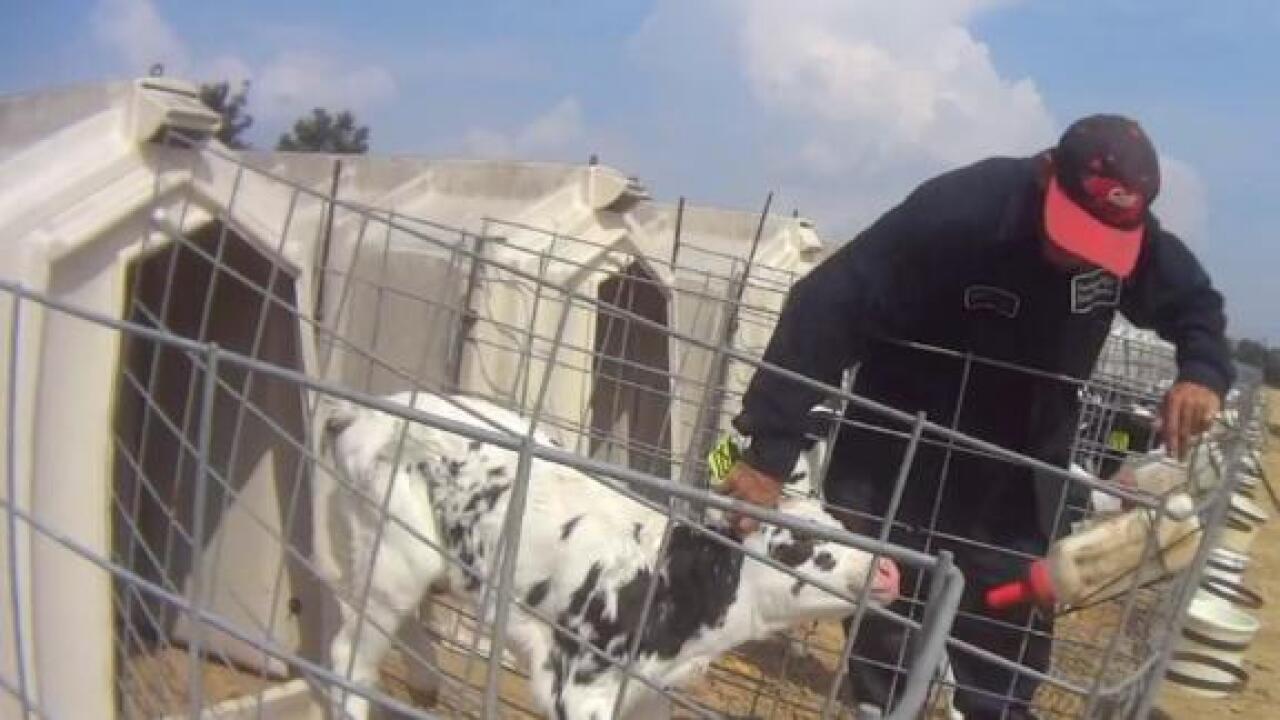 The biggest dairy producer in Indiana is under investigation after an undercover animal welfare investigator released video of employees abusing calves.

Fair Oaks Farms is a popular agritourism destination and provides daily tours for people to “explore our dairy farms for a fun-filled look at the life of a cow,” according to its website. It also belongs to the company that produces fairlife milk products distributed by the Coca-Cola Company.

ARM’s video depicts employees kicking, pushing and slamming to the ground newborn calves that did not nurse from the artificial rubber nipple during the feeding process.

Calves were deprived of adequate nutrition, and the video shows employees stabbing and hitting calves with steel rebars and branding irons, ARM said. In addition, employees would sit on the calves, which was often too much weight for the animals to bear.

Transportation of newborn calves was violent, ARM said. In the video, employees are seen throwing calves into the trailer or forcefully pushing them in.

Law enforcement is investigating the allegations

Newton County Sheriff’s Office launched an independent investigation into allegations of animal cruelty. It said it has requested the names of the employees in the video and is looking for people who witnessed the animal cruelty and failed to report it.

“We acknowledge the need for humane treatment of animals and the need to hold individuals that have gone beyond an acceptable farm management practice accountable for their actions,” Sheriff Thomas VanVleet said in a statement.

Newton County Prosecutor Jeff Drinski said he will most likely file charges against the perpetrators on Monday once the former employees are located.

“I am disgusted by and take full responsibility for the actions seen in the footage, as it goes against everything that we stand for in regards to responsible cow care and comfort,” McCloskey wrote in a Facebook post. “The employees featured in the video exercised a complete and total disregard for the documented training that all employees go through to ensure the comfort, safety and well-being of our animals.”

Fair Oaks Farms said in April that it had commissioned an independent auditor to review its animal welfare practices and the audit had come back favorably.

In a statement, fairlife said it has suspended milk deliveries from the dairy identified in the video.

“The dairy identified in the video represents less than 5 percent of fairlife’s total milk supply. Approximately 30 dairies support fairlife; therefore, we are visiting all supplying dairies in person and conducting independent 3rd party audits within the next 30 days to verify all animal husbandry practices at the farms, including all training, management and auditing practices,” fairlife said.

“At The Coca-Cola Company, we take animal welfare very seriously. We expect our suppliers to operate with the highest degree of integrity and comply with all laws, including animal welfare laws,” Coca-Cola said in a statement. “We have been in contact with fairlife about this situation and have full confidence in their management team to urgently address this issue with Fair Oaks Farms, which is a third-party supplier to fairlife.”

“At Jewel-Osco we strive to maintain high animal welfare standards across all areas of our business, and work in partnership with our vendors to ensure those standards are upheld,” said a spokeswoman for the company, which has 187 stores throughout the Chicago area, Indiana and Iowa.

While most of the public outrage has focused on the allegations of animal cruelty, ARM also wrote in its report that they suspect marijuana plants are being grown on Fair Oaks Farm property. Additionally, ARM alleged that employees smoke and sell marijuana and cocaine while working.

McCloskey denied that drugs are grown and sold at Fair Oaks Farms.

“The plants featured in the video are an invasive perennial species that is rampant on farms all over the Midwest,” McCloskey said. The owner did acknowledge that there has been employee drug use on the properties but it was addressed by law enforcement.

More than 600,000 visitors flock to Fair Oaks Farms, located about 75 miles south of Chicago, every year. The farm has 36,000 cows and is a popular agritourism destination, with a museum, restaurant gift shop and hotel surrounding it.