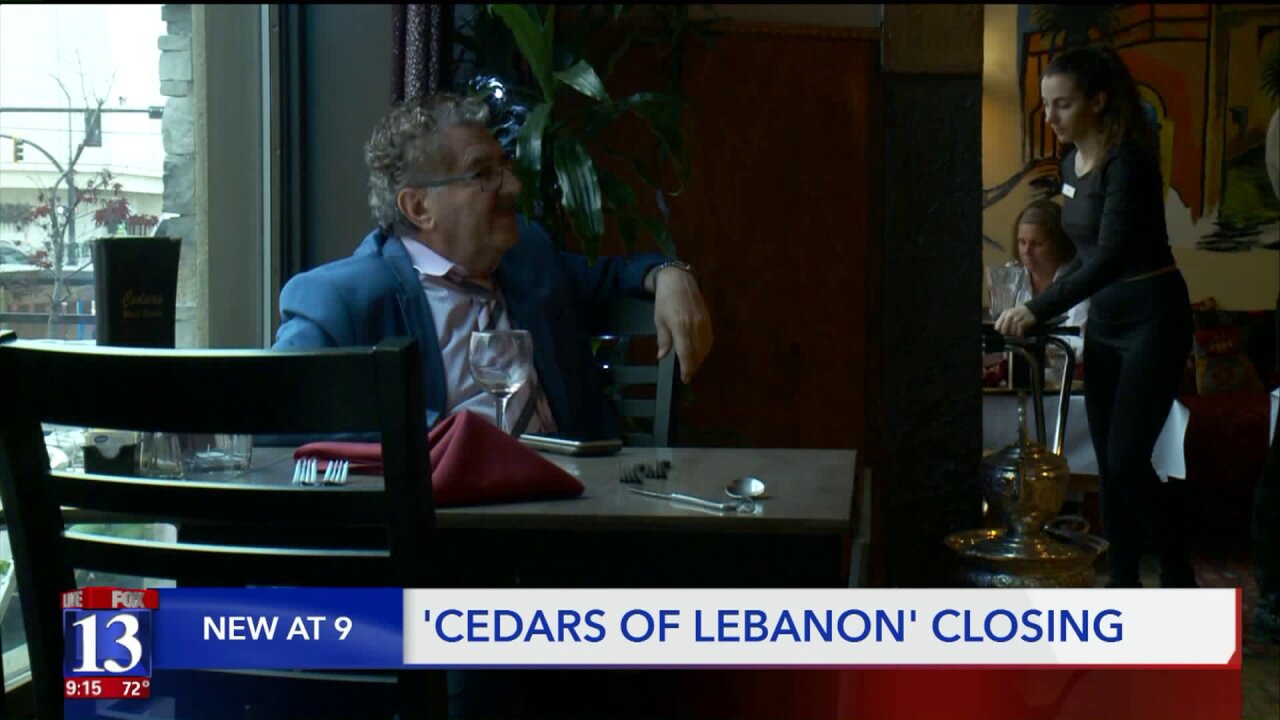 SALT LAKE CITY — It’s been in business for almost 40 years, and this week, a well-loved downtown Salt Lake City restaurant is closing its doors.

When owner Raffi Daghlian and another business partner opened Cedars of Lebanon in 1981, he said there was no other Middle Eastern and Mediterranean restaurant in Salt Lake City.

The restaurant combines the flavors of Lebanese, Armenian, Greek and Moroccan cuisine.

Thirty-eight years later, Cedars of Lebanon has continued to be a favorite.

On Thursday evening, as music from the Mediterranean Sea filled the room, the Padilla family spent a fun evening out, laughing while looking over their menus.

Tony Padilla, the family jokester, practiced some of his new material.

“You heard my Mitt Romney joke?” he asked his family.

As he set up his punchline, he also filled up his plate with feta, olives and tomatoes.

This was the last time he and his family could enjoy a meal at Cedars of Lebanon. Padilla said he read online that the restaurant was closing.

“They’re closing because they are retiring,” he explained, referring to the owners.

In the ‘Casbah’ room next to where the Padilla family sat, a wife, husband and their daughter enjoyed appetizers.

The woman at the table explained she’s been coming to Cedars of Lebanon since her parents began bringing her was a child. Now, she brings her own daughter.

The customer got up to share memories with Daghlian, who stood nearby.

“She's the third generation to come to your restaurant,” the woman said to Raffi, nodding toward her daughter.

Daghlian said he and his wife are retiring to focus on traveling and running their rug business.

A new eating establishment is set to take over the space — Indian fusion, he said.

Considering there was no other restaurant like it when Cedars of Lebanon opened, Daghlian said they’re proud they’ve made people happy and contributed to the culture of Salt Lake City.

“When we see people are happy, it just makes us happy,” he said. “We don’t want people to come and eat and go, like fast food. I want them to come here, make an evening out of it. Make an event.”

Tony’s family certainly made their trip to the restaurant an event, traveling from out of state.

Their last time at Cedars of Lebanon is also their first.

“We had a family reunion scheduled, and so we built the trip around this experience. Yes, we have,” Padilla said, with a chuckle.

They flew in from California, making sure to check out Cedars of Lebanon the week the restaurant closed. They made it just in time, for some quality family time well spent.