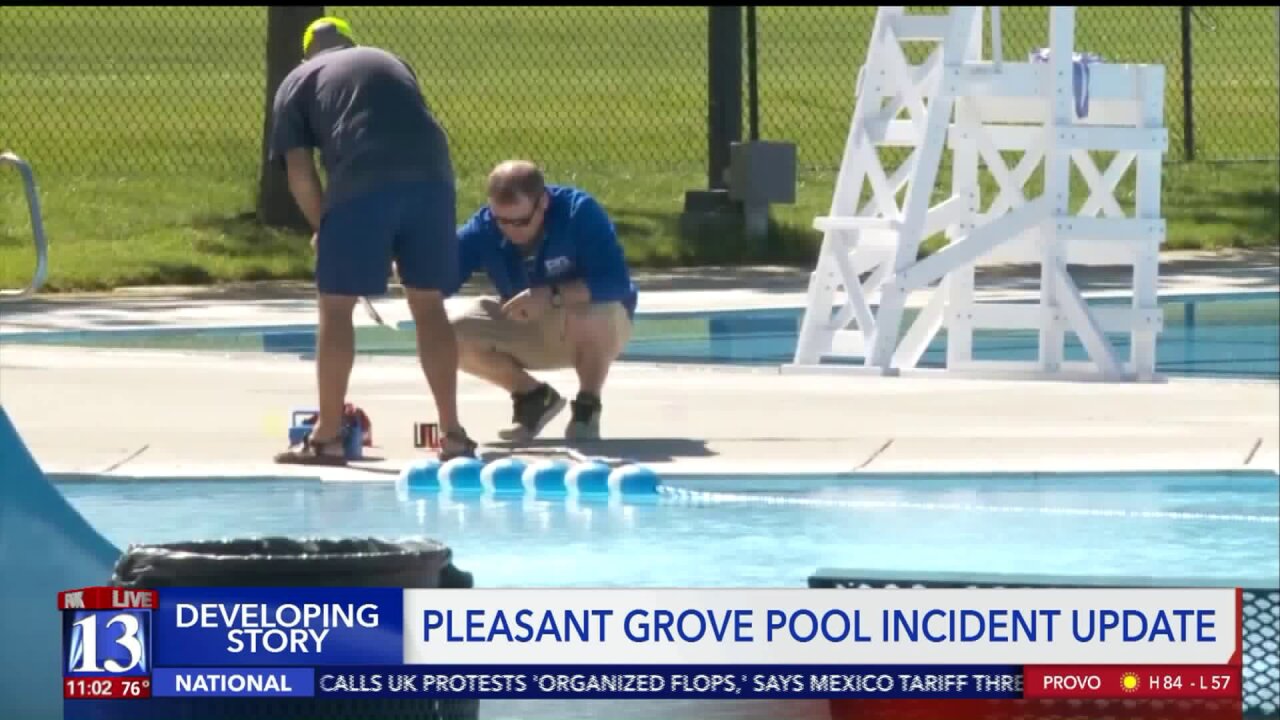 PLEASANT GROVE, Utah — Twelve people have been released and four others remain hospitalized after a chlorine pump malfunction at a Pleasant Grove pool Tuesday evening.

Captain Britt Smith said a chlorine pump failed and then turned back on, sending too much chlorine into the pool.

"The chlorine went into the water, and then it became in a gaseous state and it became airborne. And so, it affected people in that area," Captain Smiths said.

Swimmers suffered from bloody noses, coughing, nausea, vomiting and even loss of consciousness, Captain Smith indicated. They set up triage in the parking lot, and several ambulances took off with those more seriously affected.

Marie Stott said her 6 and 10-year old daughters were swimming in the pool, when she got a call that ambulances had shown up and kids were scared.

"We just stopped to check on them, and then recognized that it was a little bit more serious than we thought," Stott said.

She said her daughters were coughing, and were mostly nervous about what was going on.

"There was probably over 70 to 75 kids all out here," Stott said, describing the triage scene. "Parents were trying to find [their kids], some parents were already with them."

Stott said her husband rode with their 6-year old daughter, Molly, to the hospital. Because Molly is so young, Stott explained that paramedics wanted to make sure Molly was okay.

After 45 minutes of monitoring at the hospital, Stott said Molly was released.

In all, Captain Smith said around 50 people were affected, with ambulances taking 26 of them to the area hospitals and parents driving the rest to the hospital or somewhere else for medical treatment.

They do not expect any fatalities, but those affected will likely experience "upper respiratory irritation," Smith said.

"For being as chaotic as it was, it was handled very, very professionally," Smith said, "and it was organized to the best of the ability that we have."

One adult and 15 children were taken to Timpanogos Regional Hospital in Orem, according to a press release. Three were admitted to the pediatric intensive care unit, eight are under observation and five have been discharged, according to MountainStar Healthcare.

The pool will stay closed until the problem is fix. A sign on the door Tuesday evening indicated it would reopen on Wednesday, but Captain Smith said he wasn't sure how long it would be.

"It's tragic that it happened at all," Captain Smith said. "Of course we're going to do everything in our power to determine and isolate exactly what happened, so that it never happens again."