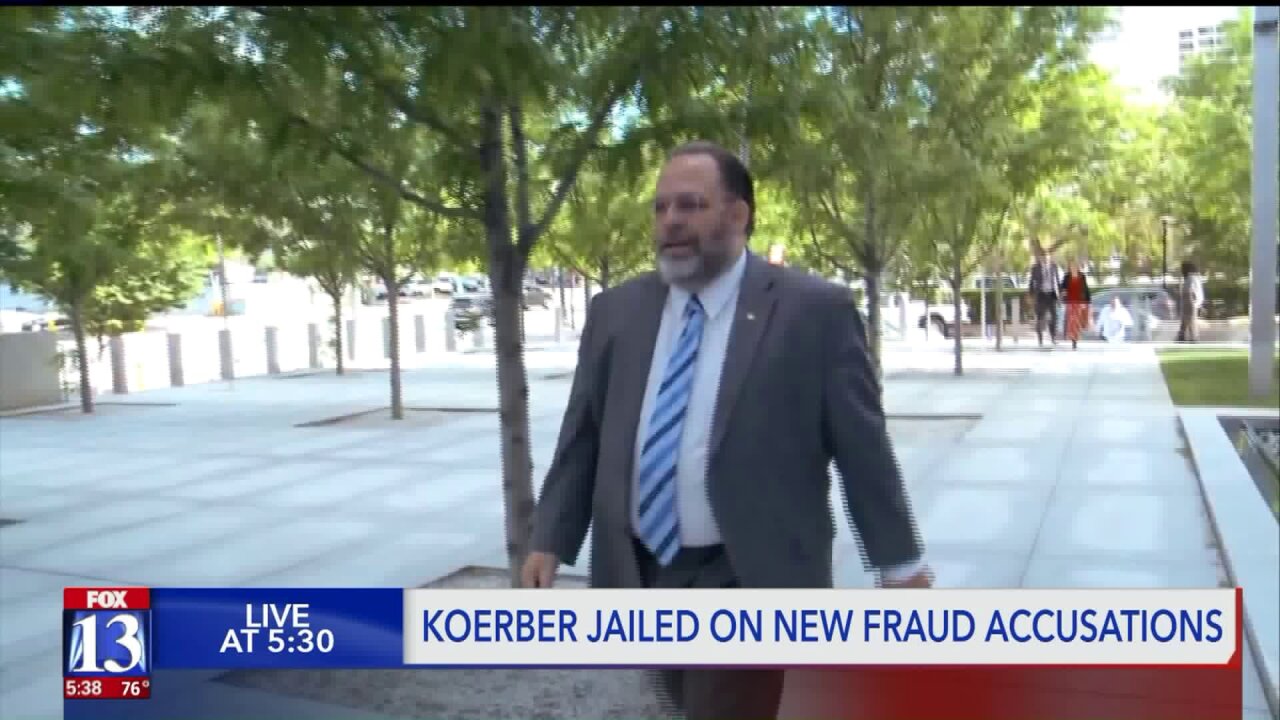 SALT LAKE CITY -- Rick Koerber walked into the federal courthouse on Friday, but he didn't walk out.

Instead, a federal magistrate judge ordered him jailed over new accusations of fraud.

Koerber, who was convicted last year in what federal prosecutors allege was one of Utah's biggest fraud schemes, was accused of a new fraud on Oregon's Court of Appeals. It was an unusual hearing that brought in a former state lawmaker and invoked the name of Ammon Bundy, who led a standoff at an Oregon wildlife refuge.

"He was convicted of committing of fraud here in Utah and we argued that was a pattern of deception that continued," Assistant U.S. Attorney Aaron Clark told FOX 13 outside court.

Koerber has been under a cloud of suspicion for a decade. Once known as the "Free Capitalist" on billboards and the radio, he was accused of perpetuating a $100 million Ponzi scheme that involved numerous victims. Koerber was accused of spending investors' money on real estate, living expenses, a pair of Ferraris and even funding a horror film called "Evil Angel," in addition to paying interest to other investors.

Federal prosecutors tried three times to convict him. The first time, a federal judge threw out the case after ruling prosecutors violated Koerber's speedy trial rights. That was reversed on appeal. Then, a jury deadlocked and a mistrial was declared. Last year, a jury convicted him.

On Friday, federal prosecutors said Koerber was involved in an attempt to deceive Oregon's Court of Appeals in a $4 million real-estate case. He was doing paralegal work for former state lawmaker and attorney Morgan Philpot, who needed him to serve process in the appeal on a deadline.

Koerber is accused of claiming the papers were served on March 2 through a commercial delivery service. Federal prosecutors alleged that service was a company Koerber created under an alias "Derrick Roebuck" that wasn't re-registered in Utah until March 6.

"Koerber involved himself in this scheme to deceive an Oregon court by creating the perception that the notice of appeal was transmitted to a commercial delivery service in an arm’s length transaction, when in reality the filing was deceptive and untimely," prosecutors wrote in a court filing.

The woman who actually served the papers was a supporter of Ammon Bundy, Philpot said on the witness stand on Friday. He testified he paid $209 to Koerber's company and another $300 to her.

U.S. Magistrate Judge Paul Warner called it "peculiar" and questioned why Philpot would do that when he could have spent $50 to use FedEx.

Koerber's defense attorney insisted he did nothing improper. Kathy Nester said the feds knew of Koerber's legal consulting company and he renewed it properly. The alias also wasn't illegal. His brother-in-law testified "Derrick Roebuck" was an anagram of "Rick Koerber" because of the publicity surrounding his criminal case.

Nester argued that Koerber was hired to do a job and he did it.

"This pattern of deception has to end. It just has to end," the judge said. "It's been going on too long. And today ends that."