Utah officer rescues dog being attacked by raccoon in pond 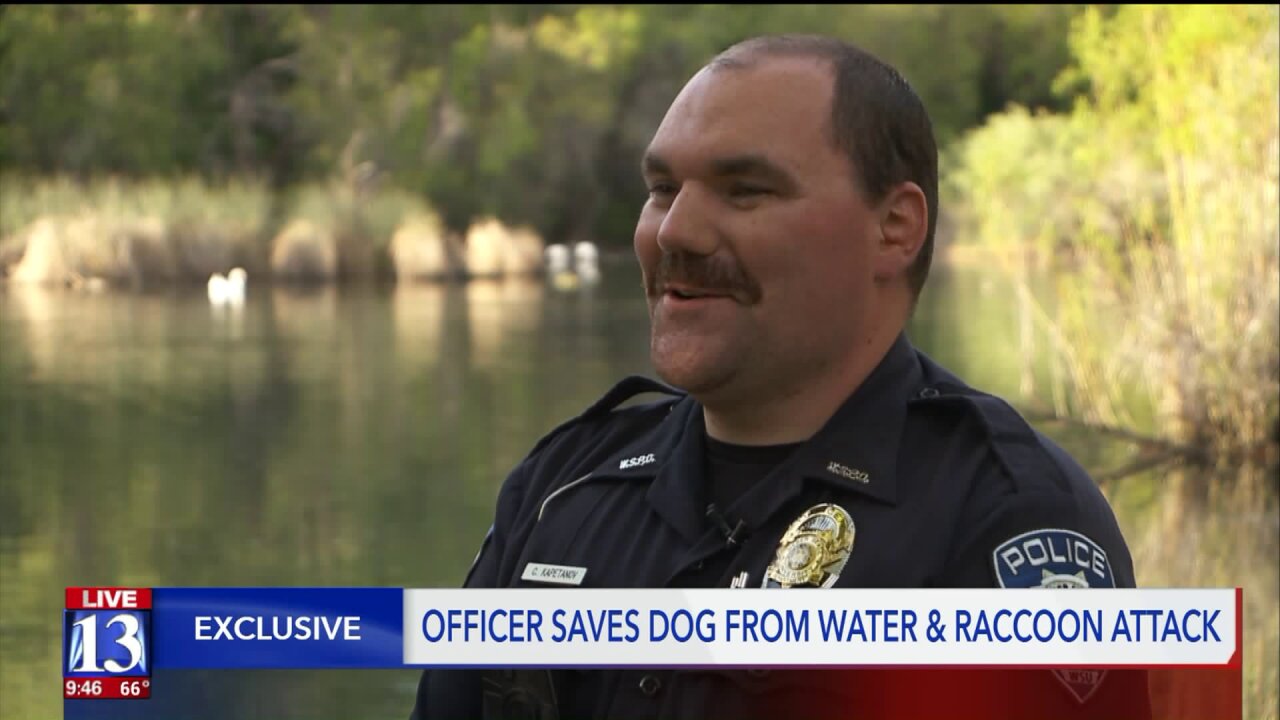 WEBER, Utah – Weber State Police are applauding the efforts of one of their own for answering an unusual call to service.

As the saying goes, "Every dog has its day." For Officer Cameron Kapetanov, that day was Thursday.

“I was just thinking, I did good today,” Kapetanov said with a smile.

Thursday afternoon he received an abnormal plea for help. He was directing traffic at a local graduation ceremony when a group of kids, accompanied by their adult neighbors, approached him and asked for help in retrieving their dog after it got loose from their house.

“We followed them up here to what we thought was going to be a simple, kind of, ‘come here boy,’ kind of incident,” Kapetanov explained.

However, when he and his fellow officer arrived at the nearby Bleus Pond, that wasn’t the case.

“You could only hear the dog and that it was in trouble,” Kapetanov said as he stood at the edge of the water looking over a marsh area about a dozen feet away.

“[We] didn’t know if [the dog] was submerged or drowning or stuck, but we knew it wasn’t coming to us so we had to go to it,” he added.

So, he did what any officer would have done.

“I made the decision to take off my gear and go for a swim,” he smiled.

The water that stood between him and the family pet — smelled pretty much like it looked, dirty and questionable.

“It’s pretty gross, I was considering going to the hospital to make sure I had all of my shots up to date,” he laughed.

Of course, the water didn’t stop him.

“Those instincts just kick in and no matter what lies in your path, you just go for it and you do your job and you come back and laugh about it, soaking wet and smelling awful,” Kapetanov grinned.

Little did he know, yet another surprise would be waiting for him on the other side.

“[The dog] was being attacked by a raccoon,” he said.

His presence was enough to scare away the hissing critter, leaving just him and the dog – which was lodged waist-deep in mud and debris.

“I had to go in and hover over it, grab its leash and get it unstuck from the mud and the brush,” Kapetanov explained.

By the time he got it back to the edge of the marsh, “both of us were dog paddling like we’d never dog paddled before!” he said.

It may not have been the typical hero moment, but in that moment, he was the only hero his community needed.

“I didn’t save any kid from a burning building like firefighters do,” Kapetanov said. “Handing that leash off, seeing [the kids] hug that animal, was a confirmation that I’m in the right business."