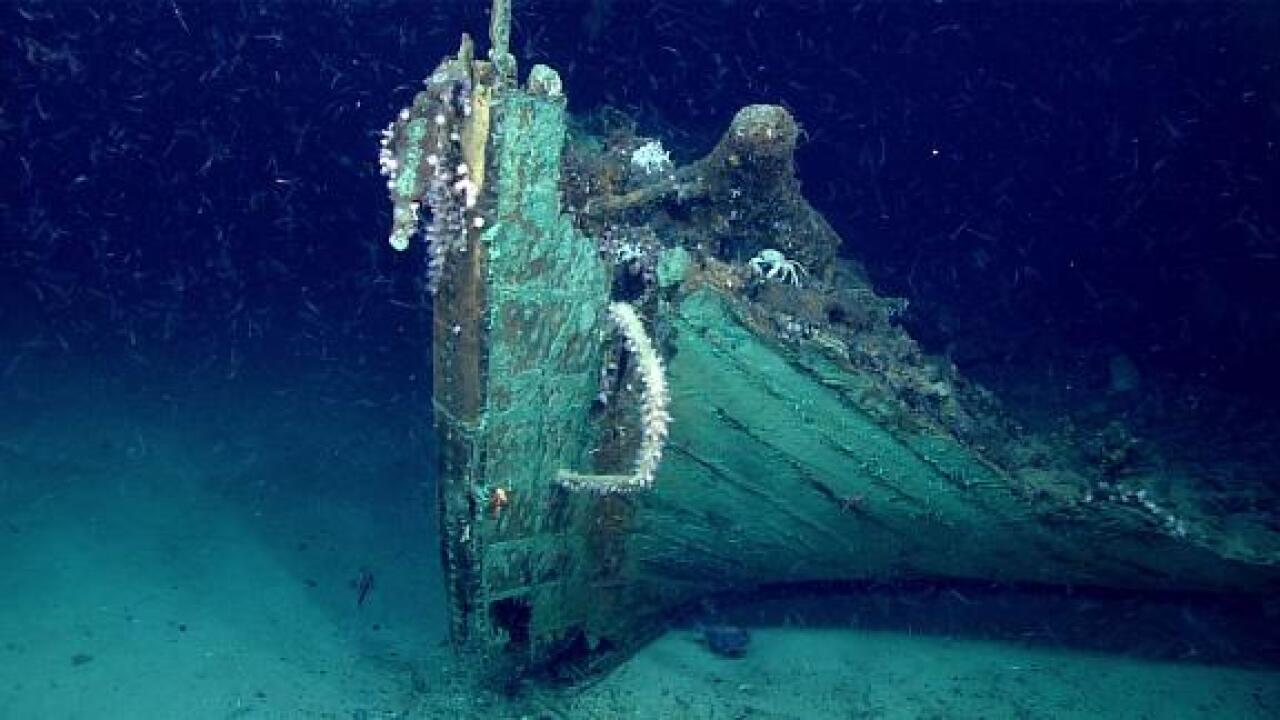 The hull of a ship, still sheathed in copper, and the numbers “2109” on a rudder suddenly appeared in the depths of the abyss.

It was an “unexpected and exciting discovery” sea floor explorers from the National Oceanic and Atmospheric Administration made earlier this month while conducting a routine test of their new remotely operated vehicle, or ROV, in the Gulf of Mexico, NOAA announced.

The wreck of what appears to be a mid-1800s, 124-foot-long (37.8 meters) wooden sailing vessel was first picked up May 16 by sonar on the ROV, named Deep Discoverer. Construction features such as the form of the stern and bow, the body of the hull, and the remains of the windlass gave hints that the vessel was built in the mid-19th century.

The discovery was made about 160 miles from shore, near the edge of the Florida Escarpment, in about 1,640 feet (500 meters) of water, officials said Thursday. The escarpment is a steep slope on the west coast of Florida where the sea floor plunges rapidly from relatively shallow waters.

While the vessel’s rig, trade, nationality and crew remain a mystery, there is some evidence that the ship “caught fire and was nearly completely consumed before sinking,” NOAA explorers said. Exactly when that might have happened is still a question.

The hull is pretty much intact up to the water line, thanks to the copper sheathing protecting the timber, high-resolution footage taken by the ROV shows.

“Marine life is prevalent on the wreck, except on the copper sheathing which still retains its antifouling ability to keep the hull free of marine organism,” NOAA said.

Above the water line, though, the structure is missing and there are not many traces of the standing rigging, the agency said.

“Furthermore, a number of timbers appeared charred and some of the fasteners were bent, which may be an indication of burning,” it said. “This may explain the lack of artifacts from the rigging, decks, and upper works, as well as the lack of personal possessions.”

Specialists stumbled upon the wreckage while conducting an “engineering dive” to “test, calibrate, and integrate equipment and train personnel in order to ensure the collection of high-quality data throughout the remainder of 2019,” NOAA said.

They extended the ROV’s dive by three hours so they could gather more information about the ship’s fate.

The ROV also recorded video as marine archaeologists from around the United States tuned in to assess the discovery. Experts will analyze the findings in coming months to try to learn more, NOAA said.