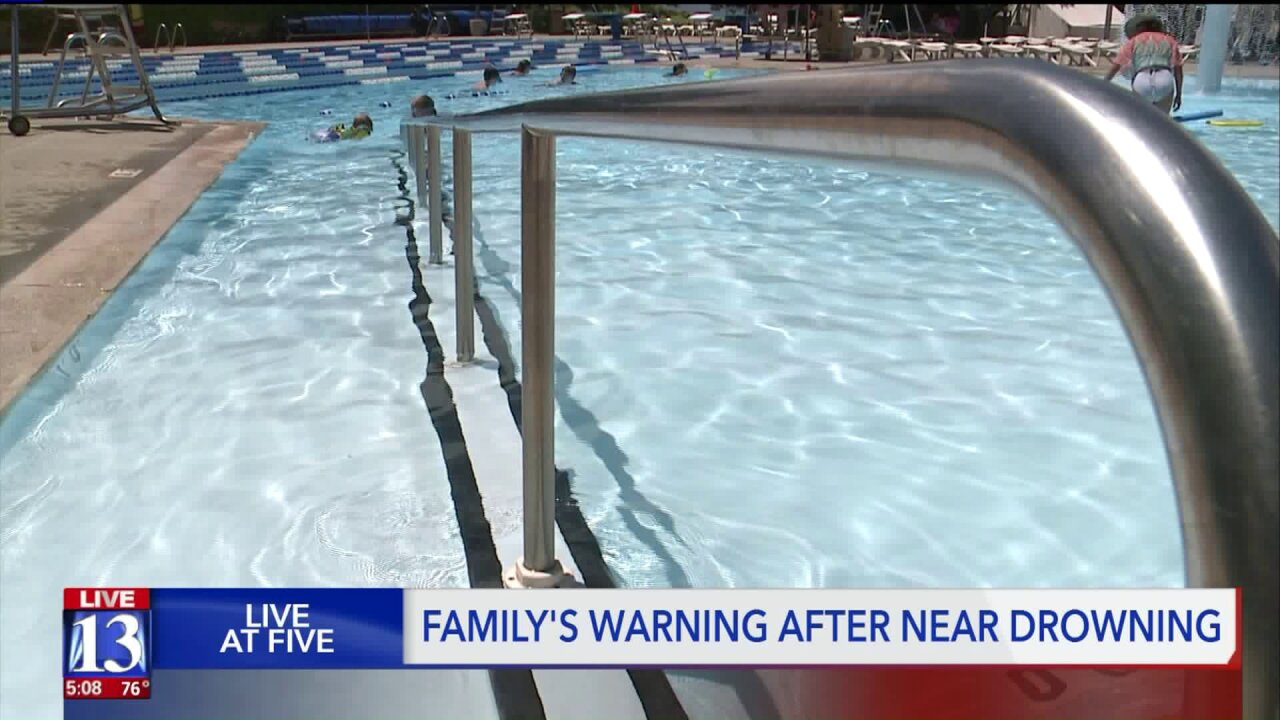 SALT LAKE CITY — Summer is just around the corner, and with summer comes swimming. But before you dive in, a grandmother is sharing her cautionary tale.

In August, Chris Miles was watching her 2-year-old grandson Nathan, along with some of her other grandkids, while Nathan's parents were in the hospital with their new baby Sam. It was a hot summer day, so they went in the pool.

“We decided to get out and go in the house for a little bit. That was my first mistake,” Miles said.

Miles took the kids inside but forgot to close the pool and lock the door. She went upstairs for a moment, and when she came back down, Nathan was missing.

“One of my grandsons said, 'Do you know where Nathan is?' And the fear struck my heart,” Miles said.

She ran outside but didn't see any movement in the pool.

“As I kept walking and got closer to the edge of the pool, I saw him upside down in the pool next to the edge. I didn't know CPR, but I had to do something. This is my grandson. Oh my gosh. I was dying inside,” she said.

She flipped him over, tipped his head back and blew into his mouth. Water came rushing out and she screamed for help. One of the other grandkids called 911, and Nathan was rushed to Primary Children's Hospital.

“I had to make that horrible call to my son and daughter to tell them what had happened,” Miles said.

“I could see the pain on his face and his lip quivering, and at that instant, I knew something was terribly wrong,” said Nathan’s mother Allie Miles.

When Nathan's parents arrived at the emergency room, doctors weren't initially sure what would happen. They knew he was going to survive, but there was the possibility of brain damage. Within a few hours though, he popped up in his hospital bed.

“He's talking in full sentences, and that's when I knew my little boy was back,” Allie Miles said.

Nathan ended up spending a few days in Primary Children's Hospital, but he walked away without any long-term injuries.

“Not all families get this lucky and get to have this perfect outcome that we experienced,” Allie Miles said.

He also walked away without any trauma. In fact, he was asking his parents during Friday’s news conference if he could get in the pool.

According to Primary Children's Hospital, drowning is the second leading cause of death for children up to age 14 in Utah. It’s a statistic that now hits close to home for the Miles family.

“We call this our miracle,” Chris Miles said.

Primary Children's Hospital recommends always having an adult watch kids who are swimming and if a child is missing, always check nearby water first.