Wellness Wednesday: Protecting your family from skin cancer this summer 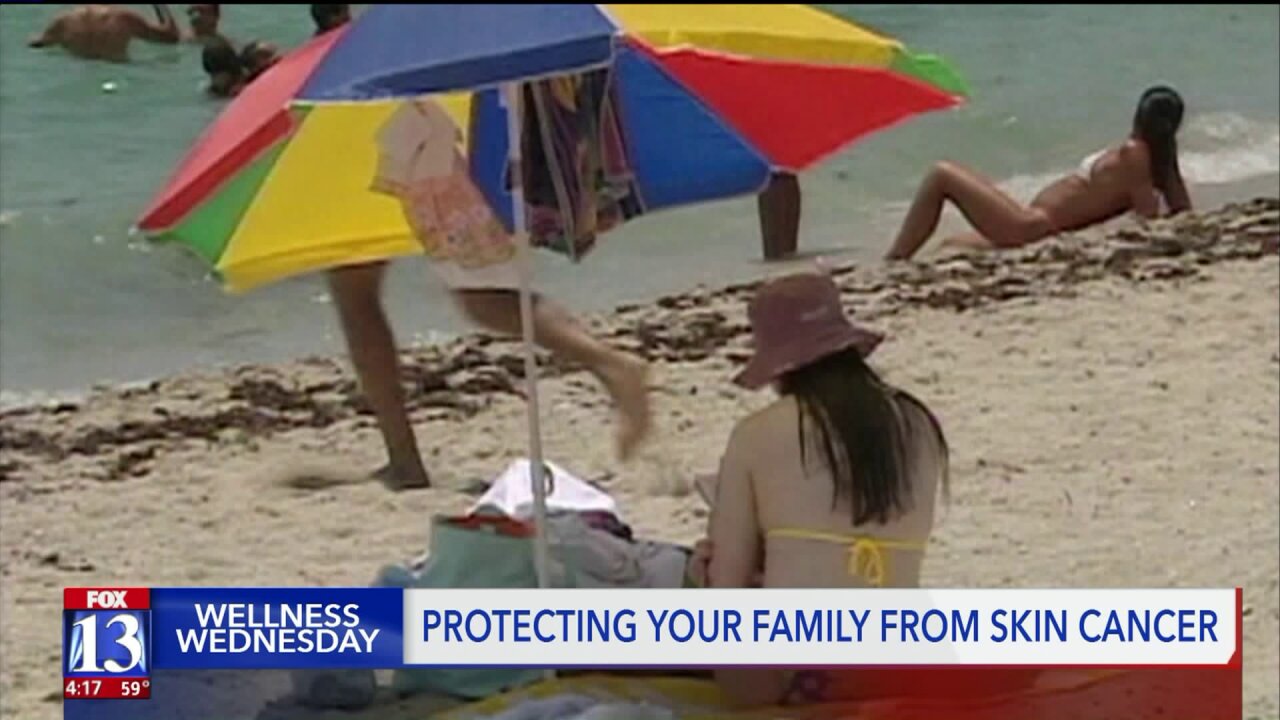 SALT LAKE CITY - Utah has the unfortunate distinction of having the highest rate of melanoma in the nation—a rate more than double the national average. One area - the Summit County area - has a startling rate of over 70 cases for every 100,000 people.

Despite increased public awareness, the most recent data shows that Utah’s melanoma rate has continued to rise steadily every year, more than doubling in the past 17 years, from 20 to 42 cases for every 100,000 people, according to the Utah Department of Health and the Utah Cancer Registry.

Why is the Melanoma Rate So High in Utah?
Besides being a state with a majority of white residents whose fair skin is a risk for melanoma, health officials think the high melanoma rate could be related to Utahns outdoor lifestyles. Why? It’s related to the rays.

There are two types of ultraviolet rays that penetrate Earth’s atmosphere and reach your skin: ultraviolet A (UVA) and ultraviolet B (UVB). UVB rays are the main cause of sunburn. The intensity varies by time, season, and location, but the most significant amount of UVB hits the U.S. between 10 a.m. and 4 p.m. from April to October. However, UVB rays can burn and damage your skin year-round, especially at high altitudes and on reflective surfaces such as snow or ice, which bounce back up to 80 percent of the rays, so that they hit the skin twice.

UVA rays penetrate deeper into your skin and are responsible for skin aging and increase your risk of melanoma. UVA rays are present with relatively equal intensity year-round during daylight hours. Unlike UVB rays, they can penetrate clouds and fog.

Overall, the sun’s UV rays are more intense at higher elevations. At 10,000 feet, you’re 70 % more exposed to UV rays than at sea level.

Melanoma is the Deadliest Skin Cancer
Melanoma cancer accounts for about 1% of all skin cancer cases, but the vast majority of skin cancer deaths. Although melanoma occurs most often on the skin, it can develop in the eye or the lining of the nose, mouth, or genitals.

In 2018, it was estimated that there were 91,270 new cases of melanoma in the United States. 55,150 cases of invasive melanoma occurred in males and 36,120 cases occurred in females. Of those, 9,320 cases resulted in death from the disease.

Treatment and Survival
Treatments are available for all people with melanoma. Melanoma can quickly spread to other parts of the body, so it is important to detect and treat melanoma in its earliest stages. When melanoma is detected and treated in its early stages, the chances for long-term, disease-free survival are excellent. In fact, for localized melanoma (84% of all cases), the 5-year survival rate is approximately 99%.

Prevention: Tips to Reduce Your Risk of Skin Cancer
• Establish an easy, daily sun protection regimen you can follow all year long
• Apply sunscreen each morning and reapply every two hours. In addition to daily sunscreen use, you should cover up with clothing, broad-brimmed hats, and UV-blocking sunglasses.
• Seek the shade, especially between 10 a.m. and 4 p.m., when the sun’s rays are strongest
• Continue using sunscreen during the winter and on cloudy days.
• Both UVA and UVB rays play a role in the development of melanoma—and the rays can be just as powerful in winter or through clouds as they are on a sunny summer day.
• Make sun protection a daily habit, no matter the season and weather.
• Do not let your skin burn. On average, a person’s risk for melanoma doubles if he or she has had more than five sunburns. It’s important to take the time and effort to prevent sunburns in the first place. Protect your skin.
• Check your skin. It is recommended that adults over the age of 18 see a dermatologist once a year for a full skin exam. Adults should also perform monthly self-exams, looking for new or changing moles or lesions that should be examined by a healthcare provider.
• No cancer, including melanoma, can ever be prevented with 100% certainty. Some risk factors for melanoma, such as skin type and family history, cannot be changed. Sometimes melanoma may develop despite your best efforts to prevent it.
• The good news is that the risk factors for melanoma are well known. Since the primary risk factor for melanoma is exposure to ultraviolet (UV) radiation, learning how you can protect yourself from UV radiation can help you reduce your risk of melanoma.