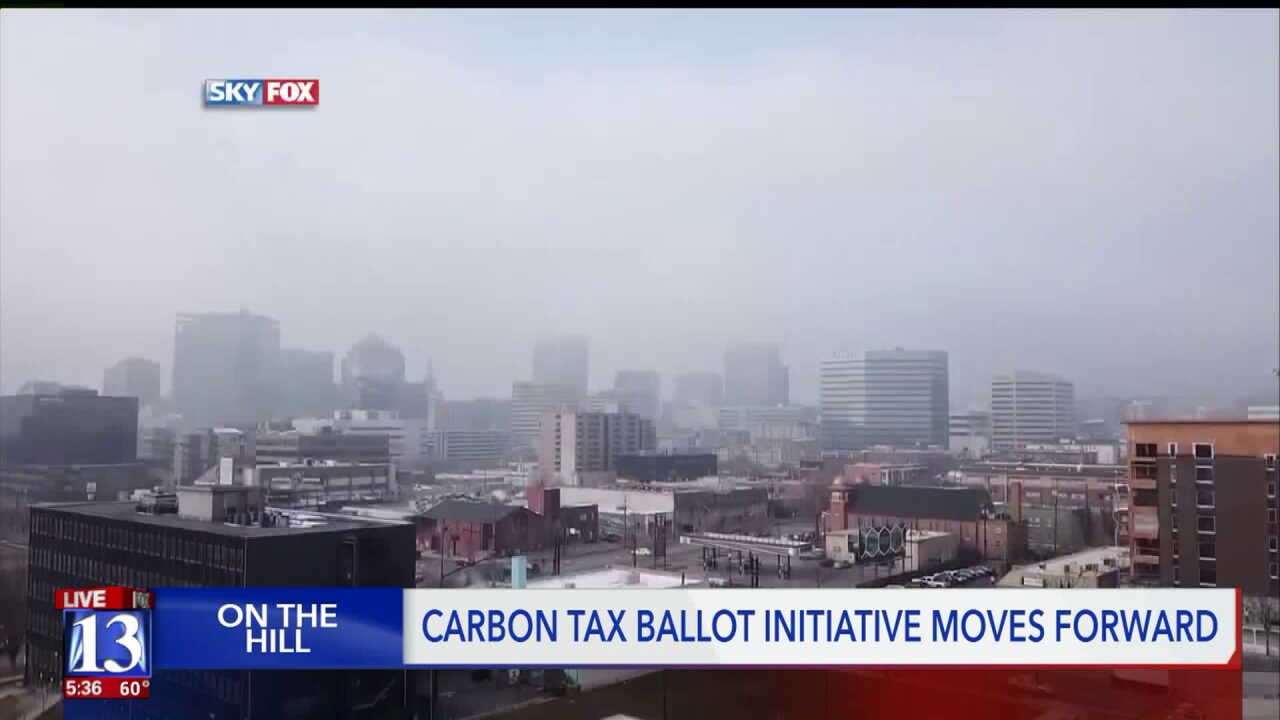 SALT LAKE CITY -- A proposed ballot initiative that would impose a carbon tax is moving forward.

The campaign calling itself "Clean the Darn Air" announced on Friday it had completed the required public hearings and was awaiting a fiscal note. Once that's done, volunteers can begin collecting 116,000 signatures in order to qualify for the November 2020 ballot.

"The basic idea is to tax pollution instead of potatoes," said Yoram Bauman, one of the sponsors of the initiative.

The proposed ballot initiative would impose a carbon tax on gasoline and other pollution sources. It would drop the tax on groceries and earmark funds for clean air initiatives and rural Utah economic development.

"It’s $12 per ton of CO2. It’s about 11 cents a gallon gasoline, a penny a kilowatt hour of coal-fired power," Bauman told FOX 13. "That’s not nothing, but on the other hand you’re seeing the elimination of the state sales tax on grocery store food and investments in air quality and rural economic development."

Outside the Utah State Capitol, where roughly a dozen students held a day long demonstration to call attention to climate change, there was support for the idea.

"The climate is changing and no one is paying attention to this problem," said Raquel Juarez, who just graduated from Ben Lomond High School in Ogden.

She called the proposed ballot citizen referendum "exciting" and said she looked forward to voting on it.

"We hope for them to join us in this movement to get our politicians to pay attention to this climate crisis that is going to affect future generations," she said.

The proposed initiative has the potential to impact Utah's tax reform discussions, which are getting under way on Capitol Hill. Lawmakers are considering major rewrites of the state tax code with public hearings set to begin next week.

"Sen. Hillyard and I have been consistent when saying we will look at all potential options. However -- and speaking personally -- I would say that a ballot initiative in and of itself is not a motivating factor to say yes or no to any one possible solution," House Majority Leader Francis Gibson, R-Mapleton, told FOX 13 in a statement. "Our task force will work with many groups and listen to many options to develop good tax policy."

The citizen referendum is expected to begin collecting signatures in June. Under new initiative rules passed by the Utah State Legislature, they have until mid-February to collect a percentage of active voters across the state, but will be able to see where they stand with signature gathering (and removal) in almost real-time.

There is also cynicism among many voters after the Utah State Legislature replaced approved initiatives on medical cannabis and Medicaid expansion with their own bills. Bauman said he believed if the carbon tax initiative passed, lawmakers would still respect the will of the voters.

"I think what you saw from there is the legislature respected the broad wishes of the people but tweaked the details," he said. "I think if the people of Utah make a statement they want clean air, they want rural economic development, they don’t want to pay sales tax on grocery store food, they want to pay a little more for fossil fuels to make that happen, I’m reasonably confident the legislature will go forward with that big picture."